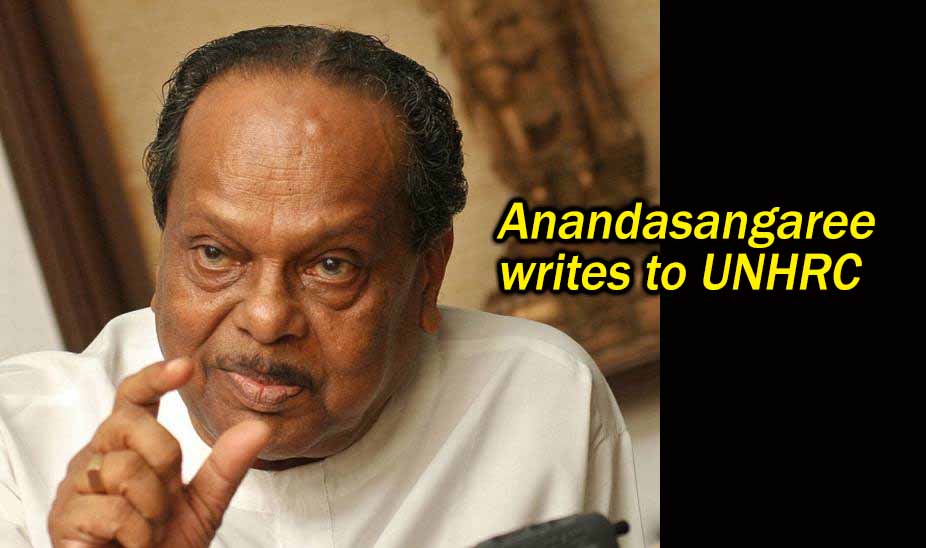 (Lanka e News - 05.April.2019, 11.30PM) General Sevretary of the TULF Mr. V. Ananda Sangaree has written an open letter to the UNHRC. Here are the following.

03.04.2019
Her Excellency Michelle Bachelet,
High Commissioner  for Human Rights
And The Representatives of The Member Countries of The UNHRC
Palais De Nations
Ch-124 Geneva 10, Switzerland

Your Excellency and Representatives of Member Countries

This Request comes to you from one of the most senior Tamil politicians of Sri Lanka who had  been a Member of Parliament for over 17 years   and  winner of UNESCO’ s  Madanjeet   Singh award  for the Promotion   of   tolerance  and non-violence for the year 2006. I am the leader of  the Tamil United Liberation front founded 47 years back in 1972. Two eminent and  prominent  lawyers of Ceylon’s early  forties  of  the last  century,   Hon.S.J.V.Chelvanayagam, QC and Hon G.G.Ponnambalam,QC agreed, to ignore their 23 years of  political  enmity ,to  merge their political parties llankai Thamil Arasu katchi  and All Ceylon  Tamil Congress respectively.  They formed the new Tamil  Front on 14.05.1972 named Tamil United Front  subsequently  renamed as Tamil United  Libration Front, with clear intention of not reviving their former  parties anymore and left it as their legacy for the Tamil people to look after all their interests.

The merger of the two major Tamil political parties, at the time when the government was preparing  to adopt a new Republican Constitution in 1972, was an important event in the history of Sri Lanka and also a land mark. The formation of the TULF at that time was a compelling need, to bring the two parties under one banner and was acclaimed as a great achievement, by the Tamils spread  all  over the world. The armed groups operating at that time, found the new formation, which was very strictly committed to non-violence, as a stumbling block for their progress and had opted not to join the new party. In spite of several obstacles it faced the TULF made very good progress. It is very wrong for anyone to say that non-violence failed and gave way to armed struggle. However, due to series of assassinations in the leadership, the TULF suffered a setback which gave way for a new alliance. The secretary of the TULF at that time, Mr.R.Sampanthan having failed in his efforts to take the TULF as a wing of the LTTE, opted to contest on the Federal Party symbol “the House”. He submitted his nomination paper announcing that they were submitting the nominations on behalf of the LTTE. Their election manifesto for the 2004  General Elections declared LTTE as National leaders and Sole Representatives of the Tamil people. The betrayal of Mr.R.Sampanthan left the TULF with no option other than to contest the General Election of April 2004 as an independent group. Those gross betrayals of Mr.Sampanthan and his team have brought ruin to the Tamil community with no hopes of easy revival.

It was only at the election held on 2nd April 2004,democracy got completely derailed leaving the country in a terrible mess. It was also at this election the TNA won 22 seats including 2from the National list. The TNA leaders condoned the conduct of that organization which under threat, intimidation and large  scale impersonation, helped the TNA to sweep the polls depriving the large portion of the voters of their right to vote. Not only the TNA leadership failed to prevent that organization interfering with the polling, the government that was formed at that time also failed in its duty either to expel the fraudulently elected members or to suspend them. The strong request and pressure of theElection  Monitoring teams, both local and foreign, for a re-poll in the North and East was turned down by the Commissioner of Elections. In this situation it is still a mystery  as to why all the democratic organizations, NGOs, political  parties, Human Rights Organizations, Diaspora in particular and such  others, within and out of the country kept silent without uttering one word condemning the TNA for  illegally  sitting  and voting in parliament. The political parties in particular failed to condemn the TNA as a fraudulent  organizations  should share the blame for the present situation. I dare say that if these organizations  jointly condemned the manner as to how the election was held in April 2004,  several thousands  of lives could have been saved.

It is very unfortunate that my repeated protests were neither taken seriously nor recognized by anybody. I needless add that the people were the biggest victims in this destruction process of democracy with no hopes of its revival in the near future. It is high time now for all to get together and save democracy without allowing it to be meddled with by interested parties. If we have contested the 2004 General Elections as desired by the LTTE, Taraki Sivaram and TULF. our desire would have been completely fulfilled and war also would have ended in April 2004. But the Federal Party  without giving the LTTE timely advice only encouraged them for all their doings and now wants the LTTE cadre tried for war crimes. Because of them the war got extended for five years from 2004.

During the 30 years of war apart from other sufferings of the people of all ethnic groups, Human Rights violations caused the worst harm to all people. Most of my suggestions some of which are given below if adhered to several thousand lives could have been saved and suffering by Human Rights violations could have been reduced to the very minimum.

1. In January 2009, when LTTE lost kilinochchi  I pleaded with the TNA either to have the stranded people released or to quit the Parliamentary seats. There was no response from TNA.
2. To my appeal His Excellency responded by summoning a meeting to discuss various matters at which I pointed out that there were still 330,000 stranded, although president disagreed with the figure. TNA was absent from this meeting as well.
3. The TNA failed to attend a meeting convened by Indian Foreign Secretary, I found fault with them for failing to attend that meeting without stopping the war.
4. When the British Parliamentary  team came the TNA warned them about impending disaster after announcement of Indian election results. That means they had pre-knowledge of the disaster.

I strongly urge the international community to intervene genuinely in matters of this nature without favoring  any individual leader.