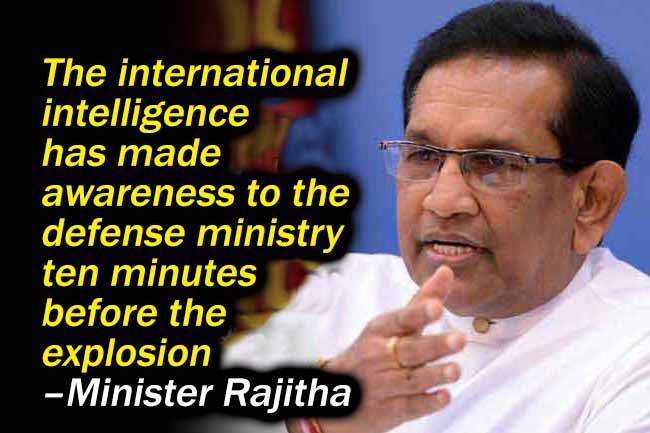 The minister during the press conference said we should search why the defense secretary was irresponsible when the international intelligence has given information about the suicide explosions supposed to happen on the 4th of April.

The health minister further said “The cabinet headed by the prime minister convened today 22nd and all the ministers are gathered here today to raise awareness to the media about the collective decisions taken. First the government would like to render its condolence to the bereaved families. I would like to render the president and the prime ministers condolences. We don’t exclude ourselves from the responsibilities of the disaster. We would start a comprehensive inquiry and investigation into the disaster. In future we would act in a manner that such terror activities would not happen. There are some politicians who are telling that this wouldn’t have happened when they are in power.

I too was a minister of the government of those politicians. There were many bombs in Colombo amid of barricades and army check points. Terrorists need only a fraction of a time. We should identify our irregularities, failures and the discrepancies of the armed forces and continue forward as a responsible government.

The international intelligence agency has raised awareness to our defense ministry on the 4th of April about an attack, that was 17 days before. Later the defense ministry has informed this to the IGP on the 9th of April together with names, telephone numbers and identity card numbers of the members attached to this terror group.

On the 11th of April DIG Priyalal Dissanayake too has informed about his to all VIP security sections. However that information has not been given to presidential security and the prime ministers security divisions. Perhaps the presidential security division was not informed as the president is the minister of defense. From this letter it was confirmed to tighten the security of the VIP’s. However this is an unusual situation. What is important here is, what steps taken to ensure the security of the public?

What is amazing is that the prime minister or the deputy defense minister is not invited to the Security Council meeting headed by the president.

We should see why security measures were not taken when warnings has been given. These explosions are not an act of one terror group but a complex task of an organized crime. Although we have received many clues no action has been taken.

The international intelligence has informed that catholic churches and hotels have been targeted. Before two days and before ten minutes of the explosion the intelligence agencies has informed the defense ministry. This is a tragedy for the tourist industry.

The IGP should immediately render his resignation. We would request the president to remove the IGP and appoint a new IGP during the cabinet meeting supposed to hold today in the evening.