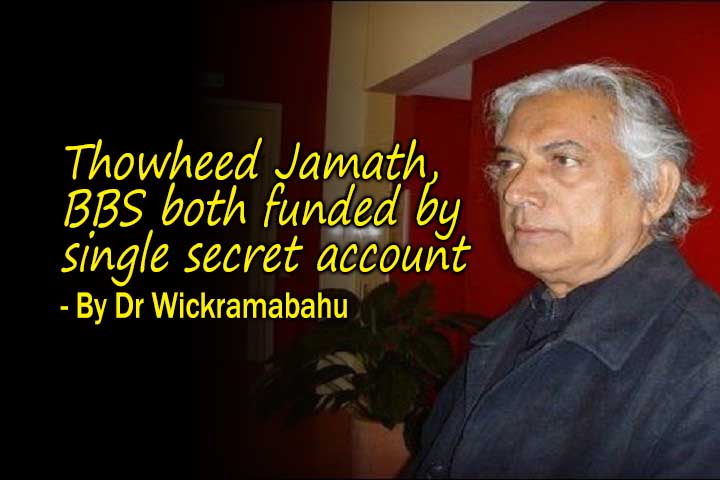 (Lanka-e-News -01.May.2019, 9.00PM) ) Thowheed Jamath, BBS both funded by single secret account’ Featured in a report last week. It further explained that Intelligence authorities have now established that during the Rajapaksa regime, a secret account of the defence ministry had funded Thowheed Jamath, Bodu Bala Sena and other Muslim and Buddhist extremist groups. The ‘Sathhanda’ reported quoting sources at the Presidential Secretariat. There is clear information to prove that Thowheed Jamath’s secretary Abdul Rasik Rafiquedeen was an Army intelligence member. It was him who had given information in 2008 that a group of Mullahs from a foreign country were in a mosque at Maradana. Coordinator was a retired major general- a closest ally of ex-defence secretary Gotabaya Rajapaksa, now a retired major general, had coordinated these Muslim and Sinhala extremists, it has now come to light.

He was also head of the special security operations committee that functioned on Gotabhaya’s instructions during the last presidential elections.

This committee had planned a conspiracy to seize power on January 08, but was foiled. Investigations into the conspiracy made no headway. These leaders misled their followers. The secretary of Thowheed Jamath was arrested on a complaint by BBS secretary Galagodaaththe Gnanasara Thera, but both were in the pay from the same account. The two groups had seriously misled their followers and provoked citizens into racial and religious clashes, the sources said, adding that strong legal action would be taken against both to establish peace and reconciliation in the country.

How to check the spread of extremism..

It is clear that the attacks on Easter Sunday were carried out by local radicals, under the pressure s of foreign fundamentalists. It is also clear that there is little support for this group from the wider Muslim community. While those involved could be swiftly identified and dealt with, the bigger question is how to check the spread of extremism. Some say violent extremism is a cult, not a religion. Then one can argue that all god believing religions are cults, except Buddhism. Hence treating violent extremism as a problem of religion or belief is a mistake. The process of radical, violent mobilization shows closer links to that of a belief in mythical irrational power.  If “radical” beliefs produce terrorists, then why doesn’t every political-Islamist mosque produce terrorists? Even more complicated, why have most of those providing material support to Islamic terrorist groups shown little understanding of theology, but instead seem to be attracted to the thrill of jihad adventurism. Then is it strong attraction to mythical adventure that effect modern young people to extreme actions?

If that is correct, counter strategies based on empowering rational, liberal voices by preaching mercy kindness and tolerance in more “extreme” mosques may not be effective, indeed even counterproductive. When confronted with countering evidence, committed extremist individuals may become defensive and cling on initial beliefs more strongly, driving fence-sitters towards extremism.

It is therefore problematic to assume that countering discussions, showing extremists the error of their ways or debating theology would do anything other than produce hostility and even heightened aggression.

To deal with extremism, the focus should be on weakening the organizational ties within the movement in friendly manner, not on debate. In debate people tend to defend more on emotion and intuition than reason. If people are not working from clear ideological standpoints there is little possibility of making headway through discussion. On the other hand it may make more sense to counter the networks and personal ties between individuals and terrorist groups, using sensitive tactics. In that sense, this relief model maintains that since ideology fails to predict or suppress terrorist violence, other social factors such as alienation, mental health, or bonds with other affected actors explains violence. Of course ideology matters; but extremist ideological pulls exist within a social context. Hence it is the social – class context that counter strategies should be focusing on.

Most recruits to extremists and new religious movements come from those who know one or more members of the group. The personal connection between recruiter and recruited is far more important than the content of the mythology as the testimony of former cult members shows:

“The way the Jesus Army worshiped was a bit odd at first … but I soon got used to it. What really attracted me was the sincerity of the people and the obvious love and bonding that they had with each other”.

Likewise, a participant in another cult reported that: “After his first visit to the ideology center, he thought members of the centre were crazy and decided not to go back. However, he thought about all the people he knew there, and he recalled what a great friendship and warm time he had with them. Subsequently he turned up for the rest of the course.”

Similarly, terror networks operate around bonds of kinship and friendship. One study found that 95% of foreign terrorists who joined ISIS were recruited by friends or family.”

An extremist group is not simply a quixotic fringe group with unorthodox practices: they are a commune of practice. In a sense, it is reemergence of feminist commune of early human existence. For alienated, isolated individuals, these groups create affective bonds of love and attention received from nowhere else. The culture of jihad is more than ideology: a large literature collected has found that terrorist groups have cultures of practice that go far beyond doing terror. Terrorists read poetry, weep and hug, sing, eat, and have a culture that can be observed outside of the material threat they pose. This phenomenon of early commune spirit is the “soft power” of jihad and other extremists, which pulls recruits in not with force, but with social cultural appeal and interrelation ties.

Extremist group thrive on intensive interaction between recruits and elites and forge social interrelation. On the other hand Ex. groups rely on exclusive and isolating bonding practices that forge the conditions necessary for violence. Social inoculates the recruits from outside influence, neutralizes the stigma frequently associated with participation in such groups, and masks their deviant behaviour. Conversely, the more civil connections a group has with others, the more engaged they become in the democratic process. Cohesion and overlapping, bridging ties between communities can prevent splintering, ideological isolation, and foster mutual respect. Thus they become fighters for an imaginary ideal.