Major general on whom Gota took revenge victimized by government of good governance too –is it to deny him army commander post? 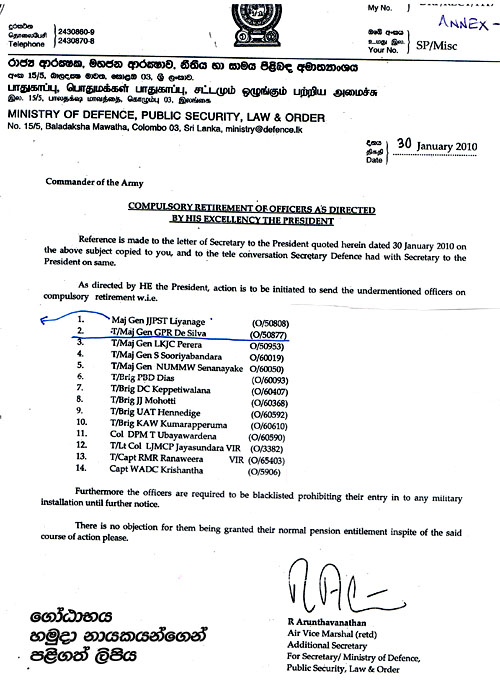 (Lanka-e-News- 16.Feb.2015, 11.30PM) In the past when General Sarath Fonseka who was the army commander ,a witch hunt was  carried out against him after the war was won . With him 14 other high ranking army officers who made a large contribution to the war victory were also subjected to ruthless victimization because Fonseka contested the Presidential election and  the paranoid Rajapakses harbored doubts  against these officers  , whereby they were sent on compulsory leave in order to take revenge on them.

Among those who were victims of the Rajapakse vendetta were 5 major generals , 5  Brigadiers, 2 Colonels and 2 captains. Though they were told that they are eligible for pension , that was not granted to them. On top of that they were not even allowed to get jobs in the private sector. Consequently , being unable to bear the threats and obstacles they had to face , a majority of the 14 officers went  abroad. One of them , Major general Sooriyabandara who went to Australia died there amidst immense pain of mind and suffering. The other officers who went overseas too went through severe  agony and  untold hardships while abroad for the last 5 whole years  , much worse than the difficulties they faced on the battle field.

Now, the secretary to the president of the government of good governance had sent a written letter today (13) to the defense secretary to reinstate 10 of these officers in service . The  action of the President’s secretary   , who is an intimate and integral part of good governance has raised doubts whether he had also taken revenge on one major general of this group of 14 who fell victim to Gatabaya’s  venom and vengeance, because his name that ought to have been included is not in the list sent by the secretary .

4 names have not been included in the list of the Presidential secretary . Major Sooriya Bandara is excluded but that is no issue. Major generals Dhammika Liyanage and Jayanath Perera too are no issue because they have now reached the age of retirement. The issue is regarding major general  P.P. Rajitha  De Silva .

He ought to go on retirement only in September this year. Hence if he is to be relieved of the revengeful action of Gotabaya that victimized him , he should be reinstated , in which case , after the retirement of the present army commander due on the 21 st , on the basis of seniority it is major general Rajitha De Silva who should replace him , and none other .

In the circumstances , it is evident  because of a conspiracy to appoint somebody else ‘s  henchman or stooge ,  Rajitha De Silva who was a victim of Gotabaya’s vengeance and venom is being victimized again by his  government professing and promoting good governance . It is nothing but fair that this conspiracy is aborted , and justice meted out to Rajitha De Silva with a view to putting right the egregious wrong done earlier .Rajitha De Silva was the military secretary during the war. In any other country a military secretary during  a war that is won is honored and recognized as a hero until his death.

It is an incontrovertible fact these are army officers who not only suffered on behalf of the country when it was at war , but also had to face the inequities , atrocities and vengeful actions of the Rajapakses for the last five years . It is therefore the absolute duty of the government of good governance to redress the grievances of these officers

Herein are the copies of the letters :  one letter which reveals how Gotabaya wreaked revenge on the 14 army officers , and the other letter sent by the secretary to the present President  to the  defense secretary reinstating 10 officers ,thereby singling out one officer for victimization .