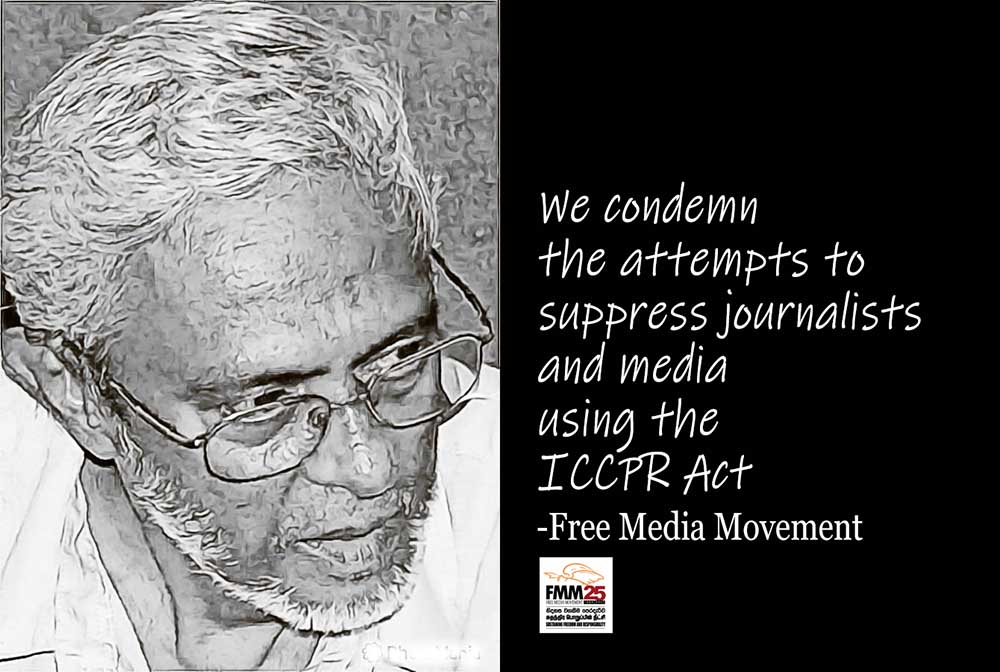 (Lanka-e-News- 16.June.2019, 8.15PM)  The Free Media Movement strongly condemns the attempts to pursue legal action under the provisions of the INTERNATIONAL COVENANT ON CIVIL AND POLITICAL RIGHTS (ICCPR) ACT No 56. of 2007  and urges all responsible stakeholders to draw their attention to avoid using the law unfairly.

Kusal Perera, has been engaged in journalism for a long time in both the Sinhala and English media and has been recognized as a socially responsible professional journalist both locally and internationally. The Organized Crime Division have reported to the Colombo Magistrate Courts regarding action to be taken against him based on the ICCPR Act about the article in the Daily Mirror "From Islamic terrorism to marauding Sinhala Buddhist violence" written by him in his weekly column to the Daily Mirror on 17th May 2019. On Friday the June 14th police officers attempted to record a statement from the editors of the Daily Mirror newspaper that published the article.  The police who were unable to record the statement from the editors of the Daily Mirror newspaper on that day due a technical error have reported that they will rectify the error and come back to record the statement. The Police have stated that they will also proceed to record a statement from Kusal Perera and have obtained his address and contact number.

The Free media Movement points out that this effort by the Police is a serious threat to the freedom of expression and media and the pursuance of legal action under the ICCPR Act which includes provision to disallow bail, based on a complaint of an individual regarding the article published by a veteran journalist in a recognized print media, is a dangerous precedent.

The Free Media Movement urges all relevant stakeholders to intervene in averting this situation and for everyone who respect human rights to come forward to defeat such actions against the Freedom of expression and media freedoms.