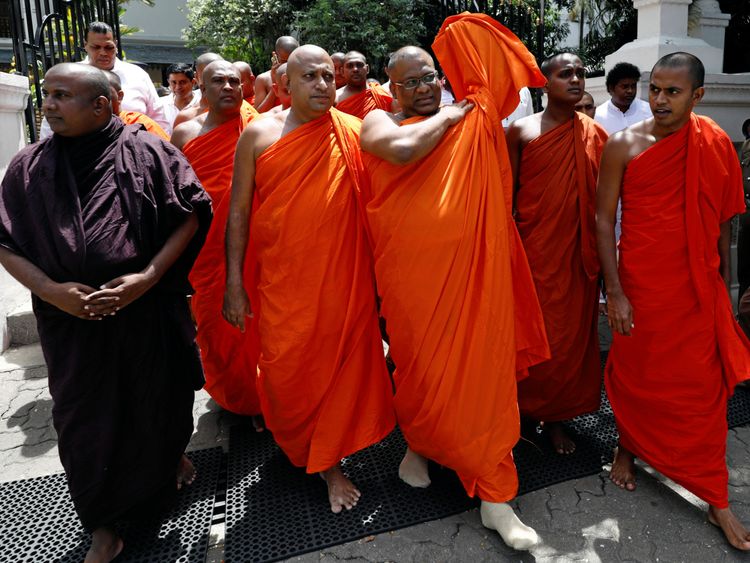 (Lanka-e-News - 15.July.2019, 9.15AM) When nine Sri Lankans blew themselves up in churches and luxury hotels and led to the deaths of more than 250 people, the ugly head of the Sinhala extremist group Bodu Bala Sena (BBS) has roared back into action in inciting violence against the island’s minority Muslim population.

Last week, their leadership, which until recently was under arrest, had called for a nationwide conference to be held in the city of Kandy to be attended by monks from all over the Island.

Despite emergency regulations in force, this meeting was organised by Galagoda Aththe Gnanasara, an extremist Buddhist monk (BBS General Secretary) who was recently released from prison by President Sirisena.

This comes at a time when the anti-Muslim campaign has made the community isolated and ostracised.

Considering the inflammatory nature of the convention, neither the authorities nor the police stepped in to stop this meeting, which had all the ingredients to provoke violence against the hapless minority Muslims.

Gnanasara is a dangerous individual to Sri Lankan harmony and although he claims that he has changed since he was released, the reality is far from that.

At a media conference on July 2, he brought in a married Muslim woman to speak of her harassment by Muslims for marrying a Buddhist.

That claim was dismissed shortly by village elders who refuted her story as a BBS ploy to incite further disharmony and violence against them. She had left her husband and was living illegally with this man.

But that was not all.

Spurred on by government inaction or unwillingness to step in and stop the rising trend of violence directed against the Muslim minority, the Buddhist monks, along with some willing politicians, are blaming Saudi Arabia for what they call "the spread of the kingdom’s ultra-conservative Wahhabi school of Islam" that, according to them, has been the source of extremism and led to the deadly Easter blasts.

They accused the Saudi government of funding mosques and schools in Sri Lanka patterned on Wahhabi Islam, which they claim has led to a rise in militancy among the Muslim population.

They also claimed that a Lankan migrant worker who had come to the kingdom for employment returned home a militant, shaped by the extremist Wahhabism beliefs he was taught in the kingdom.

Besides alleging that Saudi-funded mosques had sprung up everywhere, they also claimed that Sri Lankan Muslim women began switching from the saris to the ‘all-enveloping black abayas’ as a result of Saudi conditioning.

This is a preposterous charge on several counts. Contrary to the prevailing notion among many in the foreign press, there is no such thing as ‘Wahhabi’ Islam.

Sunni Islam has just four schools of law or madhabs: Hanafi, Shaf’ie, Malki and Hanbali. Each has its own religious guidance, which falls within the framework of the Islamic faith.

The level of tolerance and leniency varies moderately between each school. In Saudi Arabia, people are free to practice and follow whichever school of thought they so desire, and I dare anyone to prove otherwise.

Saudi response to the latest charge was swift. In a letter released to the Sri Lankan press, the Saudi Embassy in Colombo detailed a list of financial contributions the kingdom had made to Sri Lanka.

Of the more than $400 million that the kingdom had spent, more than $220 was directed towards improving the roads, water and electrical infrastructure of the island.

More than $130 million was directed towards improving facilities at medical universities and institutions. The remainder was allocated for other public works. Not a single dollar was sourced to funding any form of extremist behaviour.

An astute Saudi said: ‘Almost half a billion dollars with almost no strategic benefit for the Saudi or the Muslim community.

If a western country had donated just half a million dollars, they would have got 100 times more favourable publicity and got the Sri Lankan government to bend backward to accommodate their policies.’

The accusations of BBS and their political lackeys are just a part of a grander design to facilitate the impending ethnic violence.

In spite of being plagued by a 30-year civil war with the island’s Tamil population, it seems that Sri Lankan politicians chose not to be aware of the warning signals of yet another long and prolonged wave of ethnic unrest, this time against the Muslims, which will certainly bring the island down to its knees.

By Tariq A. Al Maeena

(He is a Saudi socio-political commentator. He lives in Jeddah, Saudi Arabia.)
Courtesy to Gulf News