UNP chaos is over.! Sajith given candidacy.! Sajith agrees to all conditions.!! Unanimous official statement tomorrow.!! 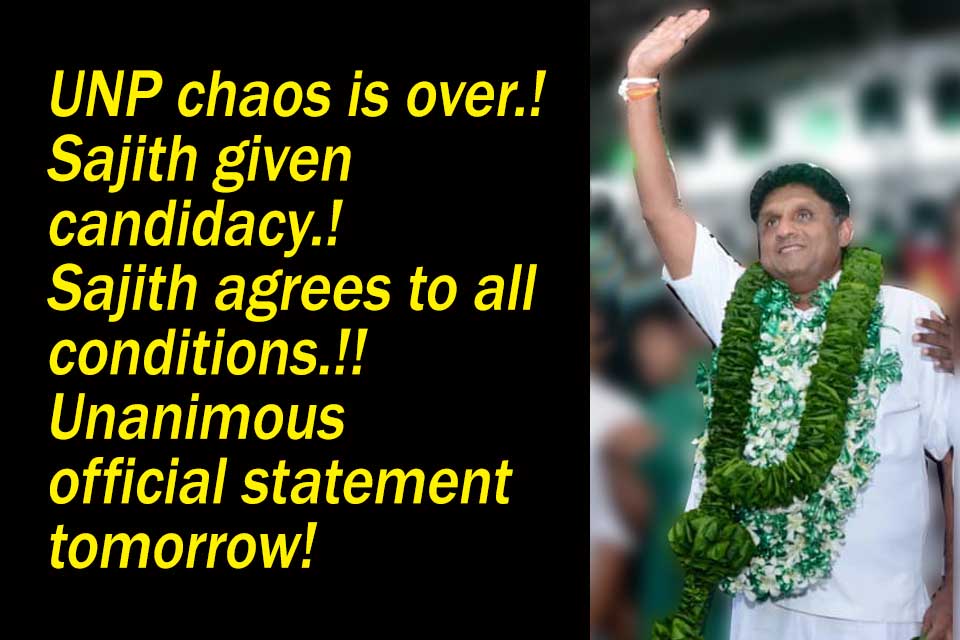 (Lanka-e-News- 25.Sep.2019, 2.20PM)  The seniors of the UNP have decided to nominate Sajith Premadasa as the presidential candidate for the United National Alliance if the latter is complying to party’s conditions. Sajith Premadasa too has agreed to those conditions.

Following are those conditions

1.      Sajith Premadasa must agree and adopt to the UNP policies and programs and not to arbitrary policies. His presidential candidacy policy is formulated by the proposed United National Front.

2.      Although he becomes the presidential candidate or the president he should not change the positions of the members of the party which has been passed by the party conferences.

If Sajith Premadasa agrees to these basic conditions, he will be unanimously nominated for the Presidency at the party's working Committee meeting to be held tomorrow (26).

Since the UNP was in danger of splitting due to the sectarian agenda of Sajith Premadasa and due to the generous intervention of Karu Jayasuriy all stakeholders has worked to reach a consensus of all 'win-win' solutions. Karu Jayasuriya has always said he would not interfere in a struggle which would split the party.

The first condition of the above, that the candidate should agree to the policies adopted by the UNP means is to abolish the Executive Presidency which the party has already adopted and bring a new constitution which devolves power. At a recent press conference, Sajith Premadasa made contrary statements regarding this. If Sajith adheres to his private policies UNP cannot obtain the support of the TNA. If so the UNP cannot win by the votes of the south alone. The first condition is definitely an advantage to the victory of Sajith premadasa but not a disadvantage.

The second condition is that even he becomes the president he should not change the party positions, which means that even the UNP president will not get the party leadership. It is also reasonable that if Sajith wins the presidential election it will be healthier for him to be an independent person as it is not won by a single party.

The best example of this is the failure of Maithripala Sirisena. Following the victory the latter by taking over the leadership of the SLFP he caused immense damage to the SLFP and to the country by conflict of interest. The second condition is beneficial to both Sajith Premadasa and the country as the UNP and the country do not want such harm in the future.

On the other hand, one of the main reasons for the emergence of an executive presidency is that the person who is elected becoming a party leader. Realizing this, Gotabhaya Rajapakse, who has been nominated as the presidential candidate this year, was not given the leadership of the Pohottuwa. Its leader is Mahinda Rajapaksa. Similarly, the second condition of the UNP seniors is more positive.

It does not take long to fulfill the third condition, the incumbent prime minister, to remain so. This is because the candidate who wins the presidential election will surely have the constitutional power to dissolve the parliament and then go for a parliamentary election. That time will come in February 2020. The new Prime Minister of a government formed will be the person who gains the most confidence in the Parliament. However, Sajith Premadasa has agreed to these conditions in the presence of all senior UNP members. He has said he wants only the presidential candidacy.

Lanka e-News wants to add something new to those conditions. That is Sajith Premadasa should be allowed to lead the next presidential campaign on his own consent.

From today the crisis created by Sajith Premadasa and his gang is coming to an end. However he should take steps to wipe out the discouragement formed within the UNP alliance due to this crisis. Otherwise, Sajith Premadasa will be defeated and he will be responsible for the defeat and that would the end of his political life not only for him but for his faction.

We wish good luck for Sajith Premadasa and the alliance to save the country by Gotabhaya tyranny of a dictatorial military government ..!