The 'traitors' questions what did Gota do for the country. Following is the list what Gota did 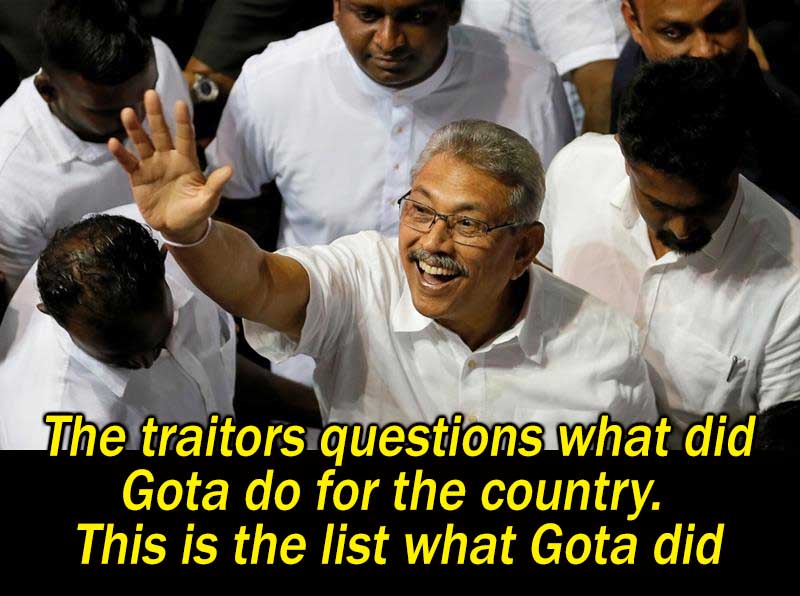 2.      Sending a SL airline to Switzerland to bring a puppy dog to his wife

3.      Killing the two chopper pilots who brought the gold captured by Sarath Fonseka of LTTE through a helicopter crash

4.      Killing of parliament MP Sripathi Suryarachchi through a fatal accident who proved with evidence that Rajapaksa gave extortion to LTTE

5.      Raising sharks at home and feeding them with white van victims who are abducted

7.      Killing the beggars by hitting their heads with stones and decorating the towns.

8.      Forcibly dumping the Colombo garbage to Meethotamulla area which destructed many lives and properties.

9.      Forcibly removing poor households from Colombo by deploying the army. Kidnapping the people through white van who are protesting.

11.     Setting fire to Lanka e News office and its library

12.     Setting fire to Colombo Kachcheri to destroy documents belong to people have valuable properties in Colombo who has gone overseas.

13.     Spending 90miliion public money to renovate his parent’s grave. Following a court verdict a part payment was made leaving the arrears
unpaid.

14.     Selling the army headquarters land located at Galle face for hotel Shangrila and taking a 40 million commission through the deal

17.     Leaving to US during the intense war with LTTE claiming false psychiatric disorder

18.     Taking the American citizenship claiming as a Sri Lankan patriotic

19.     Making arbitrary agreement with the US government without informing the SL parliament

20.     Threatening monks alleging bombing Buddhist monasteries when the Mahanayakas came out to protest the imprisonment of General Fonseka.

21.     Acquisition and misusing of valuable lands belong to the urban development ministry.

22.     Threatening the senior police DIG’s who are enforcing the law during a protest opposite the UN headquarters lead by Weerawansa

23.     Misusung US $ 8million for the Mig aircraft deal claiming to be paid to a company named Belimmsa which was not existed in London

24.     Protecting the Interpol red warranted Udayanga Weerathunga who is the main accused for the mig aircraft corruption.

25.     Mysterious death of Noel Ranaweera who knew the secrets of the Mig aircraft deal. Not allowing to keep a postmortem of his corpse when the body was brought to SL.

26.     Acquiring large scale commission from all Chinese projects in the country.

27.     Acquire commissions from all purchases by taking the exclusive right to import weapons during wartime.

31.     Killing dissenters under the guise of showing weapons.

33.     Abduction and killing of Ragama Sudu Seeya and Danduwam Mudalali of Tangalle

35.     Killing of parliament MP Joseph Pararajasingham during the eve of Christmas

38.     Trying to steal the sword supposedly belong to prince Sapumal and killing two chief monks of the Kotte temple.

39.     Killing by calling names of the witness of the above temple together with 27 inmates of the Welikaada prison.

41.     Killing of rugby player Wasim Thajudeen who exposed a birth mark of the lover of one of Rajapaksa son.

42.     Displacing documents belong to the fake company of the Mig aircraft deal

44.     Shooting and killing fisherman Anthony of Chilaw who protested to reduce the oil price.

45.     Forming paramilitary forces with EPDP and EPRLF and kidnapping of children demanding extortions. Killing the children following the extortions.

46.     Forming a paramilitary force with underworld gangsters and abducting people who are against.

47.     Creating paramilitary forces with members of renegade LTTE and misusing them for personal revenge

48.     Shooting of Katunayake free trade zone worker Roshane Chanaka who protested against the arbitrary plundering of the provident fund on the pretext of pension. While taking the funeral Imposing restrictions to the catholic church and deploying troops to the funeral

49.     Attempting to abduct “wanathe Sunil Ayya” for showing his resentment directly to Gotas face for the dumping of the meethotamulla garbage. He was released by the abductors due to the fear of peoples protest

50.     Abducting the chairman of the Kollonnawa urban council Ravindra Udayashantha by the white van. The abduction was foiled due to the intervention of the people of the area. The abductors were apprehended by the area people later they were released by Gota pressurizing the police.

51.     Taking the ancient bell owned to the Sri Pada claiming for repairs but later it was disappeared.

53.     Kidnapping of wealthy Tamil and Muslim businessmen’s and demanding ransoms

56.     Aggressively controlling the journalists and threatening them to stop drawing cartoons.

57.     Threatening journalist Fredika Jansz and yelling at her in raw filth.

59.     Throwing bomb to the executive director of Transparency International and presidents counsel lawyer J.C. Weliamuna who exposed the corruptions of Rajapaksas.

60.     Deploying the troops and chasing the people living in Slave Island and selling those lands to foreign companies.

64.     Paying monthly wages to members of Thawheed jamath including Zaharan and 26 others

67.     Surpassing brother Basil Rajapaksa and building palaces without an owner in Kataragama

68.     Hiding his dual citizenship and obtaining an illegal passport

69.     Allowing his wife and children to the US and removing his US citizenship