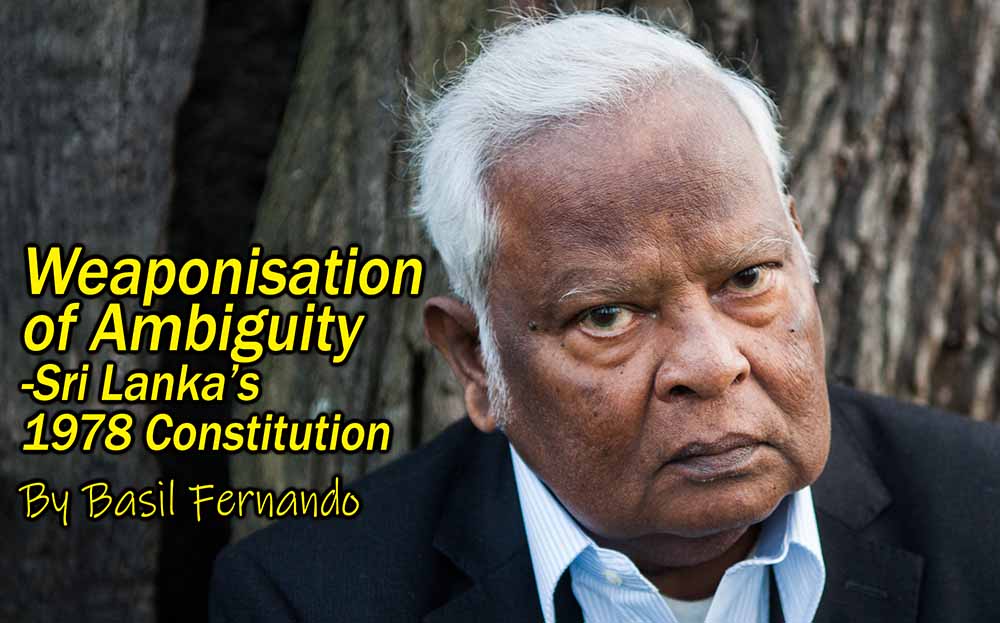 In Singapore, the former Prime Minister Lee Kwan Yew virtually rejected liberal democratic norms and standards and did so quite openly. His was a very clear stand that the Singapore he envisaged was not a liberal democracy.

However, in Sri Lanka, we had a long tradition of constitutional law and legal interpretation based on the British common law principles that had been introduced to Sri Lanka. These liberal democratic norms and standards were the fundamental basis on which the constitution had been based.

The Soulbury Constitution of Sri Lanka, in place after Sri Lanka’s independence, contained the fundamentals that were established was in terms of the British constitutional law tradition.

Other former British colonies, including India, adopted constitutions which are similar in structure as that of the Soulbury constitution. In India, several famous judgments of the Supreme Court established the ‘basic structure’ doctrine. What it meant was that the Indian constitution had a basic structure that should not be altered.

Some of the basic principles on which this structure is based is as follows:

These were also the fundamental principles on which the Soulbury Constitution was based. Thus, on those issues, there were no ambiguity.

However, the very notion of the republic was altered in the 1978 constitution. The name ‘republic’ was retained but the powers given to the president to be above the law and to be the power above all powers was in fact a reintroduction of monarchic ideas under a different guise. It was therefore not a surprise that on several occasions thereafter there were presidents who tried to more openly adopt monarchic powers.

Modern constitutionalism in any liberal democracy is the result of the struggle against absolute power against the monarchy. Prof A J Wilson represented the point of view of a section of the population that that believed that their rights as minorities could not be achieved within a democratic system of governance, as such a system of governance will all ways depend on the majority approval of its decisions. They believed that a dictator who can ignore the majority point of view would better serve their ends. This was a fundamental illusion because a dictator that denies the rights of a majority could not be expected to protect the democratic rights of a minority. The very notions of dictatorship and democratic rights are in opposition to each other. Professor A J Wilson learned this lesson much later and expressed it in different ways after he left Sri Lanka, distancing himself from his collaboration with President J R Jayawardena. When the 1983 riots happened, the only offer President J R Jayawardena could grant to Prof A J Wilson was safe passage out of Sri Lanka.

In terms of the parliament, the creation of such extensive presidential power created ambiguity in the law-making process. With resignation letters obtained from its party members, the majority in the parliament surrendered the power of making laws as the President wished. The presidents who came later did not have a majority won directly through elections. They had to develop various practices, including corruption, in order to have the required majorities by recruiting persons elected to parliament from other parties to join with them. The constitutional provisions for passing laws also changed in the president’s favor by prescribing a very short period for review by the Supreme Court. The extent to which this interfered with the system was demonstrated by the President sending a piece of paper as a law passed in parliament when in fact the parliament had passed a law that was the very opposite of what the President claimed.

The interference into judiciary was blatantly manifest in the careers of Sarath Nanda Silva as the Chief Justice and also Mohan Peiris, who was treated as Chief Justice but whose appointment has now been voided. According to the current president, Mr Mohan Peiris promised to do anything the president wanted if he were to be kept in the position as Chief Justice. That is the extent to which the judiciary was subjected to subservience by the executive president, who had acquired powers to that very close of a monarch.

To understand the damage done by the 1978 constitution to the legal system and legal interpretation within Sri Lanka it is essential to understand how the weaponisation of ambiguity was used so shrewdly to defeat the very fundamentals of liberal democracy in Sri Lanka.

(A press release from the Asian Human Rights Commission)