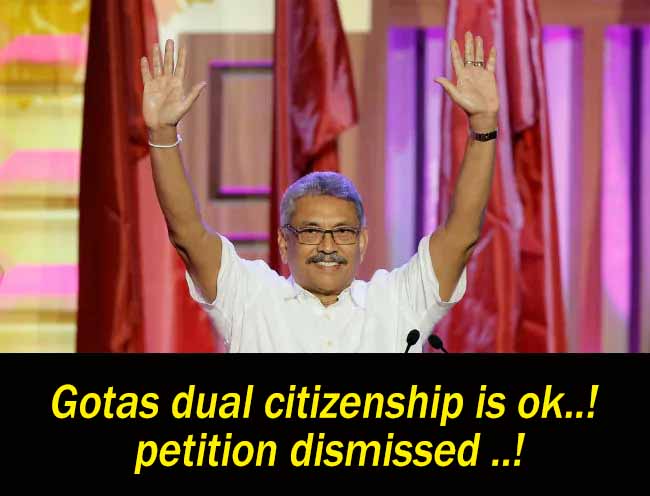 (Lanka-e-News -04.Oct.2019 -8.20PM) The court of appeal dismissed the petition filed by the Civil Society Collective stating that Gotabhaya Rajapakse had obtained his dual citizenship in 2005 in a systematic manner and was still an American citizen.

The judges did not say in open court why the petition was dismissed. They said there was no time and it would be announced another day. According to Lanka-e-News, the reason the petition was rejected as there was no cabinet for two days when president Rajapaksa took over as president in 2005 but argument raised since president Mahinda had executive powers to sign Gota’s dual citizenship before the present 19th amendment.

Gota's dual citizenship certificate was signed by an authorized official on behalf of the president. It is said that the petition was dismissed on the grounds that there is an issue regarding the powers vested to the president and that this judiciary has no jurisdiction to hear it.

Although this is a question of Gota's dual citizenship, the question remains as to whether he properly withdrew his US citizenship. A dual citizen cannot contest the Presidential election in Sri Lanka.