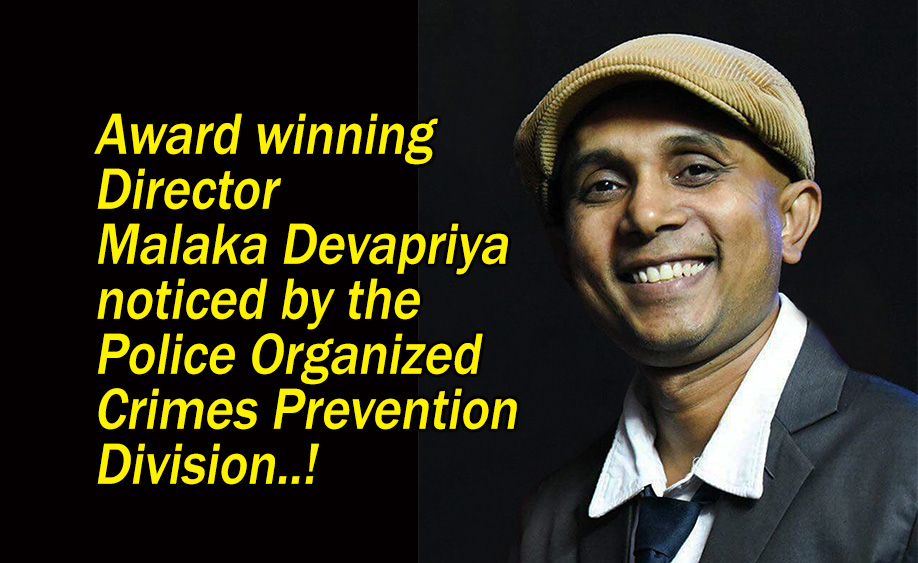 (Lanka-e-News -17.Oct.2019, 4.15PM) Malaka Devapriya, the award-wining dramatist, radio playwright, film producer and director has been noticed by the Organized Crimes Prevention Division(OCPD) of Sri Lanka Police to be present there today (17 October) morning to give a statement in respect of his radio dramas aired via the national radio station last year.

This is a revival of criminal proceedings by the OCPD against his radio dramas titled "Kanata Parak" (Earful of Visuals), exactly after one year. The Buddhist extremist, Agulugalle Siri Jinananda, the monk who heads the infamous Buddhist Information Center had complained to the OCPD against his radio dramas alleging that the titles of the dramas are "distorted" words of the "Buddhist terminology" and defamed the same. The police has instituted action at the Colombo Magistrate Court (Case no. B98930/01/08) against the dramas under draconian laws- under Sections 291A and Section 291B of the Penal Code and under Section 3(1)of the International Covenant on Civil and Political Rights Act (ICCPR Act)No.56 of 2007.

The same monk had early this year complained to the Criminal Investigation Department (CID) against another award-winning writer and poet Shakthika Sathkumara alleging that a short story titled "Ardha" (Half) written and posted by Sathkumara in his facebook account insults Buddhism and Buddha and distorts the character of his lay life. He was then arrested and produced before the Magistrate Court of Polgahawela under Section 291B of the Penal Code and under Section 3(1) of the ICCPR Act. He was kept in remand for more than 120 days till he was released on bail by the High Court. The danger of same fate falling upon Devapriya is high.

Once a person is produced before the Magistrate Court under ICCPR Act, only the High Court can grant bail under special circumstances, after a long delay and arduous procedure. If convicted under this provision, the artists can face upto 10 years imprisonment.

Devapriya had filed a human rights case in the Supreme Court of Sri Lanka claiming imminent infringement of his fundamental rights guaranteed under the Constitution of the country and is coming up for support on the 30 of this month(30 October). He has named the Inspector of Police of OCPD, Inspector General of Police(IGP) and the Attorney General as Respondents. This notice from the Police has come while the said FR matter is only days away.

All governments heed to the demands of Buddhist extremists, as the Buddhist establishment has always been used to divide the working class on racial lines to suppress class struggles.

This is totally anti-democratic and is a continuation of the witch-hunt against artists and journalists in the country.

All forces who defend democratic rights should raise their voices against these measures by the ruling elite and the government and demand unconditional and immediate cessation of all criminal proceedings against Devapriya, the other the artists and their art works.