Gotabaya who said he would abolish the 19th amendment, ends the current parliament from midnight today !! 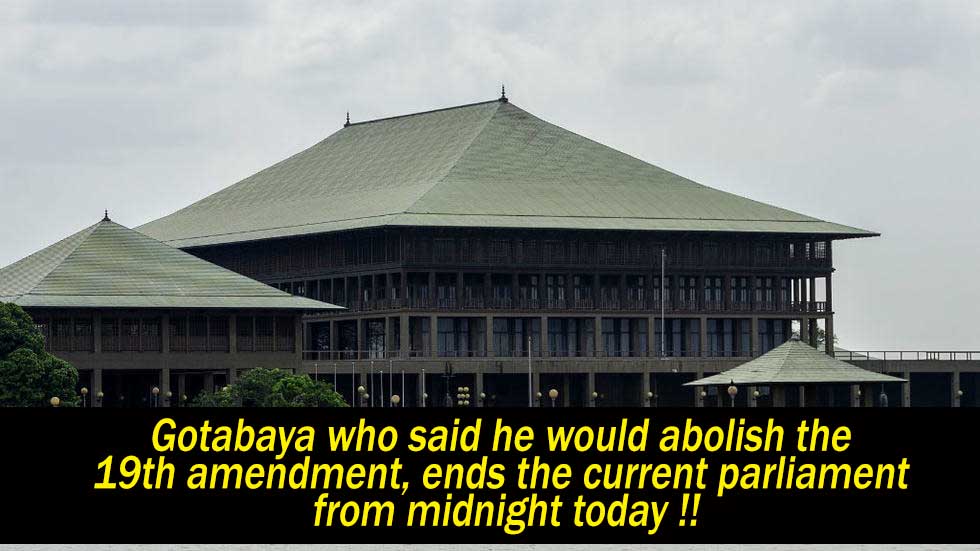 (Lanka-e-News -02.Dec.2019, 11.30PM) President Gotabhaya Rajapaksa has terminated the current term of parliament after midnight today, according to the powers vested to him by Article 70 of the Constitution. The new term of Parliament will be ceremonially opened at 10.00 am on the 3rd of January next year. A special gazette notification would be issued tonight.

Parliament terminates after new President sworn in, selecting a new prime minister and the appointment of the new cabinet. However a new leader of the house, chief government whip and no opposition leader have been appointed. With the end of the parliament 20 active committees including the COPE committee would be abolished and all proposals which was included in the order book would also be abolished. The new parliament should appoint the new committees.

Since Prime Minister Mahinda's new government will not have much power would continue to operate the parliament without much activity until the president has the power to dissolve it.

During president Gotabayas visit to India, he said that if he gets two third majorities in the coming parliament election he would abolish the 19th amendment. The 19th amendment was legislated aiming to remove president’s arbitrary executive powers and to render it to the prime minister led parliament and to the independent commissions which would not create anarchy in a country. It is clear that Gotabaya wants to increase his executive powers necessary to create a dictatorship but not to strengthen the 19th and sustain democracy. Nevertheless, it is unrealistic to assume that Prime Minister Mahinda Rajapaksa would confer his powers vested to him from the 19th amendment to Gotabaya as a legacy of Sirisangabo.