The defiance of the Rajapaksa which terrorized the Swiss embassy, making the victim a criminal and plundering the country to an international crisis 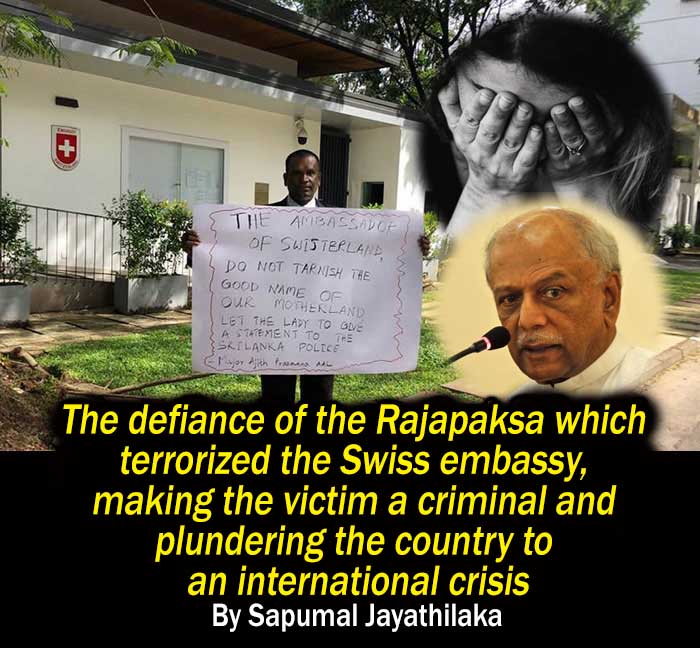 (Lanka-e-News -06.Dec.2019, 12.30PM) Looming signs of the Rajapaksa administration have already begun to show. While starting from the demise of the former premier, leading to an international diplomatic crisis, landslides, and floods has finally ended up with the death of Ranjith Soysa. President’s visit to India and premier Modi’s advice for the devolution of power has reversed back. The worse crisis is the white van culture coming to light. When Rajitha and Poddala Jayantha raised their voices against the white van, it became a joke but today the same white van has become a boomerang to them. This is a crisis created by them not created by us.

This limelight is not an ordinary one but a limelight inciting the international. As long as an employee working in an embassy, whether in Sri Lanka or abroad, is subjected to diplomatic immunity for the work of that embassy. It is a recognition that has existed since ancient times, not today. If any person or government has a problem, necessary to conduct an inquiry can be started following into the Vienna Convention through the Ministry of Foreign Affairs of that country. No one has a question about it.

Except for the hostage situation in Iran, no state currently works above the Vienna Convention. But now in Sri Lanka there are institutions and individuals who step over it.

The abductors has forcibly stripped her underwear and sexually abused her..

The abduction of the Swiss embassy staff, whether local or foreign origin, abducting her, sexually abusing her, stripping her, threatening her with a pistol inside her mouth and interrogating her illegally in terms of jurisdiction over his/her official duties is a serious breach of diplomatic privileges.

The woman, who was abducted, was forced to remove her undergarments when she was refused to answer. The abductors has sexually abused her and removed her undergarments while she was questioned. Further they have taken her phone and copied the data. Following the abuse for three hours she was threatened to kill by putting a pistol inside her mouth, if exposed the incident. The victim shocked by the chain of events, is in the embassy, but scared to speak. She is still undergoing psychiatric treatment. It is in this context that the embassy requests her to be taken to Switzerland for further treatment.

Tribalism that made the victim a criminal..

However, Gotabhaya's government does not allow her to leave the country and has obtained a court order preventing her leaving the country, making the victim a criminal. It is amazing that it is a woman judge who has issued a court order. No country in the world prevents a victim to leave. It is sad that the judge is unaware that there is a law protecting the victims of a country. The President of the Victims Protection Bureau is Suhada Gamlath who is also a humble Rajapaksa associate. People who voice in support of this should think about what they would do if their sister or wife encounters such an incident.

Such actions would be detestable to the civilized world, and it would cause the whole world to decide against our country that barbaric tribes were more civilized than us. Most people are unaware that this is done by political criminals and misunderstand our country and the people. We will have to see in future how serious it is.

Kamal Gunaratne, the current Secretary of Defense, should be reminded of the authorities who used the diplomatic immunity to flee the country committing a murder when he was under the jurisdiction of the Embassy in Brazil. But isn't it ridiculous to make legal arguments to prevent the embassy worker from leaving the country, though she has done nothing wrong.

Although the Ministry of external affairs had the correct policy at first, but then, due to political pressure, the old decade of vandalism has gone into play. The Ministry of External Affairs has been transformed into the Criminal Investigation Department. How ridiculous is the statement made by Dinesh Gunawardena that the victim had not made a complaint, that the case was being interrupted? According to him, they have more urgency to finish the investigation than to find the truth.

Foreign embassies has only two options..

It is no secret to the embassy how the newly recruited CID personnel have acted in this incident. It is learned that the diplomatic units are in a state of panic. There is no opposition today. Former foreign ministers also do not speak. They are in a separate struggle. There is no opposition leader. There is no use of Sajith. He has no international recognition. The diplomatic sector has only two options. One is to take care of their own safety, or to look the other way and say, "Do whatever you want." It is tragic that the people are splendid and dumbfounded by the glory of the past, drawing paintings where the country is slowly sinking in darkness. We are getting cornered in the world. There will be serious consequences we have to face in the near future.

Let us stand for the rights and protection of the embassy staff We also have the right to advocate for the safety and rights of the officers of the Swiss Embassy. They have come to our country. Neither Hitler nor Mussolini had ever touched Switzerland in World War II. Today, the Swiss state does not need anyone's help. They are friendly nation who look for the welfare of others. It is not small mistake that we have made to such a country. The entire state should apologize for that. They were there for us. They have nothing to take from us. But there is much we can take from them.

The EU is quietly watching at all these. We will be held accountable when the GSP plus is given to us at the Human Rights Commission. As a nation and as a country we have to continue to deal with the international community even if these politicians leave tomorrow. In the days of Mahinda Rajapakse, the government sent Karuna Amman's to Britain through a fake passport and until today, the British visa office has been removed from Sri Lanka and taken to India. Despite the arrival of good governance, the office was not re-established in Sri Lanka. We should take examples from the world. The state of Zimbabwe has not been able to resurrect today because of what Robert Mugabe has said and done. It is the people of the country who have to pay for the mistakes of the rulers.