Why the MCC agreement should be opposed..! - Alliance for Economic Democracy 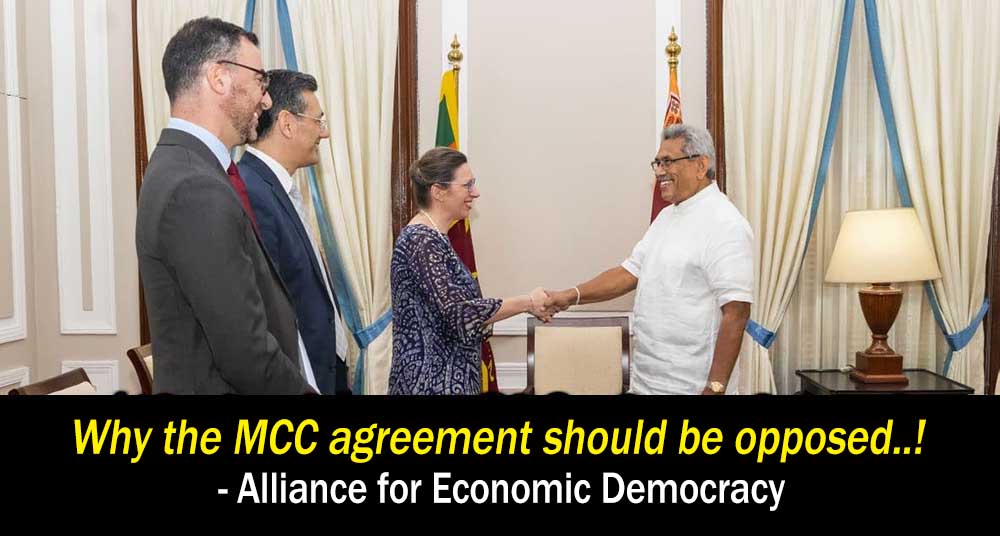 (Lanka-e-News -09.Dec.2019, 9.30PM) The Alliance for Economic Democracy (AED) is a concerned group of trade unionists, farmers, fishers, students, academics and activists who uphold the value of economic rights and justice in public policymaking. We wish to draw your attention to several key issues regarding the proposed Millennium Challenge Corporation Compact (MCC), which are not adequately represented in public discussion at this time, yet crucial to the wellbeing and security of people in Sri Lanka.

The MCC’s economic growth constraints analysis identifies existing legal limits on plot size and land consolidation as impediments to commercial agriculture and proposes to liberalise the land market and enable acquisition of land by foreign entities. Some of these proposals are in line with land reforms pushed by the World Bank and other development aid programmes since the mid-1990s. They ignore the importance of small-scale agriculture despite obvious failure of large-scale, export-oriented, corporate agri-business across the world. The people of Sri Lanka have challenged attempts to displace small agricultural producers in the past. National statistics indicate that 27% of the island’s labour force is employed in agriculture and fisheries, while over 80% of land is state-owned. Indebted rural communities (many of them small producers) would be forced to use land granted to them as collateral to pay off their loans, leading to land grabs by creditors, the transfer of prime land to multinational corporations, the loss of livelihoods for local farmers. Conversion of leasehold to freehold could render many landless and force people into the informal sector as day labour. Moreover, export-oriented commercial agriculture often entails excessive use of agro-chemicals and mono-cultivation which harms biodiversity, food security, and the health and well-being of cultivators - many of whom already suffer from chronic kidney disease (CKD).

The MCC contract annexes on the transport sector propose a heavy surveillance regime with extensive CCTV monitoring equipment, facial recognition software, geographical mapping and more. Such surveillance mechanisms impinge on the privacy of Sri Lankan citizens. Furthermore, the involvement of a foreign state in recommending and implementing this surveillance regime is cause for concern. Strategically sensitive geographical information should be under the supervision of the Ministry of Defence and the Survey Department and not under private or foreign firms.  Furthermore, certain GIS information should not be available to the private sector due to security reasons. Therefore, before even discussing such broad surveillance and data gathering, the Sri Lanka government should formulate a National Data Protection Strategy and Plan as a priority.

MCC's constraints analysis for Sri Lanka was drafted in the US without engaging national universities, academics and the interests of local people. The report misidentifies the island's binding constraints to growth. Sri Lankan experts consider rent-seeking and corruption by politicians and related business networks to be the primary binding constraint to economic growth, FDI and poverty reduction, rather than land policy or transport issues. It is remarkable that MCC has overlooked ‘corruption’ as a binding constraint to growth and poverty reduction, in the context of its stated commitment to “good governance”. Hence, if MCC wishes to support Sri Lanka it would be best that it contributed the US$ 480 million to pay down some of the island's debt owed to international banks and US-EU sovereign bond traders. This would free up the country’s fiscal space to invest in development according to nationally set priorities and agendas. In Sri Lanka, poverty is highest among the agricultural and fisheries communities. Lifting these people out of poverty requires a development program to empower the local fishers and farmers. However, US and EU “donors” have consistently neglected to assist Sri Lanka to tap into its extensive maritime resources. Instead, Sri Lanka’s exclusive maritime economic zone, which is almost ten times its land area, is over-fished and exploited by Distant Water Fishing States (DWFS), that claim to be aiding poverty alleviation with trade concessions.

Apart from direct consequences on land and transport related sectors, MCC will also lead to,

Sri Lanka (both on land and sea), is rich in valuable Rare Earth Elements (REE), which combined with its geo-strategic location in the Indian Ocean on major trade and Undersea Data Cable (UDC) routes, presents a ‘paradox of plenty’ or ‘resource curse’. Ironically, since war ended in 2009, the country has been vulnerable to dubious foreign development “aid” projects that merely advance the strategic business and security interests of ‘donor’ countries and generate a debt-trap. The districts demarcated for freehold privatisation under the MCC compact are rich in pure veins of Graphite for Lithium and Rare Earth Minerals (REM). These valuable resources are critical inputs in the manufacture of electronic hardware such as robots, electric cars, mobile phone screens and batteries. However, contracts for the mining and processing of graphite are being leased to multinational companies at undervalued rates. Sometimes the state gets only 5% of the income. The island’s natural resources belong to the people; and their harvesting, mining and processing should directly benefit citizens. It is therefore imperative that an institutional framework and national policy on REE be developed. National resources should remain publicly owned and their mining and processing should only possible by publicly accountable state-owned enterprises. The government must ensure that export of these minerals should only be in processed, value-added form to ensure maximum benefit to the people.

The MCC constraints analysis identifies Sri Lanka’s relatively progressive labour law as a problem for foreign investment and development. Proposals to open land for commercial use and land-based private investments also impact workers. It is clear that structural adjustments and liberalization of labour law demanded by MCC are far-ranging and not restricted to land and transport alone. In this context, it is necessary to strengthen labour laws and formulate policies to ensure decent jobs with living wages to improve the living standards of working people. We wish to remind that the USAID is already forcing the government to reform labour laws under the project ‘Supporting Accelerated Investment in Sri Lanka (SAIL)’ designated to promote investments in Sri Lanka.

The renewed push on the MCC Compact came after the Easter Sunday attacks against the economy and people of Sri Lanka. It also corresponds with the US’ search for a new foothold in the Indian Ocean, just when the UK-US military occupation of Chagos Islands is challenged by the Chagossian people. In the context, MCC should be read and evaluated together with the Acquisition Cross-Servicing Agreement (ACSA) and the proposed Status of Forces Agreement (SOFA). It is noteworthy that the MCC itself was created as an extension of the Development-Security nexus at the backdrop of US war on terror in 2004. In addition, the US government has increasingly talked about its need to balance China in the Indian Ocean and referred to the presence of China in Sri Lanka.  MCC, SOFA and ACSA all are in line with the US’ Pivot to Asia policy and trade war against China, Iran and the rise of Asia. As of now MCC activities have significantly eroded local and provincial governance, as well as, democratic and national oversight institutions, as in the case of the State Lands (Special Provisions) Bill and the Development (Special Provisions) Bill. Not implementing articles, withdrawing from and or terminating the MCC Compact would be costly to the people of Sri Lanka at it is governed by International Law; far more than the US$ 480 as GoSL mysteriously rushed to sign the Singapore Mediation Convention in August 2019. Signing MCC will ensnare Sri Lanka in a costly geo-political conflict between the US and China and endanger our sovereignty. We, as citizens of a formerly colonised country, highlight the importance of decolonisation and demilitarisation of the Indian Ocean.

4. Experiences of other countries with MCC:

MCC, since its initiation in 2004, has signed 37 compacts. In Madagascar, MCC funded land reforms resulted in 1.3 million hectares, or half of Madagascar’s arable land, being leased free of charge to a foreign private company for 99 years for export agriculture. In Ghana, MCC grants to the energy sector resulted in reforms that privatised one of the largest state-owned electricity providers. In Honduras, MCC funding continued months after an illegal right-wing coup, providing funding and legitimacy to an undemocratic regime. As there is overwhelming evidence of the negative consequences of MCC experiments in other countries, we recommend that Sri Lanka avoids making the same mistakes.

Finally, we affirm our strong opposition to the proposed MCC Compact as it is clearly inimical to the economic sovereignty of all Sri Lankans. Simultaneously, it is clear that claims that the MCC compact would "divide the country" are politically engineered to promote communalism and distract from the real dangers that the MCC project poses to the rights and assets of the people of Sri Lanka. Contrary to its proposed objectives, implementation of the MCC program would result in exacerbating poverty and inequality by dispossessing the poor. Projects for poverty alleviation through growth should invest in education and healthcare and focus on creating decent jobs with living wages. Ensuring people’s rights to land, water and clean air should not be conferred to the market. Industrial development must be environmentally sustainable and promote small producers in agriculture and fisheries.

The Government of Sri Lanka should not sign the MCC Compact.