Sri Lanka is the first country in the world where a sexually harassed victim of a diplomatic privilege has made an accused when she complained her predicament..! 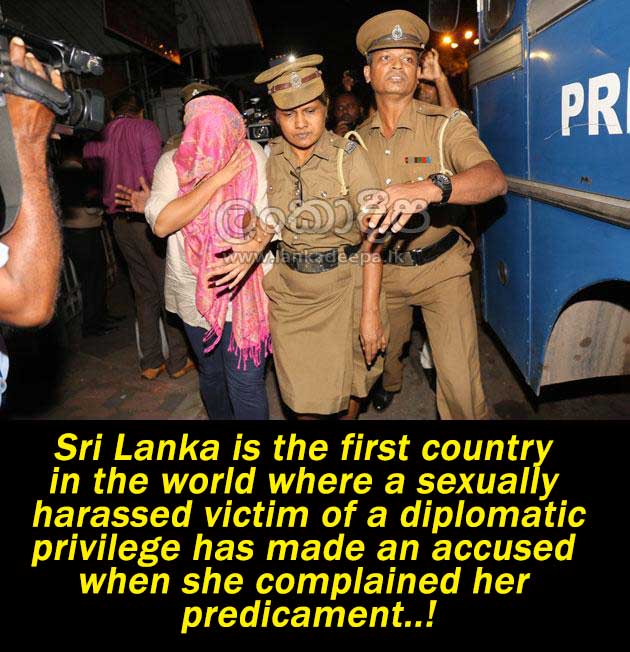 Ganiya was arrested and produced before the Colombo Chief Magistrate today. The attorney general said her statements were contradictory and that there was no evidence of threats and harassment, according to CCTV footage data and mobile phone records taken.

Evidences are not contrary..

The lawyers pointed out that the CCTV camera evidence confirms that she was in anxiety and excitement when she came out from her child's teacher's house.

She has been threatened and sexually harassed inside the house. However, residents say nothing as such happened within the house. Unofficial reports say that the teacher's husband is a member of the Army Intelligence.

The main argument of Ganias lawyer..

One of the main arguments of Ghania's lawyers was that the allegation made to embarrass the government was false because in all her statements she has never said that this was done by a team connected to the government. She has only said that had a predicament. Ganias lawyers questioned, at a time when she, her husband and the embassy has not stated anything about embarrassing the government how could you make such an allegation. In fact, it is the Rajapaksas sordid media who have bragged, that this was a western conspiracy and the work of Tamil Diasporas attempting to embarrass the government.

However the magistrate said since she did not immediately complain to the police the courts ordered her to give a statement to the CID.

Ganias lawyers pointed out the sequence of events. She first said the embassy about the predicament she went through. Next the embassy took the diplomatic measures needed and complained to the Sri Lanka foreign ministry. It was the foreign ministry who told the CID to start an investigation. When the CID started the investigation they wanted her statement. Therefore she gave statements for almost 26 hours. Two other embassy staffs also have given statements. If so how can you allege that she has not cooperated for the investigations? How can you say that she took effort to make the government embarrass. Ganias lawyers urged the courts that she is a victim and not to remand her.

Colombo magistrate Ms. Lanka Jayarathna who did not accept the arguments of Ganias lawyer ordered Gania Banister Francis to be remanded till 30th of this month.

Who made the country embarrassed before the world?

Sri Lanka is the first country in the world where a sexually harassed victim of a diplomatic privilege has made an accused. The government of Sri Lanka means the people of Sri Lanka. Did Gania embarrass the people of this country? the Swiss embassy? or is it Gotabaya’s government? The future would decide.

Following the court ruling, the Swiss media reported the incident as a special news report, stating that her embassy official had been jailed for threatening and sexual harassment and preventing her to leave the country to Switzerland to receive treatment.

Several Sri Lankans in Switzerland told Lanka e News that when the media reported this on the TV inside a bus, the passengers in the bus were being questioned by other passengers as to why such obscene things were happening in Sri Lanka.

I am the victim Gota says..

When Gotabhaya was the Secretary of Defense, few abductees of white van abductions were released by the quick interference of then President Mahinda Rajapaksa. Keith Noir and Poddala Jayantha were two among them. We know although they were tortured they were rescued from after informing president Mahinda. Unfortunately today the president is Gotabaya himself. In future if anyone is abducted and harassed by state sponsored terror groups, according to the experience of Gania all have to willingly choose death instead of getting released.

Following a victory the first 100 days of a government is called the golden hundred days. That is, the people endorse whatever actions the government takes in those 100 days. Most governments make difficult political decisions on behalf of their country at that time. The Swiss embassy event will be very well known of mafia display of Gota’s first golden hundred days.

Before too late it is not the opposition but it would be Mahinda Rajapaksa and Basil Rajapaksa who will teach Gotabaya Rajapaksa a lesson that he cannot govern a country by mafia games.