By a former army intelligence officer 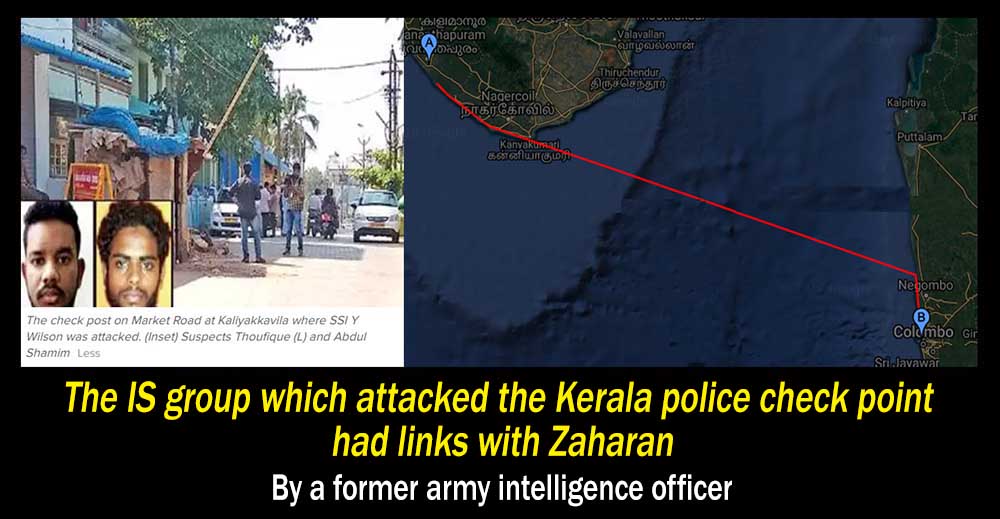 (Lanka-e-News- 14.Jan.2020, 11.45PM) From our previous letter we pointed out how the Indian soil has become a seed farm of the Islamic State. We said about the separation of Kashmir, the change of Muslim marriage and divorce act, transfer of Ayodhya to Hindus and the national citizenship act of India will have critical impacts on Indian politics. The news is becoming a reality now. On January 8th on the borders of Thamil nadu and Kerala two police checkpoints were attacked by Islamic terrorists and killed a sub inspector who was on a special duty. Before the suicide bomb attack on the Easter day Saharan attacked a police check point situated at Wawnathivu Sri Lanka.

The Indian government has able to identify the two Islamic rebels from its CCTV footages. The police and the Indian army have jointly started an extensive operation to arrest the militants who has fled. So far the army has able to arrest 60 Islamic militants with arms. However the Indian security has unable to arrest the two militants who were involved for the shooting. The Indian security has a strong doubt that those militants has fled to Sri Lanka. Information has revealed that the suspects under custody had links with Zaharan. Zaharan was living in India for nearly none months before his suicide attack.

On January 9th aggravating the situation a group involved in a 'red mercury' deal got arrested in India. It was a group of Muslims who have tried to buy this red mercury. Red mercury is one of the most dangerous chemicals in the world that can cause a terrible explosion.

The creation of terrorist groups for geopolitical interests has become worldwide operation now. Terrorist groups such as the Taliban, Al Qaeda and IS are not militant movements created by the masses to achieve the aspirations of the people. Zaharan group was also a similar to the above. These are projects that have been artificially created by some authority to achieve narrow political objectives.

Creating a terrorist group for a government or a powerful nation is a simple business. The difficult task is to keep those militants under control. That is the trend today. Taliban is a terror group created by the US against Russia. The US created Al Qaida to fight against the Saddam Hussain. Eventually, they all fell out of control from the US.

The BJP government in India influenced Islamic terrorism for its narrow political gains. Now it has become a boomerang for them. It has put the entire region in danger. The Easter attack is not an end of Zaharan’s story it is a beginning of a great catastrophe.

You can read the news about the attack on the Kerala police check point from the following link.