A group which plays with the judiciary to save a criminal..! When would attorney general take action against these stoops? 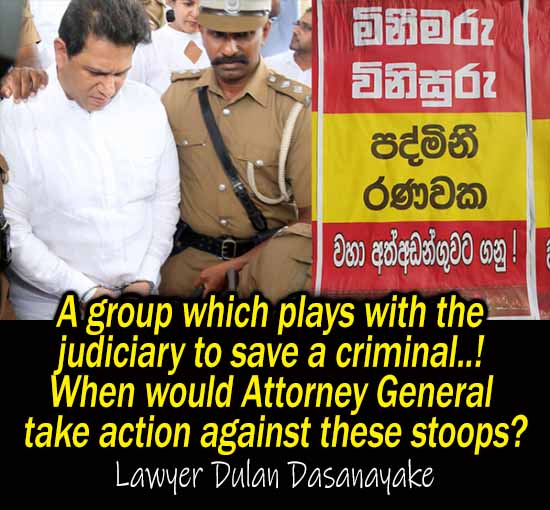 (Lanka-e-News -22.Jan.2020, 3.15PM) A poster captioned “Arrest the murderous Judge Padmini Ranawaka immediately” was seen around the Colombo city today 21st. Padmini ranawaka is a judge working in the judiciary for many years. We do not know any murders she has done. Nothing as such has been reported. However the poster depicted as “murderous judge Padmini Ranawaka”. However what we know is about her is, she one of the two judges who prosecuted Duminda Silva, who was an infamous former parliament mp, the monitoring minister of defense, the brother of an owner of a mainstream Hiru media and his group for the killing of Bharatha Lakshman who was considered a closest associate and a trade union advisor to then president Mahinda rajapaksa.

Through these posters, voice clips, from the protests campaigned by other groups and the media conferences convened by racist monks is aimed for nothing but for the release of Duminda Silva. This campaigned was started from the time this government came to power However the fact is the middle class of the country which was a decisive factor who brought this government into power does not expect the release of Duminda Silva. What they believe is that Gotabaya Rajapaksa is a straight, steady and a persistent man than Mahinda Rajapaksa. They believe that only he can discipline the country. They never expect Duminda Silva to be given a presidential pardon by their leader who has come to discipline the country. Therefore the middle class should be brainwashed saying that Duminda Silva was imprisoned unjustly and his release and freedom is justice. Duminda silva’s brother’s media network, few web sites, few other media institutions, infamous monks and organizations which name them self as national organizations are indulged in this brainwashing process. The above poster is a decisive step to achieve that sordid objective.

Voice records have not been found to influence the verdict.

A controversial voice clips between parliament mp Ranjan Ramanayake and judge Padmini Ranawaka was exposed few days ago. So far there was no disclosure that the said conversation influenced the judgment of a lawsuit. There is an investigation going on currently for the conversation. Under the instructions of the attorney general the Colombo crime has questioned  judge Padmini Ranawaka. Even the judicial services commission is planned to start an investigation of this telephone conversation.

The five judge panel of the highest court has approved

Duminda Silva and the other defendants appealed the decision following due process of the judiciary. Accordingly to hear this appeal, then chief justice Priyasad Dep decided to appoint a five bench judge panel in the Supreme Court. The trial of the bench went on for many days. Duminda Silva’s brother’s news channel continued to broadcast the submissions of the defendant petitioner’s attorneys in the headlines of their channel.

What are they trying to?

It has not been revealed that Ranjan had any connection or influence with these Hon. Supreme Court judges. Despite this by attacking judge Padmini Ranawaka and the entire judiciary is aimed to get a presidential pardon to Duminda Silva and to justify it before the people.

Gotabaya who took maximum out of the independence of the judiciary

They are playing with the judiciary of Sri Lanka which has re-established the trust of the people in the country for the last few years. President Gotabhaya Rajapaksa is one of the most beneficiaries of judicial independence established in the country in recent years. It was due to the independence of the judiciary that the Court of Appeal dismissed the case at the last moment, which could lead him to withdraw from the presidential race. In addition, in many of the cases filed against him, he was able to obtain a number of interim reliefs because of the independence of the judiciary in Sri Lanka. An
atmosphere created the judiciary took a decision without the consent of the ruler as a result, public confidence in the judiciary increased.

Why the attorney general is quiet without taking action against these culprits?

Should we continue to challenge and belittle the decision of a five-member panel of judges of the Supreme Court on behalf of a private interest, by displaying such posters and broadcasting these uncertified conversations through frequencies of the public? When will the Attorney General act against such squalid groups? While taking action against the judges the law should also be enforced against judicial media institutions, gangs and groups that undermine the judiciary.