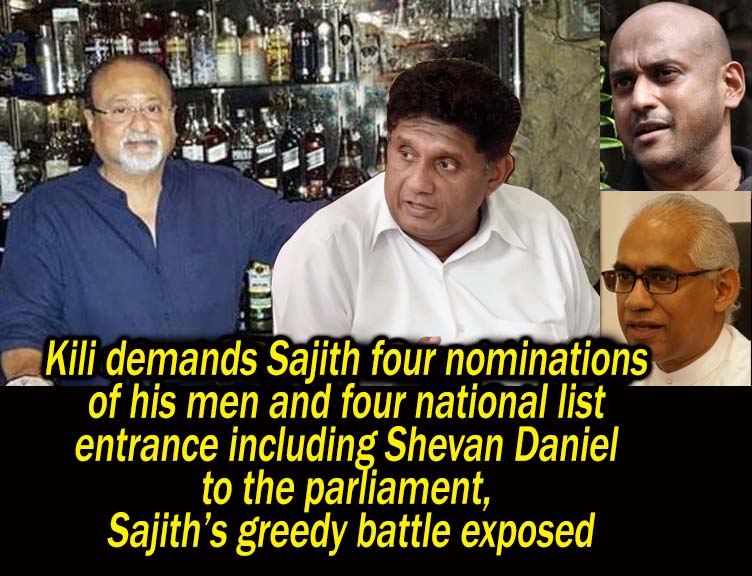 (Lanka-e-News -29.Jan.2020, 6.20PM)  Kili Maharaja has told Sajith Premadasa that he should give nominations for four of his associates and another four of his men should be given national list entrance to at the next parliamentary election

Kili Maharaja and Sajith Premadasa made this statement at a meeting recently. Sajith along with Eran Wickremaratne and Kili, his main business partner Shevan Daniel, were also present. Kili Maharaja has said, Shevan Daniel should be one of the four national list MPs and that he will announce the names of others later.

He further stated that Shevan Daniel should be appointed as the deputy leader of the UNP after Sajith Premadasa takes the UNP leadership.

The purpose of the greedy battle of Sajith and his clang has been exposed now at a time the UNP seniors repeatedly call for Sajith Premadasa to be the leader of the opposition, Karu Jayasuriya as the leader of the alliance and Ranil Wickremesinghe as the Leader of the United National Party.

Few years ago when Ranil Wickramasinghe was the opposition leader he revealed at a press conference that Kili Mharajah has started a campaign through his electronic media to oust him from politics since he rejected Kili Mahaja’s demand of requesting three national list parliament membership. The reporter writing this too went to cover the press conference. Kili Maharaja has not responded to Ranil's allegation up to now. There is a general acceptance among journalists that Ranil Wickremesinghe is a politician who does not tell false to the media.