Nandasena who tried to control the law through demons become remorse, a strong retaliation from the AG 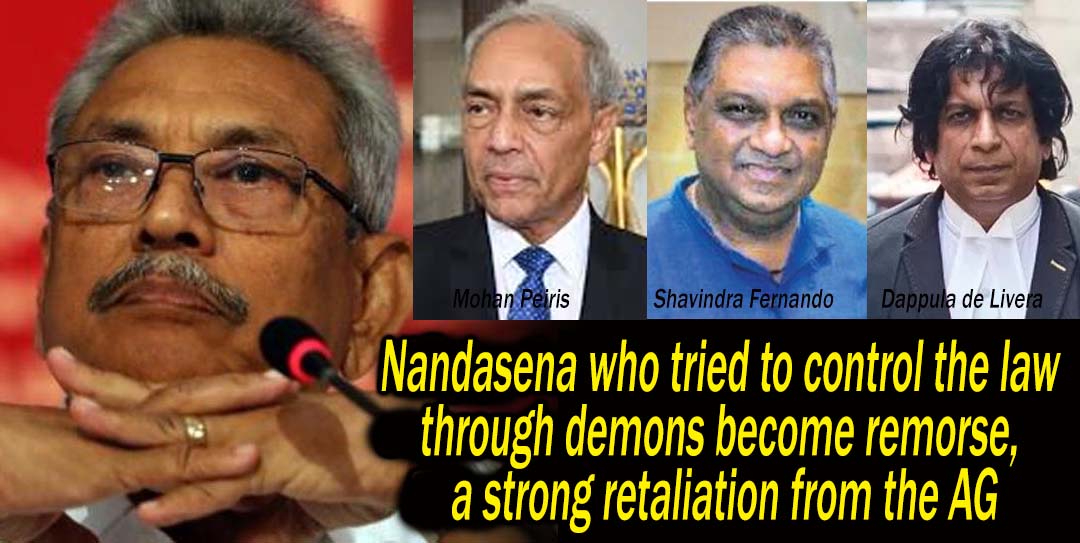 (Lanka-e-News -29.Jan.2020, 6.45 PM) Nandasena Gotabaya who has no experience to abide by the law except practicing lawlessness, fearing people has disposed the laws to dogs for the 6.9 million people who brought him making terror as a weapon on his governance. Although there is a governance structure within the respective institutions, he controls the government institutions by creating a demon on top commanding the institutions. Due to the fear, the institution heads is compelled to work according to what the demons say.

Kamal Gune is a demon..

This started as soon as Nandasena Gotabaya sworn in as the president. When there is no ministry under the President, without a defense minister, Gotabaya has appointed a Defense Secretary and giving orders to all government institutions and to do all what he wants. There cannot be a secretary without a minister in a ministry. Ministries without a minister came under the president before the 19th amendment.

It cannot be done now. In fact, the present secretary of defense Kamal Gunarathne is Nandasena's demon. His orders are not legal. One can go to court claiming that the current secretary of Defense position is illegal. It is unfortunate that the present opposition is struggling for the party leadership but not challenge the illegal appointments given by the government.

The two Gotabaya demons that operate the attorney general..

It was the two demons above Dappula who gave orders to arrest high court judge Gehan Pilapitiya who once locked up Gotabaya inside the courts cell until he pays the bail money. Gotabaya arrested Gehan Pilapitiya in order to scare the judges. However Gotabaya withdrew his arrest, fearing that the judiciary would turn against him amid fierce oppression from lawyers and judges. Meantime Wimal Weerawansa told in the parliament that president Gotabaya prevented the arrest. As a matter of fact the president cannot stop an order given by the attorney general. If so it would be the president influencing the judiciary. This shows that President Gotabaya is behind attorney general giving orders to arrest whoever he wants. It was these two
demons that operate the attorney general department on behalf of Gotabaya.

The president commission consisting culprits who gave orders to the Attorney General..

We have previously reported on the Presidential Commission appointed by Nandasena. It is a commission composed with disgusting culprits. The chairman is a retired judge Upali Abeyrathne alias pissu poosa in legal circle, a stooge of Gotabaya. The second is a retired pension judge Chanadra Jayathilake is an alleged of taking bribes. The last member of Gotabaya’s commission is the former IGP Chandra Fernando who was convicted of two previous presidential commissions. These are the stooges who give orders to the attorney general.

Karannagoda and Dasanayaka complained to the Presidential Commission on the 22nd that the case of kidnapping and killing of students for ransom is a case filed against them on political vengeance.

Nandasena becomes a fool; The Attorney General protects the dignity of his office...

The attorney general department has pointed out the presidential commission that the Attorney General, file cases in the courts based only on evidence produced in the investigations but not based on any external facts. He has further affirmed that the AG department has filed a case against accused Karannagoda, Dasanayake and 14 others at the three bench high court in accordance with the legal powers vested upon him by following all legal procedures.

Attorney general has pointed out to the Commission that there is no legal provision for a Commission to suspend the duties and functions of the complaint without a court order, in accordance with Articles 4C and 105 of the Constitution.

Nandasena Gotabaya would lead Sirisena if legal advice is sought from culprits who creep through legal holes..

President Nandasena Gotabaya should stop this act of treachery using demons to scare the law and the judiciary. Nandasena took oath before the Ruwanweli Seya is to protect the constitution not to violate the constitution. If Nandasena sought legal advice from culprits such as Wijedasa Rajapaksa alias Dealdasa and Mohan Pieris, Nandasena Gotabaya also would become a joker leading Siriena because it was the same group which advised Sirisena to sack the prime minister and to appoint a new prime minister. Finally Sirisena eventually became an international joker. It would be the same to Nandasena Gotabaya.

Opposition leaders must fight for the independence of the judiciary and to uphold the rule of law without killing each other for leadership otherwise, they will also be thrown out from the people.