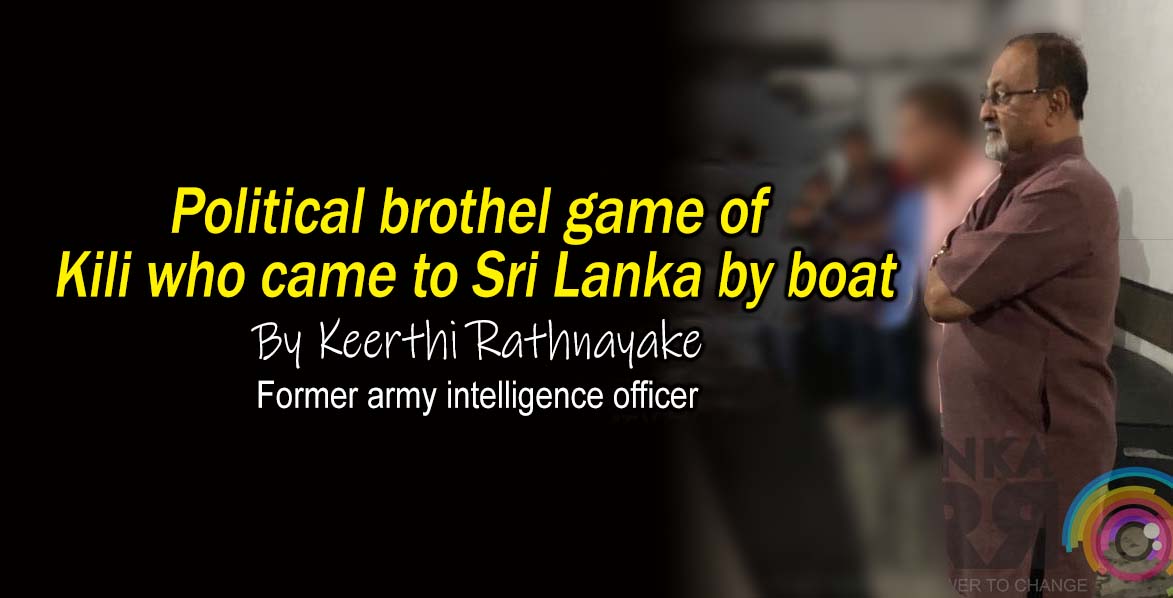 (Lanka-e-News -03.Feb.2020, 6.40PM)  Kili Maharajah has a secret life like Prabakaran. Though he is called as Maharjah he is a Kallathoni. In Thamil “Kalla” means thieves and “Thoni” means boat. People who came to Sri Lanka by boat was named Kallathoni was the reason behind the term Kallathoni. Kili's roots came from India in boats as railway workers. Initially he started his businessmen by doing small contracts to the government. He then ventured into the pipe line industry. Having made good money, he entered the field of media. He eventually got into politics.

Kili who came to Sri Lanka in a boat is going to make KINGS..

Kili once told Ranil that he needs three national list MP posts if he wants the support of Sirasa Media Network. Kili said that Ranil could be raised through the media in exchange for three national list seats. However Ranil disagreed, from then Kili has been chasing Ranil ever since. When Sirisena became the President, a good decade came for Kili. Billions of dollars worth of radio frequencies were given free to Kili. He got the contract to import military equipments to the army. Navy commander Travis Chinniah who opposed the import of a sordid Russian naval vessel deal was sent home in three months.

Kili who has no family wishes the same to others families..

The use of Sirasa media is disgusting. Careful observations of "Sirasa" media it is clearly visible that Sirasa media usage and publicity campaign aiming at dismantling the family establishment and forming a wild generation in Sri Lanka. As the bee sucks honey without hurting the flower, Kili does this operation surreptitiously. Kili may feel the same fate for other families, as his family life has collapsed. Kili is the owner of the infamous Glycophosphate fertilizer which killed many in Sri Lanka. No need for more examples to show the goodness of Kili.

When the good governance came to power, Sirasa protested against the Chinese port city project with cameras on Galle Face for 24 hours. Sirasa created imaginary environmental problems not existed. Sirasa Media Network attacked the Port City project from morning till night, demonstrating its commitment to the environment. Dr. Lin chief executive of Port City who sensed the blackmail of Kili gave kili a contract worth of USD 25 million. This was a business contract to promote the image of Port City. Kili's blackmail business thrived all his business dealings.

Kili who socialize blatant falsehood through his Sirasa media..

As soon Kili got his share the most dangerous Port City became a super project overnight. Since then Kili white washed Port City from his media network. Sirasa named the Port City project as the 'Ranbima' project. Sirasa by going to each village and boasted about a peace monument built brick by brick about this golden project. He said the peace monument is taller than the Lotus tower. Kili is such an illegitimate jackal who socializes blatant lies through his sordid media.

Both the UNP and the good governance under Kili’s custody..

Unfortunately for the country Sajith became a slave of Kili. When Kili was attacking Ranil, Sajith watched at it with delight. Through Shiral and Sirisena, Kili hijacked the 6.2million mandate won in 2015. Country became deteriorated day by day. People were fallen from the frying pan to the fire. However Sirisena and Kile became billionaires. Sajith became a puppet of Sirisena and Kili. They were not bothered about the aspirations of January 8th revolution. Kili’s plan was to take both the UNP and the good governance to his custody. In order to fulfill his intentions Kili laid the presidential candidacy to Sajith.

Citizens are ready to end of Kil's political prostitution..

People taught an unforgettable lesson to Kili and Sajith. There is no reason why Kotelawala's fate would not reach Kili. This is Kili's last few hour of his bankruptcy. Kili has only one more option left. It is only through a Sajith-Gota national government. That's why Kili is trying to send Shevan Daniel and others to the Parliament. That is why Shevan is seeking a position in UNP. Sirisena is also a member of Kili's conspiracy. Sirisena is talking about alliances, which is why he is seeking the co-chairmanship. But citizens are ready to put an end to Kil's political prostitution in the next election.