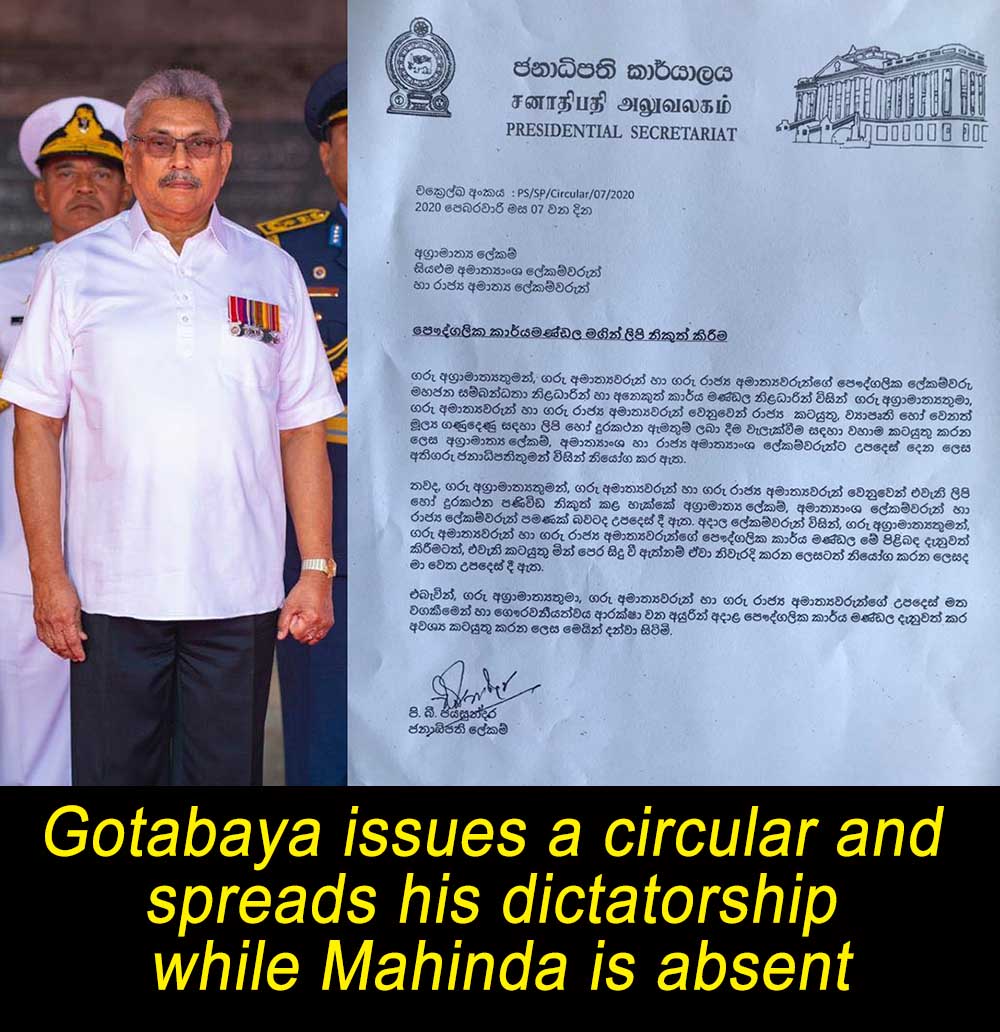 (Lanka-e-News - 10.Feb.2020, 5.45AM) President Nandasena Gotabaya using his executive powers has issued an order to the Prime Minister, Cabinet Ministers and State Ministers, with the signature of his secretary, Jayasundera as soon Prime Minister Mahinda Rajapaksa left to India.

The order issued by the President's Circular No. PS/SP/Circular /07/2020 states that the personal secretaries, public relations officers and private staffs of Prime Minister, Cabinet Ministers and State Ministers should immediately stop calling and sending letters to government projects and other activities.

At first glance, this appears to be a white portrait of President Nandasena wishing to stop corruptions of ministers' personal staff, but it is not. If one say that president Gotabaya has issued such an order to prevent the corruptions of the personal staffs of ministers is false. If such a need exists, Lalith Weeratunga, who is currently out on bail, will not be appointed as his senior advisor, after he has been prosecuted for three years for rigorous imprisonment by the courts for the misuse of public funds.

This is curtailing the powers of the prime minister and the cabinet..

Since the number of cabinet ministers including the Prime Minister is low, one person has a number of ministries. Considering the number of institutions under those ministries, the extent to which a minister is responsible is very large. Ministers of any government politicians are elected by a ballot. They are responsible for achieving the political goals for their elected people. Ministers appoint a staff of coordinating secretaries, including their private secretary, to achieve the difficult political goals set out by the government administrative secretary.

The ministers should bear six faces and twelve hands..

Now there is nothing the minister's personal staff can do under the new directive of President Nandasena. They can only do washing ministers clothes, ironing, cooking, washing the dishes, looking after the minister’s pets and going shopping with the minister’s wife. This specially affects nobody else but the Prime Minister Mahinda Rajapaksa because Mahinda knows how to take the work done from his personal staff but it has become a catastrophe now. Since Mahinda left the country, Nandasena has issued such an order to curb the enmity of Mahinda. We should not forget while Nandasena was the Defense Secretary, it should not be forgotten that many illegal orders were carried out when Mahinda had left the country.

If the ministers' personal staffs are paralyzed, the president should give the ministers six faces and twelve hands. Ministers should now stop their stupid suicidal outcry, as President Nandasena should be given two-thirds majority in parliament.

The accident has come too early..

However, we did not think that Lanka e news would soon have to stand up for the rights of the Prime Minister of the Legislature and the Cabinet, when a retired military officer with a dictatorial mentality, who has no political experience in the country, was appointed. But it has come to us sooner than we thought.