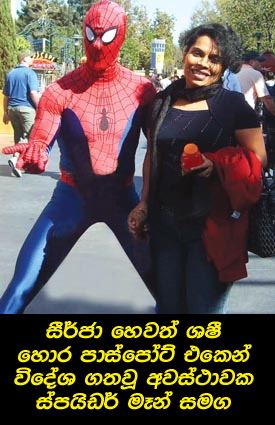 (Lanka-e-News-23.Feb.2015, 11.45PM) Seerja  Udayanthi Weerawansa  alias Sashi Weerawansa , the wife of UPFA ex minister Wimal Weerawansa was arrested yesterday based on a number of charges including bogus passport, identity card, birth certificate obtained via fraudulent means  by preparing forged government documents, and for illicit financial  transactions  . She is now remanded  until the 25 th .

She is however still warded at the Neville Fernando hospital , Malabe with prison officers escort pretending to taking treatment .

When the CID produced a B report before the chief magistrate of Colombo , Gihan Pilapitiya , it was revealed , the diplomatic passport  obtained on bogus papers was issued to her on a written request made by ex minister Wimal Weerawansa under his signature  , according to Immigration and Emigration Commissioner Chulananda Perera.

The CID told court that Sashi Weerawansa who was arrested yesterday for having in her possession a bogus diplomatic passport  tried to escape when the police rounded   her up . The OIC of the prevention of illegal migrants division of the CID , W.A. Jayantha  CI presented the relevant report to the court. The police  also informed   court , that the court medical officer orally informed that the suspect shall be hospitalized for treatment.

The CID requested court for an order to remand her until  2 nd of March . The chief magistrate then ordered that the suspect be produced before the judicial medical officer , and to furnish a written report on whether she is sick enough to be hospitalized, and  on the other hand ,if there is no such need the suspect shall be immediately produced before court.

The police media spokesman in connection with the criminal activities of ex  minister Weerawansa’s wife explained , at Anuradhapura today , at a media briefing ,the suspect had used two dates of birth .The media spokesman further noted that the relevant files in the registration of persons department have gone missing , and it has come to light  what were averred in the complaint are true.

On the air tickets based on these documents , the suspect has travelled abroad several times , and using two identity cards she has done a number of  suspicious  transactions with banks and other financial Institutions , investigations so far have revealed, the media spokesman added.

Wimal Weerawansa  has always been notorious for his backstreet and unscrupulous political  activities. He  is therefore better known as a double tongued double faced politician  among   the political circles. Now it is proved he has been masquerading too under different names . His name at birth is Weerasangili Panikiyage Wimalasena  and it is under that name he secured his education up to grade 9. His education has grounded to a dead halt at that point. Nothing beyond could be reached by him in education. Thereafter , in the eighties , he was working in a small weekend news paper  establishment. During that time this infamous moron  under a spurious name , Wimalasiri Gamlath  posed and paraded as the son of  Sucharitha Gamlath, a famous professor at that time. Subsequently when he became the JVP propaganda secretary , he called himself as Wimal Weerawansa.

If you can draft a request note by husband to state authority, you can obtain a SRI LANKAN DIPLOMATIC PASSPORT without any hassle. LOL Then you get into problem is husband's fault.
-- by Rudy on 2015-02-24

Has this woman with no scruples got any other names. One wonders what else she and her illiterate uneducated husband did to take the Sri Lankans on a ride. He should never be allowed to contest in any elections since he has found that being an MP or a Minister in the cabinet is the quickest way to make money
-- by bindusara on 2015-02-25

What ever the Weerawansas have done wrong doest give Lanka Enews the right to do so! This is a photoshoped picture of Mrs Weerawansa, and a bad one at that...look at her right hand, closely... she is holding a child's hand! Come on guys report the Correct News, please...
-- by marky mark on 2015-02-26