Sajith becomes the first UNPer to oppose the 'elephant' symbol; Sajith gets out of working committee 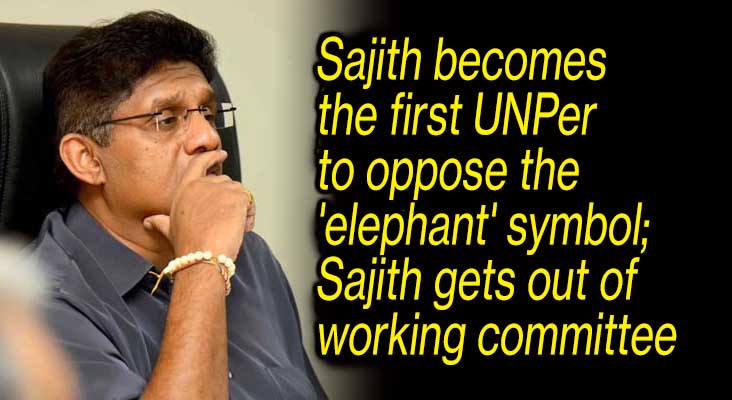 The UNP working committee discussed for two hours at length how to contest the next election. It was outlined in detail how the UNP suffered a loss due to the reduction of 12.5% to 5% threshold required to rally the party. Otherwise it was revealed that even in 1994 parliamentary elections, there was a possibility of forming a government with 121 seats but not 112 seats with 5% threshold. It is in this backdrop that alliances have to be formed with the help of minority parties. However it was further outlined that the UNP always contested in elections using the elephant symbol. It was the opinion of the majority that the UNP and the alliance should contest at the next election with the elephant symbol was not a problem for the upcountry Tamil political parties or to the Muslim parties.

However Sajith Premadasa, who is a puppet of Kili Maharaja, held a different view. He called the Alliance as the “United Alliance Force” and the symbol of the Alliance is the heart. It is believed that Sajith would buy this party and its name by paying. However, many tried to ridicule the attempt to use the heart's symbol for a political movement.

Sajith Premadasa walked out of the working committee meeting, saying that if he is the leader of the alliance he cannot be a puppet of the alliance as the majority seemed to be against it. Following him were Harin Perera, Sujeewa Senasinghe, Ranjith Madduma Bandara, Chandrani Bandara, Harsha de Silva, Thalatha Athukorala and Kabir Hashim.

The UNP working committee unanimously decided that the next parliamentary election should be contested as an alliance and that the symbol should be the elephant.

Although Sajith is said to be the leader of the alliance and Madduma Bandara is the secretary of the alliance, such an alliance has not yet been formed. It has no name. There is no constitution or agreement between the parties. Sajith's alliance is still in the air.