World's worst conspiracy led by owner of a television channel..! 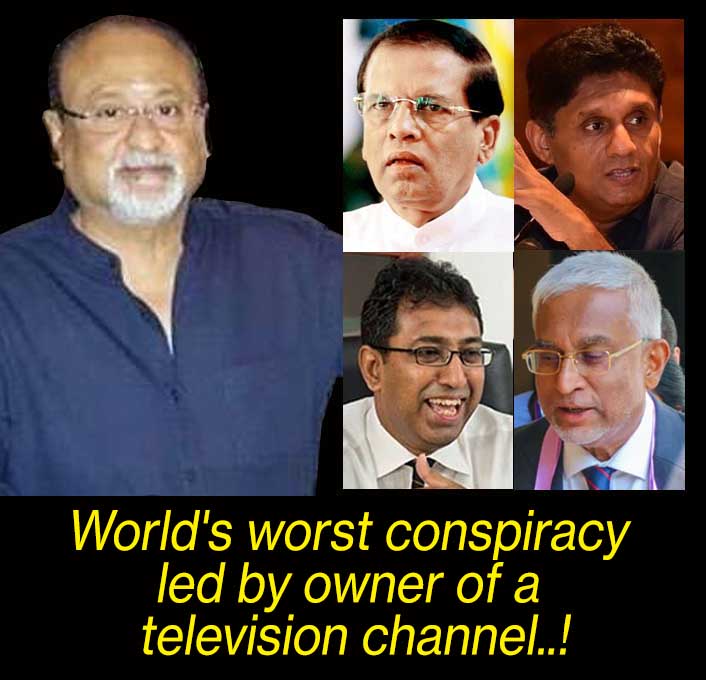 (Lanka-e-News -11.Feb.2020, 9.30PM) Nielsen Company is an active research institute in Sri Lanka. It is not a social service organization but a racket that is hidden from the eyes of the people. They are the ones who label most popular companies and popular personalities. For example, according to Nielsen's report, "We're the most popular television in Sri Lanka," Hiru channel says reaffirming survey according to Nielsen's report.

They not only rank institutions and individuals, but also make recommendations for ceremonial awards. They also rank actors. But what Nielsen reports is not the reality of the earth. Financial benefits and sexual bribes induce Nielson to produce ranks. Dr. Harsha de Silva was the pioneer in establishing this institution.

After establishing Nielsen, Harsha was the managing director. Harsha hooked on to Ranil in 2008. Since Harsha was a royalist Ranil could easily be in the net. It was Ranil who brought Harsha to parliament in 2010 from the UNP National List.

Dr. Harsha, who entered politics in 2010 with Ranil's help, betrayed Ranil. Dr.Harsha together with Kili Maharaja and Sirisena, launched a horrific coup to chase Ranil. It is now proved that Harsha is the one who has given false reports to the Sirasa  to embarrass the good governance about the central bank bond issue. However what matters is the back ground story.

The decade of vandalism, bond companies and judge Prasanna Jayawardena..

How professor Harsha has got these reports is astonishing. Ajith Nevard Cabraal was the Governor of the Central Bank during the vandalism decade. During the bond scam there was another Ajith who was involved in this racket. It was Ajith Terrance Fernando the chief executive officer of Capital Alliance. The two Ajiths were the two thieves who struck illegal deals together.

The sons of Dr. Harsha and former Supreme Court Justice Prasanna Janewardene have worked together at Capital Alliance, owned by Ajith. Prasanna Jayawardena was a member of the three-member Presidential Commission appointed by Sirisena to investigate the Central Bank bond scam. Capital Alliance was one of the foremost licensed primary dealers during the vandalizing decade.

When the good governance came to power in 2015 the situation of the vandalizing decade of violence and corruptio went upswing. Capital Alliance, which made abnormal and huge profits, lost its address. When the perpetual treasury made Rs. 5000 million profits, Capital alliance of Ajith’s profit was Rs. 57 million. The company of Dr. Harsha’s  and judge Prasanna sons fell into bankruptcy.

The terrible conspiracy launched by Kili..

In view of the above, it is not difficult to understand why Dr. Harsha's and Justice Prasanna Jayawardene are against Perpetual Treasuries. The prodigious story begins now. Kili who took the whip on to this hand acquired judge Prasanna, Dr. Harsha, Sirisena and Sajith to his custody. Sirisena became a subtle conspiracy of Killi launching his mission. We don’t write how judge Prasanna became the pawn of Kili because he is not living anymore.

If it did happen !

Kili's plans included removing Ranil and making Sajith the Prime Minister, appointing Dr. Harsha as the Governor of the Central Bank and Prasanna Jayawardena as the Chief Justice. If that were the case, the judiciary, the central bank, the executive and the parliament would all be in Kilis hands. It was probably the most terrible conspiracy in the history of a plastic pipe manufacturer and television/news channel owner. Fortunately Judge Prasanna Jayawaradene’s death caused before this would rest his soul in peace.