The Coronavirus: an Islamic perspective 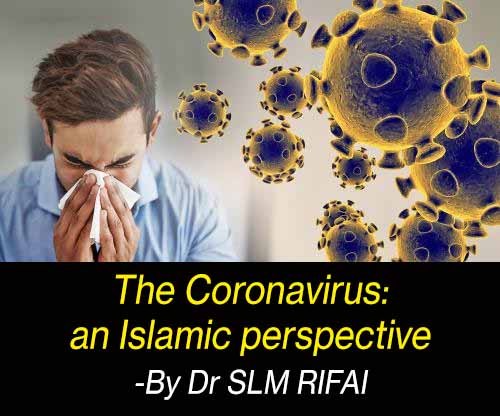 (Lanka-e-News -13.Feb.2020, 11.30PM) How should we read, analyse and examine this natural calamity of coronavirus? As a Muslim community how should we respond to this natural disaster? How should we share our thoughts and ideas about this natural tragedy on Chinese people? How should we express our sympathy and empathy for the people of China in this difficult time? Islam promotes a sense of universal human brotherhood. People of China are our brothers and sisters in humanity. Islam teaches us to take care of people in their suffering and difficulties, even if they do not share our faith and culture. Islam demands us to look after people when they are sick and difficult situations. Muslims all over the world must help people of China in this difficult situation. We are obliged morally and religiously to offer our moral and material support for all those who have been inflicted by this contagious virus in this way. Rather than expressing our sympathy and empathy in this difficult time, it is unfortunate to see some section of Muslim community to engage in some philosophical and religious arguments over this coronavirus.

This is not merely a problem of Chinese people alone rather this is a universal problem of humanity. It has become a humanitarian crisis that posts an existential threat not only for Chinese community rather for the international community. If this virus becomes an uncontrollable virus, it could post a greater danger for human family. At this crucial movement, there is no need to engage in any philosophical or theological argument about this problem. It could hurt feelings and sentiments of Chinese people. Instead of engaging in unnecessary polemic arguments, we must make special prayers and supplications to save people of China from this natural catastrophe. Yet, we notice Muslims are prejudicial and judgemental as if Almighty God has given them a special permission to speak on behalf of Him on this issue. Natural disasters such as earthquakes, landslides, avalanches, tsunamis, outbreaks of plagues and diseases are taking place in accordance some physical and natural laws. We cannot rationalise divine wisdoms behind all these natural disasters. Yes, nothing happens in this world without a divine knowledge and without a divine permission. Yes, according to Islamic theology, even a leaf from a tree would not fall without divine knowledge.

Human beings cannot rationalise divine actions and divine acts. We cannot provide a rationalization for all divine actions. We can not ask God why He lets all these natural disasters take place? Qur’an tells us about God and His qualities. “He cannot be called to account for anything He does, whereas, they will be called to account” (Quran: 21:23). Commenting on this issue, Yasir Qadhi notes that “No one among us is qualified to speak on behalf of Allah. We are not in a position to declare why something is happening. Or to link a general tragedy to specific evil. And we are not demonstrating mercy when we claim all the people being subjugated to this are being punished for a crime most of them have nothing to do with” So, to claim that this calamity inflicted on Chinese people because their government has persecuted Uighur Muslims does not convince us that much.

The Coronavirus has created some debates, arguments and controversies among Muslim academics and jurists. Some argue that the spread of this deadly virus is nothing but a divine punishment. Some others argue this is nothing but a testing and warning for Chinese government. Some others argue this is nothing but a natural disaster like many other natural disasters. We should examine the different dimensions of this problem. There are some cultural, social, medical and religious dimensions attached to this problem. I do not deal with all those dimensions in detail here.  Unlike, Judo-Christian and Muslim people, Chinese people eat many wild animals, insects and creatures. It is claimed that this virus has spread through human interaction with snakes, bats and other animals. It is claimed by some Muslims that Chinese people are eating some animals that are prohibited in Islamic law that is why this virus has spread. Qur’an and prophetic traditions have laid some general rules about eating animals. Each edible animals, insect and creatures are not mentioned in the primary sources of Islamic law.  All what Qur’an says is that “ ( Prophet) say, “ in all that has been revealed to me I find nothing forbidden to people to eat, except for carrion,  flowing blood, pig’s meat-it is loathsome or a sinful offering over which any name other than God’s has been invoked” (9:145). In addition to this, the prophetic traditions have alluded to some animals and birds that are forbidden to eat. The Prophet forbade the eating of any wild animals with a canine tooth. This includes predatory animals such as lions, wolves, dogs, and cats and of any bird with talons. This includes falcons, eagles and other similar birds. Yet, we can not make a generalization to say that Chinese people have eaten unlawful things in Islamic law and that is why they have been inflicted with this disease. One can argue that they have been eating all these animals for centuries and yet, this is the first time they have been inflicted with this disease. Moreover, people in Middle East and Africa did not eat dogs and snakes. Yet, they were inflicted similar virus such Mers and Ebola.

Some section of Muslim community believe that this contagious virus is a divine punishment for Chinese government for its atrocities against innocent Uighur Muslims. There is no secret that this Chinese Government has been persecuting over one million Uighur Muslims for no reason except they are Muslims. Islamic identity of this  Muslim community has been wiped out, their names have been changed, their Islamic dress has been changed, their mosques have been demolished, their children have been  separated from parents and Chinese officials have stopped Muslims from praying and fasting.  They have burned down the holy Qur’an, they have been indoctrinated with Chinese communist ideology in their so called -Re-Education camp.  It is reported Chinese government has written their version of Bible and Qur’an.  It is reported that Uighur Muslim ladies have been raped and killed by Chinese armies.   Chinese armies have been beating and torturing Muslims in this so-called modern world for no reason, but these people are Muslims.  Yet, international community could not do anything about it. 1.6 billion Muslims in 53 Muslim countries could not do anything about it. The entire world-maintained silence over this broad day atrocity. UN could not do anything about it.  Human right commissions could not do anything about it. over one million innocent Uighur Muslims are being tortured for no legal reason except they are Muslims. According to some Islamic scholars divine intervention comes down when there is not any human protection for innocent people. They argue that the entire world let them down and God intervened with his divine punishment on Chinese government by sending his army of Coronavirus. This is in fact, a theological and philosophical argument.

Qur’an tells us “God sent his invisible forces” (Qur’an: 9: 26). According to this group of Muslim scholars, this coronavirus is nothing but an invisible divine force that sends a warning to Chinese authorities. No doubt that contagious virus is has shaken Chinese establishment. It is reported that Chinese premier went to some Chinese mosques asking Muslims to pray for the country to recover from this disaster. According Bible and Qur’an the divine intervention comes down to earth when aggression, injustice and transgression exceed all divine limits and boundaries. The Holy Qur’an tell us how previous nations were destroyed when the rulers violently transgressed, the divine intervention came down in many occasions.
Just consider this verse. “ Have you ( Prophet) considered how your Lord dealt with people of ‘Ad of Iram the city the lofty pillars, whose like has never been made in any land and the Thamud, who hewed into the rocks into the valley, and the mighty and powerful pharaoh, all of them committed excesses in their land and spread corruption in there. Your Lord let a scourge of punishment on them and your Lord is always watchful. (Qur’an: 88: 6-8). This is supported by many verses in the Qur’an. “corruption has flourished on land and sea as a result of people’s actions and He will make them to taste the consequence of some of their own actions so that they may return back” Qur’an: 30;41. They claim that they Chinese authorities has inflicted heavy punishment on innocent Muslim people and yet, no one defended all these innocent people and yet, divine intervention came in support  of these people to teach a lesson to all these aggressive Chinese armies. This is likeness of the concept of Karma in Buddhism and in some other religions. “actions affect both doers and those around them in unimaginable ways.

This group of Islamic scholars argue that divine intervention comes on earth in many forms. It could be through natural disasters, it could be through calamites, it could be through infectious diseases like this. They make some sort of affinity and connection between divine punishment and human actions. They strongly believe that nothing happened on this universe without divine wisdom and without any reason. They believe that there is a reason for all incidents in this universe a big or small one. Some could argue that it is Chinese government that has done all this yet, this contagious virus is killing people indiscriminately babies, children, old and young. Why innocent Chinese people suffer with this natural disaster for the wrongdoing of Chinese government? A lot of atheists and nonbelievers believe that there is not any connection between this virus and religion. They argue that this is a health problem rather than a religious problem. This virus does not discriminate between Muslims and Non-Muslims, between Chinese and non-Chinese rather this a humanitarian problem that humanity faces today. They strongly believe that there is no need to relate this virus with any religious faith.

Anyway, we should not be hastily judgmental on any natural disasters.  Natural disasters can strike any nation, community and any individuals any times. China with its mighty armies and technology could not stand for an invisible virus. This tells a lot about weakness of man in front of mighty divine power. Modern man is so arrogant with his advancement in science and technology: He thinks he has conquered nature with his knowledge and yet, natural disasters like this reminds him of his weakness and powerlessness in front of Almighty God. This virus has sent a greater message to all dictatorial political leaders around the world.  They behave arrogantly with their military and political power and yet, invisible virus like can teach them a memorable lesson in life. Will they learn any lesson from this?