Udayanga remanded till the 26th.! Judge displeasure over the police.! Udayanga gets a confidential call.! Ukraine asks for Udayanga.! Udayanga's life is in danger.! 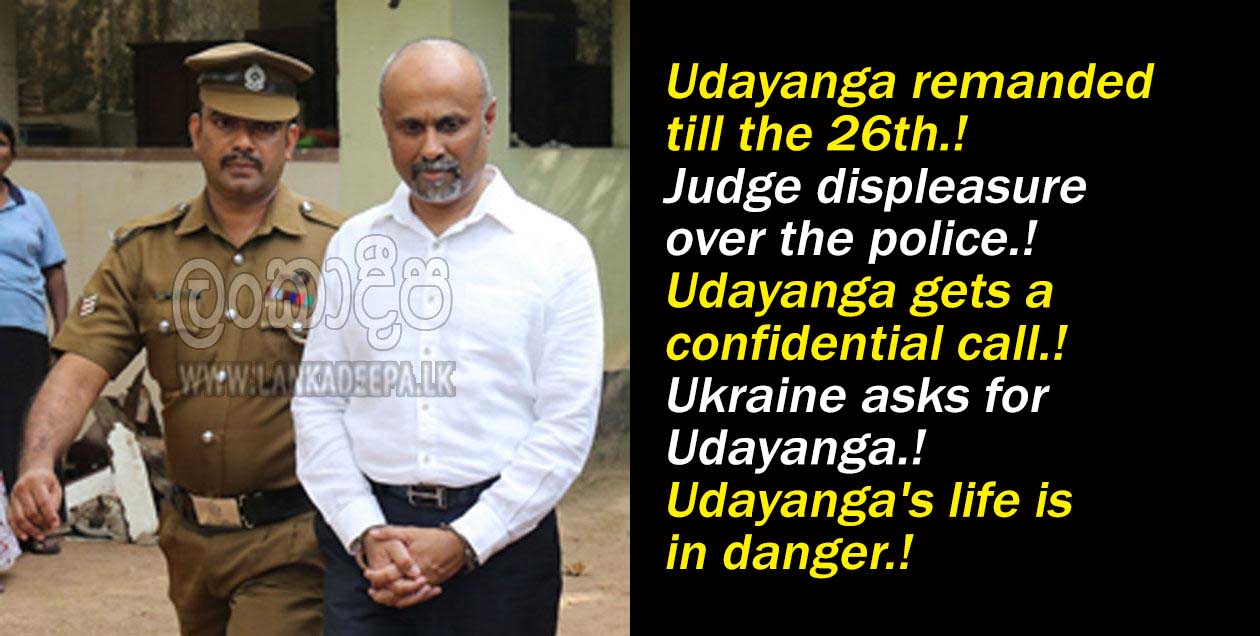 (Lanka-e-News- 18.Feb.2020, 11.00PM) The president and the prime ministers cousin Udayanga Weerathunga who was arrested and remanded upon his arrival at the Katunayake airport on suspicious for the mig air craft deal, selling arms seized by the LTTE to Ukranian insurgents and for a mysterious murder was produced before the fort magistrate Ranga Dissanayake until 26th of this month.

Udayanga has been produced before the courts on last Monday, alleging that he has committed an offense under Section 454, 457 and 400 of the Penal Code and Section eight of the Public Property Act.

Detectives and legal officers has altered the law..

The Magistrate made several serious statements. The reason for this was the transfer of Chief Inspector Nihal Francis who was investigating this crime from March 2015 to January 2020 for the past 5 years to the Negombo Police from the CID after the appointment of the new government. The problem that has risen due to this is the handing over the investigations to a new police inspector named Sanjeewa and his ignorance of the investigations. The case has been further complicated by the change of law officers who have so far been represented by the Attorney General's Department. Magistrate Ranga Dissanayake said serious concerns has to be taken against the bail application when removing the detective officers who investigated this crime and changing the legal officers who appeared for the case for last five years.

Since Udayanga's investigations under the Public Property Act are not over and B report certified by an ASP or higher officer for damages of more than Rs. 25,000 is required for further remand and no such report has been submitted by the police.

The fate of the police is unimaginable..

Magistrate Ranga Dissanayake said he could not even understand the situation of the current police plunged into.

The magistrate requested Thusith Mudalige appeared for the the Attorney General's Department to issue an order to the Inspector General of Police (ASP) to hand over the investigation to Nihal Francis and ASP Pavithra Dayaratne who supervised the investigations before. The magistrate said that he was not authorized to do so, but instead ordered the acting IGP to explain the court whether the two previous officers could be linked to the current
investigations.

Magistrate Ranga Dissanayake said he cannot comprehend the situation of the police has plunged into.

The magistrate told the open court that the police had not produced the required certificate of the ASP despite the government having incurred a massive loss of US $ 7 million. The magistrate said whichever officer investigates, in the end the complaining party is the Sri Lankan police and it is strange that the police are ignoring the investigation. The magistrate said that he suspects that none issuance of the certificate was a deliberate act and that he had seen in the history that the investigationg officers create an atmosphere required to grant bail. Due to the seriousness of these allegations, the casual approach and irresponsible behavior of the police it could be lead to public turmoil if bail is granted. Therefore he refused the bail application and further remanded the the suspect until the 26th of this month.

Meanwhile, according to Lanka-e-News, Ukraine has also asked Sri Lanka to to send Udayanga for their investigations. Ukraine is also investigating Udayanga's Mig aircraft deal and the supply of arms and ammunition to Ukrainian insurgents. Since Udayanga is also a Ukrainian citizen, Ukraine has the right to appeal for him. Udayanga played with Ukraine when Ukraine was under Russian control but now the situation has changed. That was the reason Udayanga was hiding in Dubai.

A phone call shortly after landing at Katunayake..

When the Dubai government decided to deport Udayayanga to Sri Lanka an ASP and a police inspector went to Dubai on the request of the Dubai government. Udayanga came to Sri Lanka along with them. As soon he got out from the plane an officer gave a mobile to Udayanga and informed there was a call for you. Udayanga who walked far without hearing to any CID, spent half an hour talking to the call on the other end. The person on the other end was none other than Udayanga’s cousing Nandasena Gotabaya.

However the first suspect of this case is not Udayanga Weerathunga but the current president Nandasena Gotabaya. When Udayanga breath blocks it is Nandasena who become breathless. If Nandasena cannot stop the proceedings in both countries, it is very likely that Udayanga will be subject to a "natural" death at the Remand Prison. The history of Sri Lanka has proved that not only relatives but power is beyond the relationship of father and son.