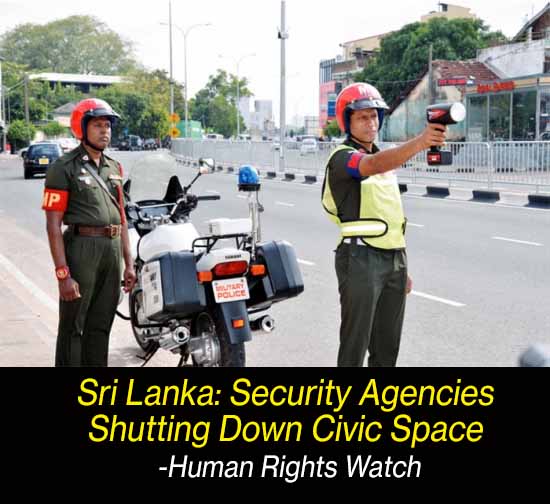 (Lanka-e-News -04.March.2020,11.30PM) Sri Lankan security agencies are stepping up surveillance, harassment, and threats against human rights activists and journalists, Human Rights Watch said today. Since November 2019, when the government of President Gotabaya Rajapaksa came into office, there has been a rapid closing of civic space and freedom of expression.

In interviews with 15 Sri Lankan human rights defenders working in different locations around the country, Human Rights Watch heard consistent accounts of increased surveillance and pressure from security agencies. Several said that intelligence officials had asked activists and victims about their advocacy plans ahead of the current United Nations Human Rights Council session, which began on February 24, 2020 in Geneva. “We fear that international lobbying and travel to Geneva may not happen in future because of this situation,” one activist said.

“Since the return of the Rajapaksas to power, a state of fear is being re-established in Sri Lanka,” said Meenakshi Ganguly, South Asia director at Human Rights Watch. “The activities of the government’s security apparatus are evident in some violent attacks and public death threats against activists and journalists, but also in equally dangerous actions happening out of sight.”

Rajapaksa has placed a number of important civilian agencies under the Defence Ministry, including the civilian police and the NGO Secretariat, which regulates nongovernmental groups, among dozens of others. He has appointed a serving military officer as head of the civilian intelligence agency and a retired general, Kamal Gunaratne, who is accused of war crimes and crimes against humanity, as defense secretary.

Over the past three months, unidentified people have physically attacked journalists several times, and issued death threats against reporters perceived as critical of the government. Security officials have searched media offices. The Defence Ministry announced on January 24 that it had drafted a new cybersecurity law to prevent people from publishing “defamatory posts” on social media. The proposals have not yet been published.

Several human rights activists described receiving repeated phone calls from intelligence officers. Some of these calls have apparently been to tell activists that they are being watched at that moment. On other occasions the caller asks questions or issues threats or warnings.

One human rights defender said that “everything has shifted into a critical situation. After the election, military activities including monitoring and inquiries have increased. They are following us. That is a huge threat for human rights groups.” Another activist said: “We collected stories and documents. Now we’ve stopped everything. We did a lot of work. Now, zero.” A third activist said she so constantly feels under surveillance that intelligence officers “might even be in the next seat on the bus.”

Police and intelligence officers have sought to instil fear in rights groups by visiting their offices and demanding staff lists, home addresses, and other personal details. One activist said the authorities came to his office demanding this information, but then revealed that “they knew already everything. My personal details, they knew it. This is part of the intimidation.”

Many of these activists carry out research and advocacy on abduction, torture, murder, and enforced disappearance allegedly committed by security forces, including members of the intelligence agencies and the military, between 2005-2015 when Gotabaya Rajapaksa was defense secretary during the administration of his brother Mahinda Rajapaksa, who is now prime minister. During those years the United Nations found credible evidence that the Sri Lankan government was responsible for war crimes and crimes against humanity.

An activist whose group works on so-called “white van” abductions and enforced disappearances allegedly committed by intelligence officers under the previous Rajapaksa administration said, “It is in question what will happen to me and my staff.” Another activist said, “I am even more scared because the kind of inquiry that has been happening is about people’s families, so that is even more frightening than if they are asking about our official activities.”

The intelligence agencies have also begun to target the financial and administrative records of nongovernmental organizations over the last five years, and especially details of funding from donors abroad. Activists fear the authorities will allege accounting errors as a pretext to shut them down or to bring criminal charges.

On February 26, the Rajapaksa government said it would no longer abide by Human Rights Council resolution 30/1, which Sri Lanka endorsed in 2015. Resolution 30/1 commits Sri Lanka to ensuring truth and justice for past abuses. An activist said that Sri Lankan human rights groups that worked in support of Resolution 30/1 now find themselves vulnerable: “Now the government is saying you are urging the people to disturb the peace [by supporting resolution 30/1]. They say, ‘You have no right to do it.’”

Members of the Human Rights Council should, as a matter of priority, support a new resolution to establish an international mechanism or tribunal to address past crimes in Sri Lanka, Human Rights Watch said.

On February 14, the United States banned Sri Lanka’s army chief, Gen. Shavendra Silva, from travel to the US due to “his involvement, through command responsibility, in gross violations of human rights, namely extrajudicial killings” during Sri Lanka’s civil war. Other countries, including EU members and the United Kingdom, should follow suit and impose sanctions on him and others credibly accused of serious rights violations and war crimes.

The EU should also remind Sri Lanka of its human rights obligations under the European Union’s GSP+ system of trade preferences and of the consequences of failing to comply.

“Sri Lankans are seeing their civil and political rights being stripped away and replaced by authoritarian structures at a rapid pace,” Ganguly said. “It’s crucial for the UN Human Rights Council to remember the past, respond to the warning signs, and resolutely insist on fundamental human rights principles, including delivering justice to victims.”