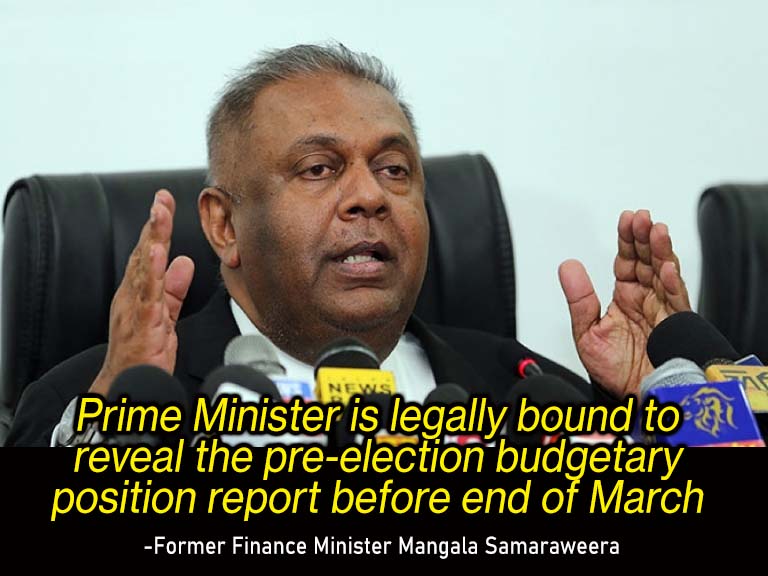 (Lanka-e-News- 22.March.2020, 7.00PM) Prime Minister Mahinda Rajapaksa, who as the Minister of Finance, has the legal responsibility to release to the public a Pre-Election Budgetary position report containing information on the fiscal position of the country before March 23, 2020.

The Fiscal Management (Responsibility) Act No. 03 of 2003 warrants the Secretary to Treasury to publish a Pre-Election Budgetary Position Report containing details of government revenue and expenditure, details of Government Borrowings within three weeks of the proclamation on the holding of Parliamentary General Election.

Since the Parliament was dissolved on March 02, the report should be released to the public before March 23, 2020.

The Section 16 of the Fiscal Management (Responsibility) Act which was introduced during the UNP Government in the year 2003 says:

“The Secretary to the Ministry of the Minister, shall within three weeks of the publication or Proclamation or Order requiring the holding of a General Election for the election of members of Parliament, cause to be released to the public a Pre-Election Budgetary Position Report containing information on the fiscal position of the country.”

In Sri Lanka, the Government is the creature of the Constitution and accordingly: “Parliament shall have the full control over public finance.” This is the opening line of our Constitution’s chapter on finance. It does not mince words. Parliament - not the President or Cabinet – has supreme and unequivocal control over taxation and expenditure.

On the revenue side, Section 148 states, “No tax, rate or any other levy shall be imposed by any local authority or any other public authority, except by or under the authority of a law passed by Parliament or of any existing law.”

Similarly, on the expenditure side, Section 150 states that all public expenditure must be approved by a “resolution of Parliament or by any law been granted for specified public services for the financial year during which the withdrawal is to take place.”

The Pre-election Budgetary Position Report shall contain the following information for the current financial year: (a) estimates of revenue and expenditure; (b) estimates of the Government borrowings; (c) the economic and other assumptions that have been used in preparing such estimates; (d) a statement of the risks, quantified where practicable, that may have material effect on the fiscal position, such as—(i) contingent liabilities including guarantees and indemnities given by the Government under any Act.

It further specifies that the publicly announced proposals for spending by the Government that have not been included in the estimates, Government negotiations in progress and not finalized and (e) such other information as may be necessary to reflect fairly the financial position of the Government as at the date of the said report should be clearly mentioned in the report.

The publication of this report is of grave importance at this point in time. Despite the Opposition and relevant Parliamentary Committees requiring the government to table a detailed estimate of the effects of their grossly irresponsible and profligate tax cuts – tax cuts that put us on a bullet train to bankruptcy – the government has failed to do so. Parliament and the country do not know how much revenue the government has lost and whether it will put us in a debt trap. As worryingly, the government has tried to implement these fiscal measures without bringing in a bill in Parliament. This is unconstitutional, illegal and undemocratic.

As Finance Minister, I did not pass a Budget in October so as to allow the victor at the Presidential Election to pass their own budget, in accordance with the mandate they received. This is what we did in 2015, when we were a minority government. But this government has not brought a budget. It has not brought a single piece of economic legislation. It has left us all in the dark. Instead it attempted to engage in fiscal ‘jilmart’ using the unheard-of procedure of a supplementary Vote-on-Account. It has also packed the key Parliamentary Committees relating to public finance, COPE and COPA, with members who are part of the Executive. The convention has been to ensure that members of committees, especially those relating to finance, are backbenchers. This ensures that conflicts-of-interest are limited, helping the committees to perform their watchdog accountability functions effectively.

In order to set the record straight, I also take this opportunity to repeat the Opposition’s position on the supplementary resolution to the Vote on Account that the Government withdrew. Despite the irregular departure from past practise, the Opposition had no objection to the developmental activities contained in the supplementary Vote-on-Account. We only rejected attempts to increase the country’s debt burden. As for the claim that money was needed to pay debts that our government had left behind, that is a lie. First, from 2016 to 2020, government revenue was non-trivially greater than government non-interest government expenditure. 2017 was the first time this was the case in 63 years. Second, all expenditure for 2019 was contained in the 2019 budget. Therefore, there is no need to increase the debt ceiling.

As Sri Lankans ready for the polls, we have no way of knowing the fiscal position of our country at this economically perilous juncture. Both domestically and internationally, the portends of crisis are becoming ever more frequent. Instability is in the air. But there is no budget. The Government has hidden information from Parliament on the state of public revenue, expenditure and debt. Changes in the tax code have been implemented without the Parliament’s approval. In such a situation, it is imperative that the Treasury Secretary ensures timely publication of the Pre-Election Budgetary Position Report. Only then will Sri Lanka’s citizens be able to make informed and wise choices at the polls. We deserve nothing less.