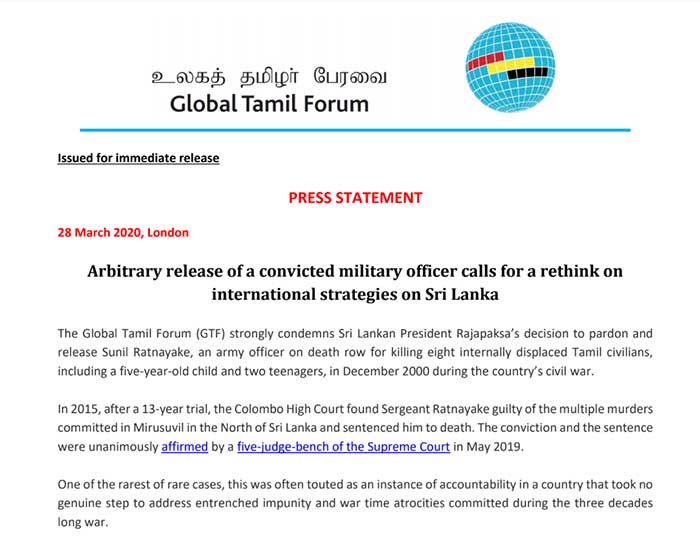 In 2015, after a 13-year trial, the Colombo High Court found Sergeant Ratnayake guilty of the multiple murders committed in Mirusuvil in the North of Sri Lanka and sentenced him to death. The conviction and the sentence were unanimously affirmed by a five-judge-bench of the Supreme Court in May 2019.

One of the rarest of rare cases, this was often touted as an instance of accountability in a country that took no genuine step to address entrenched impunity and war time atrocities committed during the three decades long war.

UN High Commissioner for Human Rights has strongly condemned the presidential pardon, calling it an affront to victims and yet another example of the failure of Sri Lanka to fulfil its international human rights obligations to provide meaningful accountability for war crimes, crimes against humanity and other gross violations of human rights.

US Congressman  Eliot Engel, the Chairman of the House Foreign Affairs Committee, tweeted that he was 'troubled by Sri Lankan President pardoning soldier convicted of murdering civilians, including 5 year old girl, during the country's civil war' and adding that 'this action calls into question Sri Lanka's commitment to post-war accountability and reconciliation.'

Amnesty International has condemned Sri Lanka’s actions stating that using the pandemic as an opportunity to release those convicted for heinous crimes is reprehensible and that it was despicable to have that semblance of justice reversed through an arbitrary executive decision.

This arbitrary action by the Sri Lankan government sends a deeply disturbing message – military perpetrators of horrific crimes, even in a rare chance of convicted in a court of law, will be pardoned and released.

Sri Lanka may have opportunistically timed its action to coincide with the pandemic gripping the world. But, the trajectory of the Sri Lankan government and the direction it is heading – withdrawal from the sponsorship of the UNHRC resolution, militarisation of the senior administrators of the government and now this blatant reversal of justice delivered in a court of law – leaves no room for ambiguity.

The Sri Lankan state and its institutions will never exercise accountability for war-time atrocities and will always find a way to let the offenders go free.

It is crucial that all progressive forces in Sri Lanka, irrespective of their ethnic, religious or political affiliations, rise to the challenge to impress upon the citizenry about the importance of adhering to international norms on human rights, rule of law and good governance. The reckless steps the government is venturing would only lead towards diplomatic isolation and economic stagnation.

For all countries that consider human rights and adherence to international law as a cornerstone for a decent and civilised world and as a basis for international relations, it is time to end the diplomatic charade that Sri Lanka on its own will deliver on accountability and reconciliation, and to seriously explore alternate strategies and options invoking universal jurisdiction by States and creating an international impartial accountability mechanism to help Sri Lanka deal with its unfortunate past.