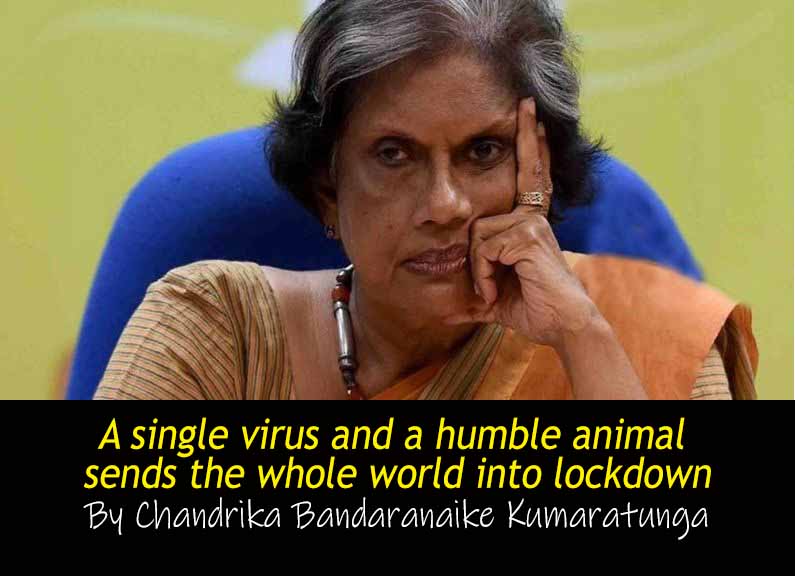 (Lanka-e-News- 03.April.2020, 11.30PM) The world has been attacked by the most widely spread pandemic the world has ever experienced.  It has had seismic effects on the entire world – almost no country has been spared from its terrifying repercussions.

We, humans, prided ourselves that we had conquered Mother Nature.  We indiscriminately destroyed her bountiful forests, thereby destroying large numbers of wildlife or creating unnatural conditions in which humans were called upon to live in close proximity with wild animals.  We heartlessly polluted her rivers. Lakes and seas and the air that we breathe in the name of increased GDP and economic growth rates, regardless of the long-term dangers of all living beings.

We now find that we are knocked senseless by one single virus carried to us by a humble bat.  The entire world has been forced into lock-down.  We are only beginning to comprehend the possible outcome of this global viral attack on the national and global economy.  Not only would we have to re-think the whole paradigm of development, our concept of life and how we live it will change radically.

National Governments are acting individually in heroic attempts to contain the spread of the disease.  International and regional organisations to have gone into lockdown mode themselves, due perhaps to the unpreparedness of these organisations for the present situation.  Nobody seems to have imagined that the shock and awe attack by a single virus could create such havoc, at such an unimaginable scale as the Corona Covid-19 virus has done.

It is evident that the first thing to do in this emergency is to control the spread of the disease, while medically caring for those who are infected by it.  I would call this, dealing with the result of a deep and serious problem.

It would be most constructive to study the origins of the problem – how and from where the present Covid virus came to infect the human being.

Innumerable theses are being expounded presently about the origins of the virus, the manner in which it spread, and so on.  Even conspiracy theories are being circulated widely through social media.  At this time it is essential to base our understanding and explanations on established scientific facts and not various bits of somebody’s vivid imagination.  We must inquire if the theories that are put forward to us have any solid scientific basis.  If not, believing all this nonsense could lead to diverse political and human conflicts.

Serious research has demonstrated that as far back as 13 years ago in 2007, academics have raised alarm with regard to “wet markets” and the indiscriminate consumption of wild life in China, the Far East and countries in South America, as well as in many other countries worldwide.  Several papers by Chinese academic Cheng and others in their Paper written in 2007, gives a clear warning :

"Coronaviruses are well known to undergo genetic recombination (375), which may lead to new genotypes and outbreaks. The presence of a large reservoir of SARS-CoV-like viruses in horseshoe bats, together with the culture of eating exotic mammals in southern China, is a time bomb. The possibility of the re-emergence of SARS and other novel viruses from animals or laboratories and therefore the need for preparedness should not be ignored."

Then Yi Fan and others in a Paper published in 2019 give an ominous prediction:

"Thus, it is highly likely that future SARS- or MERS-like coronavirus outbreaks will originate from bats, and there is an increased probability that this will occur in China."

Scientists at the forefront of infectious disease surveillance and research and epidemiologists have been warning their Governments and the whole world about the imminent danger of consuming wild animals as food.  It is unforgivable that the relative Governments, as well as international organisations, took no notice of this.

We are aware that the illegal international wildlife trade and the wet market trade of wild animals earn the Chinese economy as much as US$ 74 Billion per annum.  The short and medium-term cost to Governments by the COVID 19 pandemic will likely be much more than fifty-fold of that value.

Didier Sicard, a French specialist of infectious diseases, working at the Institut Pasteur in Laos has noted that bats have harboured the Corona virus in their bodies since millions of years and can, in certain circumstances, disperse them to humans and other animals.  The destruction of virgin forests in Laos, for instance, has rendered it possible for bats, which normally live deep in the forests and caves, to begin to live close to human habitation and hence open up the flood-gates to spread the infection.  In this epidemic, we know how dangerous contact could prove for the spread of the virus.

We are aware that the starting point of this pandemic is a public “wet market” in Wuhan where wild animals such as serpents, bats and others are kept crowded in cane baskets.  These animals are bought and consumed as delicacies.  This market is known to be crowded with animals and human beings and is not famous for its levels of cleanliness.  Hence, infected animals would have infected other animals, which in turn would have infected people.

In a seminal article written by Tara Schlegel,* she expresses surprise that our countries seem to be mainly interested in producing vaccines, treatments and re-animation which is admittedly the immediate requirement but shows little or no interest with regard to the cause and the origins of the virus.  The problem is further compounded by our knowledge that wild animals are effectively at the origin of a large number of epidemics since the beginning of time – the Plague, HIV, bird flu, Ebola are some recent examples.  It is said that bats carry some 30-odd corona-type viruses.  Snakes of all types live in the same caves and forests inhabited by bats.  When bats die in their caves they are eaten by serpents, which thereby become infected by the virus.  It is also thoughts that other animals/insects such as ants could be infected.  All this makes it evident that extensive research needs to be undertaken to study the entire chain of contamination caused by the bats.

The study of the relationship between the Covid-9 carrying bats and their contamination of serpents, in addition to ants and other animals which live in close proximity of the serpents, and how they could infect humans becomes essential if we are to understand how humans contract the virus and how we could control the spread of it.

The accelerated destruction of forest cover in Indo-China and China could be a certain cause of bringing human habitation unnaturally close to that of wild animals and thereby promoting the propagation of various diseases, including the Covid Virus.

1. Global action appears essential for joint programmes of research to study the origins and the chain of transmission of the virus, about which I have given details above.  This implies an in-depth study of the animals which transmit this virus.  It would also imply the study of other animals such as rats, which are known to transmit the bacteria that causes plague.

3. To promote close and effective co-operation between Governments under the aegis of International Organisations such as the UNO and regional organizations and the WHO, for the development of medical treatment, preventive vaccines, etc. to fight the covid-19 virus.  The WHO will have to re-structure itself to meet the present emergency, as well as other similar health emergencies which seem imminent in our world today.

To achieve this, it is proposed that an international meeting of a selected number of former and present leaders of Government, together with experts, be summoned without delay, with the objective of formulating policies and a programme of action.  This process could be coordinated and/or led by the UNO.