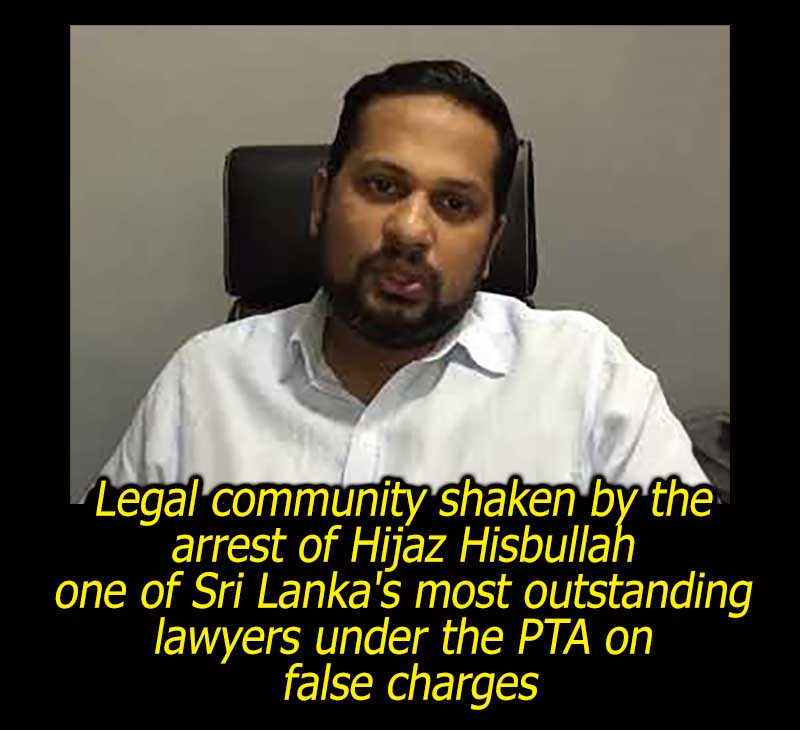 (Lanka-e-News- 16.April.2020, 5.30 AM) The Sri Lankan legal community and people who value freedom are deeply shocked by the arrests of Hijaz Hisbullah, an outstanding lawyer ever produced by Sri Lanka who appears for civil and criminal cases under the Prevention of Terrorism Act and detained under the Defense Secretary's detention orders by the infamous Gotabaya Rajapaksa’s semi police and military government on false allegations, reports Lanka e News.

Pro Rajapaksa media allege that lawyer Hijaz Hisbullah was arrested in connection for the Easter attack, further he is the lawyer of the former minister Rishard Bathiudeen. However,  propaganda is completely false.

It is the duty of Lanka e News to introduce to the general readers who this lawyer Hijaz Hizbullah is.

When we hear the name Hisbullah we all think about Hisbullah from the east, but Hijaz Hisbullah has no kinship with the eastern Hisbullah. Hijaz Hisbullah’s native place is Mountlavania and his pedigree is qualified intellectuals such as doctors, lawyers and professors.

Attorney Hijaz Hezbollah attended the prestigious St. Thomas College Mountlavania and once he was the Head Prefect of the school. Following his legal education, he served at the attorney general department for ten years as a state counsel. He resigned from the public service and started practising as a lawyer privately. There he focused on human freedom and human rights in particular. Being a minority, he had to pay special attention to the violation of the rights of minorities.

He maintained close ties with minority civil society organizations and attended lectures about law at those conferences.

Hijaz, who is still a young man of 43-45, excelled in the Colombo Law Society due to his legal knowledge, expertise in logic and his ingenuity in presenting cases to judges. One of the culmination of his career was the appearance for a petition filed by a member of the Elections Commission Professor Hoole for a Human Rights Petition case filed by ten political parties and civil society organizations in the Supreme Court before a seven members panel of judges against the former President Sirisena’s 52-day coup. The legal arguments he presented during the proceedings helped to win the case.

Hijaz Hizbullah is an excellent lawyer who is not afraid of anyone threatening to sue him when taking cases. While many lawyers are reluctant to pursue fundamental rights cases of extremist attacks on churches and mosques C.J. Hijaz Hizbullah is one of the leading lawyers like Weliamuna and Lakshan Dias. The best evidence of lawyer Hijaz not afraid to face the intimations of extremists groups was his appearance for the rights of Dr. Shafi’s incident which rocked the country amid intimidation and threats made by extremists.

If Colvin had been accused of Hijaz..

Lawyers are a group of professionals who advocate for the client's freedom by presenting legal arguments on behalf of the client. Similarly, if the client's accusations are made against the lawyer who represents him, that is crazy, absurd, and ignorant. In that case, the legal profession cannot be maintained.

When Colvin reached home his mother reprimanded him. “I taught you not to kill people but to help people live” she said. Since then Colvin has never advocated criminal cases since he promised his mother, from that day he appeared on behalf of the defendant.

The number of defendants he saved from the gallows is numerous. His arguments for breaking the prosecution's evidence to save the defendants from the gallows have been in folklore ever since. In all those murder cases, the defendants escaped the gallows. No one has ever accused Dr. Colvin R. de Silva of assisting the criminals. Colvin's reputation rose. The people of the country were very aware of the role of lawyers.

Secrets of tapping the suspect's lawyer..

However, the slavery society infested by the Rajapaksas with racism and religious extremism is not so. It is common to deprecate a lawyer who appears on behalf of a suspect rather than a defendant. If a Muslim or a Tamil is involved in the incident and if the lawyer is Muslim or Tamil it would be very unfortunate.  The Rajapaksas' cynical media has also been instrumental for these brazen acts.

The wicked process has been implemented against Hijaz Hisbullah. His clients include several suspects currently in custody in connection with the Easter bombing. That’s his profession. It is up to a lawyer to charge money for a client's case. Negotiating with the client or his relatives is a matter of his or her profession. On the basis of that, the lawyer was arrested under the Prevention of Terrorism Act and detained under the orders of the Secretary of Defense for having links with the Easter bombing is definitely nothing but lawlessness and dictatorship.

The Rajapaksa police-government is seeking nothing more than a naked dictatorship to prevent any lawyers from coming forward. This is a clear intimidation to the legal community.

Neither the Attorney General nor the Bar Association has been informed..

If a lawyer was arrested there is a procedure to inform the Bar Association of Sri Lanka. It began with the murder of lawyer Liyanarachchi who was murdered in the custody of 88-89 insurgencies. All successive governments have followed the process. However, the Bar Association has not been informed about the arrest of Hijaz Hizbullah. The arrests were not made in the manner what the media stated. He was called to the CID to obtain a statement and when he came he was arrested. The Attorney General has not been consulted on the matter.

Following the incident, Hijaz's trusted lawyers met Ali Sabri, a close associate of Rajapakse, but he has avoided them. They have met the President of the Bar Association Kalinga Indratissa but he too had avoided him as he was the one who brought the Rajapaksas to power.

Closure of courts to a full-scale dictatorship junta..

Hijaz Hezbollah has no space to go before the law because of the Supreme Court is closed today. Even the Court of Appeal is closed. Under the cover of the Corona epidemic, the government of Rajapaksa's semi-police force will step foot into a full-fledged totalitarian junta. Although the Kovid 19 virus has been removed from the world, it is doubtful if it will be removed from Sri Lanka because of the Kovid 19 virus has been a divine blessing for the Rajapaksas to pursue their cruel objectives.

Finally, one should be stated. That would be the last demand of the Rajapaksa slave community for a military government. Upon receiving it, no one, including slaves would be allowed to make any other demand.