Demanding democracy from a president with false certificates is silly 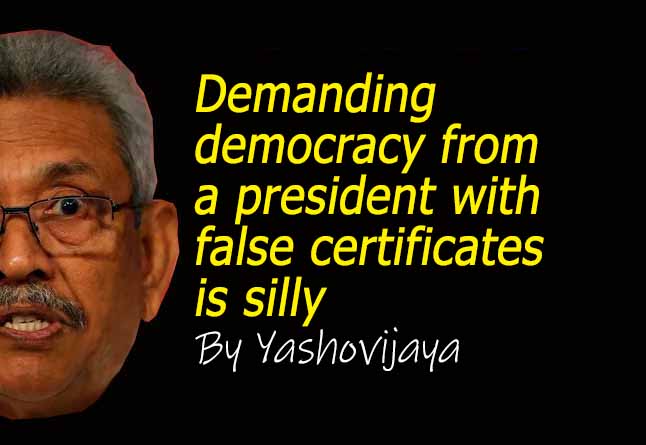 (Lanka-e-News -27.April.2020, 10.35 PM) Gotabhaya Rajapakse became president by a theft. His dual citizenship was not resolved as his proper citizenship of Sri Lanka had questions. In addition, many criminal charges were pending in courts against him. He and his group who were absolutely unfit to be a country’s leader were able to go the final gate for the presidency of Sri Lanka by disgustingly abusing the legal grounds with the help of the chairman of the election commission. Mahinda Deshapriya and his group were able to furtively mute few those who had the backbone of filing protests against Gotabaya's candidacy. This is where the democratic features that hitherto prevailed in the face of various obstacles were completely assassinated.

There is an irrefutable truth that anyone who has seen the truth or who wants to see it. Although Gotabaya introduced himself that he came to build the country he was appointed to the position in a most coarse manner. This is like a thief who wants to break the till of the temple and build a Buddha statue. Shouldn't we understand this bitter truth first of all?

A cow cannot identify itself as a cow in absence of its horn..

If a person who understands this fact lives in the island, demanding parliamentary democracy from the current president is a cow that has no sense of its stupidity.

Gotabhaya Rajapakse does not care about the basic administrative system of a state in keeping with parliamentary traditions. According to him, the road this country followed was wrong and it can be led to straight only by his own vision. His philosophy does not contain parliamentary traditions or basic administrative ethics. This is the same with the clergies who were in the caves around him.

The poacher who dance according to China..

As the writer stated in a previous article, the current president is a 'single-game' planner. It was an administration that gradually slipped into failure. It was isolated from the world and only China was getting closer.

Within a few days of his coming to power, Gotabhaya Rajapakse, who blamed China by appeasing India, changed his mind and thoughts. The latter has now become a Samaritan of China trying to get his dance on the line.

Fortunately, the corona epidemic came. In China, the so-called communist bestial regime is responsible for the lives of everyone who is sick and dying. However, there is not a single politician in the country who has the courage to state it directly because many of them cannot afford to lose China in order to continue their corruption. Transparency and accountability for loans, aid or investments from China are of little importance. China does all this to maintain the corrupt factions of the countries they want, not to help the entire population. This will enable to plunder the money receive from China. This is the reason why successive governments cheer China.

Gotabaya administration is parallel to that. The Corona epidemic is a tragedy for the people, but for those in power, it is a very good offer. The country's most famous thief and opportunist, Basil Rajapaksa, is in the forefront of managing the donations. He has no legal right to manage the finances of the current government.

The Rajapaksa battalion that came to power by exposing pseudo-patriotism by insulting the Sinhala brains is once again playing the old game beautifully. Basil Rohana is the character who best suits the game.

Recently Thalatha Athukorala told a story that could comprehend the depth of it. Since the present government does not act with transparency, let us assume that she spoke the truth. According to her estimate, the amount of assistance the current government has received to combat the corona epidemic is around two hundred thousand million rupees. Also, a residential fund has been set up against the coronavirus. Various media report on the funding provided by state institutions. Is there any benefit to the state apparatus by having the funds of the government institutions and making a presidential fund? Unfortunately, the funds received for the country have been turned into a single-family following the Corona epidemic. The family is well aware that the problem is solved when it shares a portion of these funds to the monkeys around them. As a result, Sinhalese have come to the conclusion that the value of their self-esteem is only five thousand Rupees. Following this they decide to take the entire process to his family liking. But there is a story heard from around the corner. That is, in terms of Parliament's powers to manage the finances.  They say it is the president's responsibility to ensure the legal power of Parliament.

However, it is foolish to demand parliamentary democracy from someone who has been a warrant from the judiciary for producing false certificates and fooled the majority of the country after becoming the Executive President of the country.