Media Release By The Friday Forum 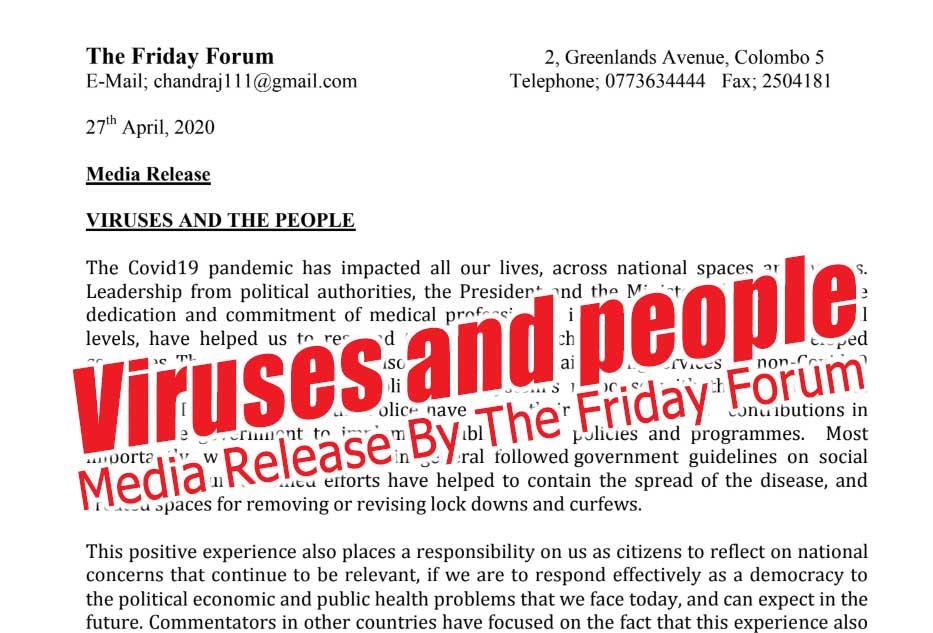 (Lanka-e-News- 28.April.2020, 11.45 PM) The Covid19 pandemic has impacted all our lives, across national spaces and oceans. Leadership from political authorities, the President and the Minister of Health, and the dedication and commitment of medical professionals in the public health system at all levels, have helped us to respond to this crisis much better than in some developed countries. The private sector has also contributed by maintaining services for non-Covid19 patients, and supporting the public health system's response with their professional expertise. The military and the Police have made their own important contributions in helping the government to implement public health policies and programmes.  Most importantly, we as citizens have in general followed government guidelines on social distancing.  Our combined efforts have helped to contain the spread of the disease, and created spaces for removing or revising lock downs and curfews.

This positive experience also places a responsibility on us as citizens to reflect on national concerns that continue to be relevant, if we are to respond effectively as a democracy to the political economic and public health problems that we face today, and can expect in the future. Commentators in other countries have focused on the fact that this experience also gives us an opportunity to re-imagine our development priorities. This is vital in areas such as health, education and housing, climate change and environmental protection, and use of technology including IT, to improve the quality of life of the People.

Critical issues of democratic and accountable governance must be discussed in public and private fora, and continue to engage our attention.

The Friday Forum suggests that the following matters are of especial importance to all citizens:

1. Continuing commitment to a system of Parliamentary democracy introduced 70 years ago.

This is not a time to reject democracy and replace it with authoritarianism in the name of strong leadership. The response to the Covid19 pandemic has shown us very clearly that effective political leadership can be given, especially in a time of national crisis, when it is combined with space for the contribution of relevant stakeholders in making decisions.

World history, as well as the post-independence history of Sri Lanka, shows how a government elected with a huge majority (a 2/3) can soon transform itself into an authoritarian regime, in the name of "the People". Democratic governance can never be confused with the domination of the majority, for democracy requires respect for the fundamental rights of every citizen and not just a majority. A central concept is that all people are entitled to respect for all the rights guaranteed in the basic law, the Constitution of a country.

Up to last year, there was a consensus that we must abolish the Executive Presidency, and move towards a system of governance with an elected Parliament, a Prime Minister and Cabinet. This was not accomplished before the last Parliament was dissolved. We need an assurance that Constitutional reform promised by a newly elected Parliament will strengthen democratic institutions for accountable governance, and incorporate even stronger guarantees on fundamental rights, that include access to basic needs. All parties must guarantee to us citizens that they will not transform themselves in to an authoritarian government through electoral majorities. Democracy must never be confused with government only for the majority, and justified in the name of the “popular will.” Democracy recognises that the State must exercise power in governance, but also defines the limits of those powers in the interests of all the People. This is the balance that a written Constitution strives to achieve. Constitutional reform proposed by all parties at this election must guarantee to us voters, that this balance will be maintained.

2. We have witnessed in the last few years the crumbling of a once respected legal system, where citizens claimed and enforced their rights against abuse of State power. The People have become familiar today (even during this terrible crisis) with arrests (often without charges) successful and unsuccessful bail applications, and political interference with police investigations. Persons convicted of serious criminal offences or charged with such offences in ongoing court proceedings, have smoothly transitioned into holders of high public office, even as advisors to the President. Presidential pardons have been given to persons convicted of murder, when appeals have been dismissed by the highest judicial authority, the Supreme Court of our land. All this has undermined the confidence of citizens in the justice system, and the Rule of Law.

We must demand that Constitutional reform addresses this cancer, and reinforces the independence of the judiciary, protecting them effectively from political interference. We as voters must demand that we will not tolerate and legitimise the breakdown of the legal system that we have witnessed.

3. If these objectives are to be achieved we must, through our votes, send the right people to Parliament. Proposals to recall the dissolved Parliament are met with a public outcry -"we do not want these same people back again!” However sadly, the same people associated in the public mind with massive corruption, buying crossovers in Parliament, abuse of power in governance, and criminal negligence in protecting the lives of citizens because of petty political concerns, have again been nominated by political parties as candidates. If these people return to Parliament can we expect change? We must exercise our votes to reject these persons who have over and over again proved their incapacity to work for the People. We must elect candidates from any party, who can help us to begin a journey on the new re-imagined path of progress and development that our country desperately needs, at this time.

4. The government has placed important responsibilities on the military, in responding to the crisis. It is in the nation’s interest that the Military support the civilian administration and the public health system. However, we must remind ourselves that they cannot acquire a status that goes beyond that role. It is also very important for the nation that the media should act responsibly at this time and not undermine this standard of democratic governance. Similarly, the police are accountable for exercising their powers and responsibilities with respect for the fundamental rights of citizens. Our Supreme Court has reiterated this position over and over again in their decisions.

The recent notice of the Police Media Unit on arrests for criticism of officials responding to the public health crisis on the internet raises serious issues on citizens’ rights to freedom of speech and information and seems to have gone unnoticed by the media and the Bar Association. Citizens’ rights to freedom of speech and information have been recognised in our Constitution and court decisions as essential to ensure that the public can find out the true facts, and that decisions on public health are made with due consideration for the lives and safety of everyone. Indeed the Constitution under Art 15(7) and 14 (A) gives the Supreme Court the power to review administrative decisions restricting these rights on the ground of public health. This is to ensure that the State power of regulation in a public health crisis is not abused.

5. The President, when he took office assured all of us that he is the President of all the people of the country and not just those who elected him into office. This statement demonstrated the political leadership that this country needs, to heal the wounds of conflict embedded in our past. We must remind ourselves that the manner in which the State and private media and some health officials publicised the ethnicity of Covid19 victims, their families and locations, has encouraged racism and prejudice in our communities. The insensitivity with which the practice of burial of the deceased in Muslim communities has been portrayed in the media is deplorable. Cremations of these persons, and other victims has been publicised in TV news bulletins with total lack of respect for the dignity and privacy of the victims, their families and communities. Funeral rites are important for all our diverse communities, linked with closure for the loss of loved ones. If the State wishes to regulate these practices on medical and scientific grounds related to protecting the public from the virus, decision-making must be based on consultation with faith and community leaders, and a representative body of medical professionals. The government’s unfortunate lapses must not be repeated. This is the time to give critically important political leadership in rejecting religious and ethnic extremism, promoting unity and empathy for each other, in our collective interest.

(The Friday Forum is an informal group of concerned citizens pledged to uphold norms of democracy, good governance, rule of law, human rights, media freedom and tolerance in our pluralist society.)