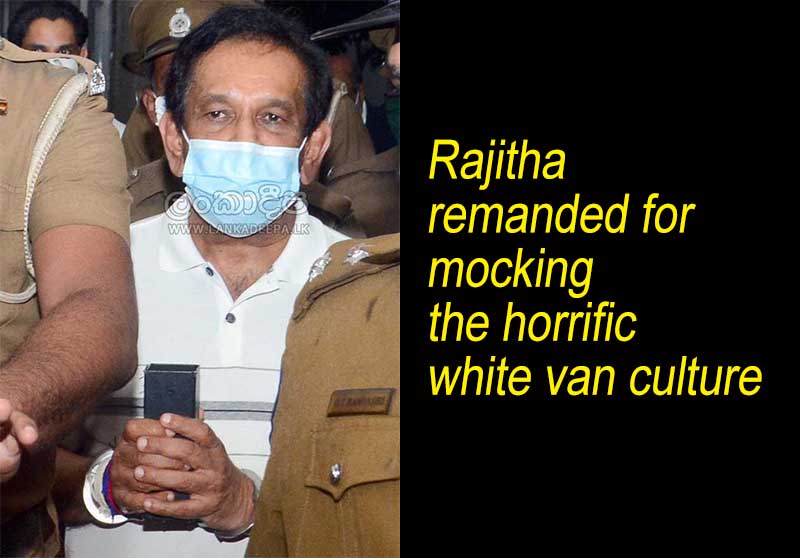 The two who was summoned to the above press conference is also currently in remand custody. During the period Rajitha was admitted to a private hospital without being arrested and released on bail. The Attorney General's Department filed a petition in the High Court against the bail. Deputy solicitor general Dileepa Pieris appeared on behalf of the petitioner and presidents counsel attorney Anil De Silva appeared on behalf of Rajitha Senarathne during the hearing on which the judgment was given yesterday 15th. High Court Judge Manjula Tilakaratne, who heard the petition, ruled that the bail was incorrect.

High court judge Manjula Thilakarathne said that it is wrong for the magistrate to grant bail ignoring the CID notice produce to the courts from which Rajitha has violated the section 14 of the bail act. He pointed out all magistrates the importance of CID reports when granting bail. However this notion has been slipped by the Colombo chief magistrate when granting bail.
The Colombo High Court Judge ordered the Colombo Chief Magistrate to revoke Rajitha's bail and ordered to take further action. Following the order Rajitha was produced before the Magistrate's Courts on the 13th and remanded till 27th of this month.

At a time when an epidemic has struck the country despite it is not a good virtuous to imprison the former Minister of Health who has done a great service to the country's health sector, but some well-wishers say that Rajitha should be imprisoned because of the mockery he made of the white van abductions which was a terrible reality during the decade of the Rajapaksa vandalism. Most of those abducted in white vans could not speak about the horrible experience, but a journalist like Poddala Jayantha was fortunate enough to reveal his experience to the world. In spite of the fact that Rajitha and the other good governance stakeholders failed to apprehend a single white van abductors despite being in power for five years made a mockery of the white van abduction at the last moment. Rajitha summoned two tomfools who arrived in the spotlight and claimed that the abductors had been killed in white vans were thrown into a lake to feed the crocodiles. Rajitha and those tomfools did not say where in Sri Lanka there is such a large number of crocodiles. As such, Rajitha was mocking the entire white van culture of the Rajapaksas' vicious decade. (Lanka e news did not report that media conference) As such, Rajitha was mocking the entire white van horrific culture of the Rajapaksas' vicious decade. Partners of the good governance say thet they don’t mind Rajitha to be locked inside for the idiotic event he did.