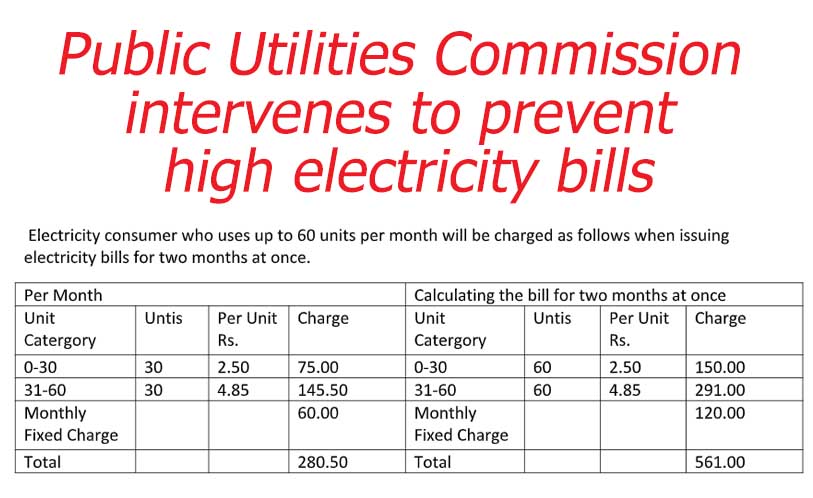 The guidelines prepared by the PUCSL set forth in this regard will be implemented by the CEB and LECO.

The following recommendations are implemented for preparing bills that come under quarantine curfew time period, to ensure maximum justice is provided for consumers.

1. All bills issued after the quarantine curfew commences and after the final reading of the meter must be issued on a monthly basis and as separate bills for each month, confirming the entitlement of the concessionary rate for the electricity units (prorate basis).

2. The grace period given to the consumer to pay the separate bills issued to them will be published by CEB and LECO. Accordingly, there will be no disconnection of electricity with regard to the payment of these bills until the relevant grace period and conditions are announced.

3. The time gap between the last meter reading and the next meter reading can be more than one billing cycle. Therefore, the total consumption (units of electricity) for that period will be divided equally for each billing period or month (Confirming prorate basis or concessionary electricity tariff) when issuing bills. With that, the total electricity units consumed by the electricity consumer within a few months can be adjusted and separated for each month in a reasonable manner when preparing bills. In the meantime, some customers may have already received an estimated bill without proper reading of the meter.  If there is a difference between the units of electricity in the estimated bill and the number of units issued after reading the meter, that difference will be revised after the next bill is read. The consumer will be informed if there are such amendments.

4. Electricity connections will not be disconnected in the event of complaints regarding current or future bills that have been issued until the issuance of the bills properly on time. CEB and LECO will resolve such consumer complaints expeditiously. The consumer can also refer their problem to the PUCSL, in the event that the consumer does not agree with the solution provided regarding their electricity bill complaint.

When bills are issued for two months or more simultaneously, the total amount applicable for each month must be communicated to the electricity consumer separately in two bills.

As per the above example, the fee for the first month will be Rs. 280.50 and for the next month, the charges should be Rs. Rs. 280.50. The grace period to pay the bills will also be communicated to the consumer.

Electricity consumer who uses up to 60 units per month will be charged as displays the chart in an image at here when issuing electricity bills for two months at once.