Former president and current president has influenced investigations into the Easter attack, Here is the evidence for the Cardinal 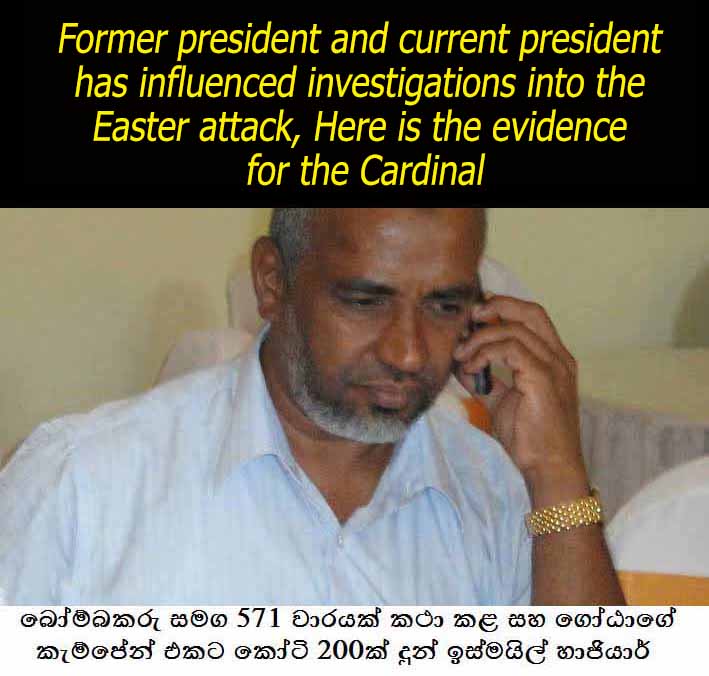 (Lanka-e-News -29.May.2020, 11.30PM) On the 22nd of this month Archbishop Cardinal Malcolm Ranjith said that a powerful person in the country is trying to weaken the investigation even though it seems that investigations are underway. However he did not say who the influencer was.

Seven suspects including Rishad Badiudeen's brother, Riyaj Badiudeen, were arrested last April in connection with the Easter day bombing. They were arrested on charges of having links with second suicide bomber at Hotel Shangri-La Mohammed Ibrahim Inshaf.

The only evidence available to the Criminal Investigation Department to justify the arrest of the suspects was the phone calls taken to Inshaf. There are no recorded audio tapes to know what was talked about, except the date and time of the phone conversation.

Strange but true, Ismail Hajiyar, who spoke to the suicide bomber 571 times, was arrested and released within four hours. He was released on an order from President Gotabhaya because Ismail Hajiar, a friend of Gotabaya gave Gotabhaya's presidential election campaign a sum of Rs. 2000 million.

Shantha Bandara, the then Public Relations officer of president Sirisena had spoken several times to the number of Inshaf who was killed. Sirisena's Telecom brother too has also spoken to Inshaf's number several times. It was Shantha Bandara who issued a letter to issue copper to Ishaf’s copper factory in wellampitiya.

Therefore one can complete Archbishops half statement he made that it was the former president and the current president whom have influenced the investigations of the Easter attack.