An analysis by Wimal Dheerasekera 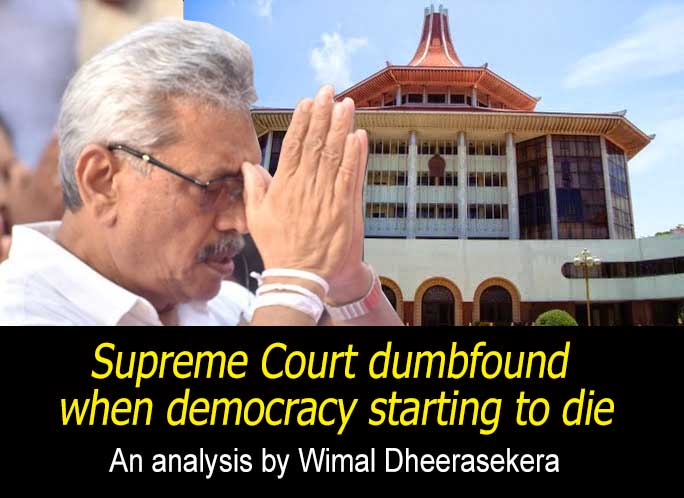 (Lanka-e-News- 4.June.2020, 10.45PM) The Fundamental Rights petitions filed in the Supreme Court for the holding of the general election on June 20th was dismissed day before yesterday (02), without a reason. The media reported in this regard was distorted. Therefore it is our duty to disclose the truth.

The Bench comprised with Justices Jayantha Jayasuriya, Buwaneka Aluvihare, Sisira de Abrew, Priyantha Jayawardena and Vijith Malalgoda. Before taking the petition for inquiry the petition was taken into consideration from the 20th of last month to determine facts from the stakeholders.

This is the first time the Supreme Court has taken so long to decide whether to hear a fundamental rights petition or not. Finally, the Bench decided that the petitions should be dismissed without hearing. It is particularly noteworthy that there is no excuse given for the dismissal. This is the first time a five-judge panel of the Supreme Court of Sri Lanka has rejected a fundamental rights petition without due process.

According to the media, these petitions were filed was to forbidden to hold elections. Such propaganda is a genuine distortion. The situation is as follows.

The true background of the crisis..

According to the powers vested to the President by the constitution, Gotabhaya dissolved the parliament on March 2nd. Accordingly, the Election Commission set an election date for a new parliament on April 25th. At the same time the Corona virus spread across the country. Since elections cannot be held on April 25th the Election Commission set June 20th as a new date for the election. However there was a violation of the constitution here. That is the country can be governed by a caretaker government only for three months when the parliament is dissolved. Article 70 (5) (a) of the Constitution requires that a new Parliament should be formed by that time. Accordingly, the three months from March 2nd will be completed by June 2nd that was yesterday. That is, on the date the Supreme Court ruling was issued. Even if the elections are held on June 20th the constitution will be violated.

It is not possible to govern a country without a parliament after June 2nd, except in violation of the constitution. There is only one provision. That is only under Section 70 (7) of the Constitution. The exception is included in the constitution to ensure democracy of the country in such an abnormal situation. Article 70 (7) states

If at any time after the dissolution of Parliament, the President is satisfied that an emergency has arisen of such a nature that an earlier meeting of Parliament is necessary, he may by Proclamation summon the Parliament which has been dissolved to meet on a date not less than three days from the date of such Proclamation and such Parliament shall stand dissolved upon the termination of the emergency or the conclusion of the General Election, whichever is earlier.

But this can only be implemented if the President is satisfied that an election cannot be held within the existing Corona plague. However the President publicly stated that he has no intention of recalling the old Parliament.

Accordingly, if a vote is held on or after June 2nd Article 70 (5) (a), of the constitution "The first meeting of Parliament shall be convened not later than three months after the dissolution of Parliament" would be violated.

What is the real crisis?

The president too has dissolved parliament constitutionally. The election could not be held on the due date, under reasonable circumstances. The Constitution too has provided provision for the President to summon the old Parliament as well as to dissolve it. That is, “if the president is satisfied” with the words or “if the president wishes” are those statements. But if the president continues to rule under a caretaker government after June 2nd not only the constitution be violated, but democracy too will start to perish.

The petitioners went to the Supreme Court to find a solution to this crisis and not to demand the postponement of the election as per the conventional media.

Was the crisis answered?

On the last day 2nd June the five bench of the Supreme Court, by refusing the petition without giving reasons, was a solution given to the crisis? No not at all

Does the Supreme Court have the right to behave confound when people seeking democracy go to the highest court in the country to find a solution in a crisis without a solution?   Will the people have faith in the law and justice of the country? It is compulsory for the Supreme Court to give reasons for its decision. Why a five bench panel of judges appointed? On the other hand it was the respondent who demanded a five bench panel of judges, not the petitioners. When Chief Justice Priyasad Dep was the chief justice he has given a verdict with reasons for a similar crisis in the provincial council election.

The reason not disclosed, is it because the truth cannot be stated? Is it because the true reason cannot be exposed, the five panel judge, including the Chief Justice, dismiss the petitions without giving an actual reason why the petitions were dismissed? If so, people will guess what the real reason is. Those assumptions cannot be suppressed. It cannot be mocked. It is undoubtedly more deadly to the well being of an independent judiciary than the Kovid virus.

Already such stories are emerging. Few days before the verdict, a retired army general who was a school friend of the Chief Justice reported the decision was "fixed". The lighting of firecrackers across the country following yesterday's ruling also indicates that some groups were already aware of the verdict. It is not healthy for an independent judiciary to allow such speculative stories to emerge.

The behavior of the panel of judges against the senior lawyer Chrismal Warnasuriya at the hearing of the petition would also give a helping hand for people to assume. Chrismal who appeared for a petitioner for a different reason requested an order to summon the parliament under Article 70 (7). His mouth was shut for giving contrary statement for his client. In a statement, Chrismal later said that this was the first time he experienced such in two decades of his legal career. These are facts that enable people to come to their own assumptions about the 'real reason' of not giving the verdict.

What happens when these petitions are rejected without cause? It is a judicial endorsement for the Executive to act in defiance of the Constitution (the Legislature). It is extremely dangerous to override one or two of the below three pillars (executive, legislature and judiciary) in which the sovereignty of the people of the country operates.

On the other hand, the five-member panel of judges committed a beheading of the legislature in which they had jurisdiction. The judiciary is vested with judicial powers by the legislature, or parliament. This is clearly stated in Article 4 (c) of the Constitution.

According to the statement, "the judicial power of the People shall be exercised by Parliament through courts" means, judicial power is exercised by the Parliament and not by the Executive. The five-member panel of judges has given the executive the opportunity to act without a parliament of its own. It is a choking of its own breath. This is, therefore, a rhetorical decision that could end in a more terrible tragedy than a comedy.

Learned lawyers, who justify the actions of the Supreme Court Bench. Some say this crisis should be resolved politically, not by the judiciary because Article 70 (7) clearly states "in accordance with the wishes of the President", they say there is nothing the courts can do.

However one goes to the courts demanding a Mandamus ordinance is to execute the discretion if the disclaimer does not execute. Since mandamus cannot be issued against the President, the petitioners should exercise their discretion to do so through fundamental rights petitions against the President's actions, as provided by the Constitution. The five panel of judge’s bench has dropped it.

The incumbent president has already publicly stated that he wants to have a trouble free parliament. Such a person would prefer to rule without a parliament. The Bayyo faction which raised him to power are vociferating that 225 members should leave. Maybe the president thinks he should listen to the voice of the people who made him the president. But he came to power not by a military coup but by a people's vote. Therefore the only hope what is left now is to wish the President to appoint a Parliament as soon as possible by popular vote. If that doesn't happen, democrats have no choice but to fight for it.