The dead body found at the independence square is a suicide or a homicide? 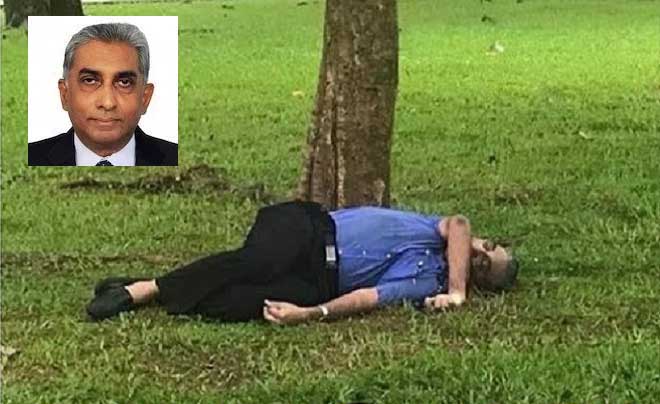 (Lanka-e-News- 12.June.2020, 10.30PM) The Cinnamon garden police claims, the body found with gunshot injuries at the independence square today 12th morning is a suicide. The deceased was identified as Rajeewa Jayaweera, a resident of Park Road Rajagiriya.

At the time when the body was found, a nine millimeter pistol was found underneath the body. At first glance it appeared to be a suicide, but it was suspicion as no vehicle nearby the body but the grass nearby the body was crushed. A doubt has been raised whether someone has killed him elsewhere and dumped the body. On the other hand, since the area is a high security zone, it is difficult for anyone play with pistol. It is also questionable Rajiv who was a writer had a pistol in his possession.

The deceased Rajeeva Jayaweera is the son of former public administrator Stanley Jayaweera and nephew of former administration official Neville Jayaweera. He was a former senior manager of Air Lanka. His wife lives abroad. Rajeewa is a writer of a pro Rajapaksa website which is under the defense intelligence pay scheme, which implies to operate from overseas but operates locally and a frequent contributor to the famous English newspaper the Island. He was pleased with the return of Gotabhaya Rajapakse, in a letter in April the latter said Gotabhaya Rajapaksa must be strengthened to overcome the Kovid-19 epidemic. He also stated that Gotabhaya could gain two third parliamentary power, if the country was liberating from the epidemic with fewer deaths.

It is doubtful whether Rajiva Jayaweera's death has been linked to articles he wrote exposing the corrupt deals. It is because of the inspirational stance he has for the present Rajapaksa governance.

The statement of the Cinnamon garden police..

The Cinnamon Gardens Police have revealed the deceased had sent a text message to his brother residing at Dehiwala around 8.30pm last night. The police exposed the latter has messaged the secret code of his personal briefcase and it contains a letter and to read the letter. The police reported the two-page letter, typed in English taken a computer print-out, stated that he had been diagnosed with a sickness that could be cured by surgery, but he would commit suicide without bothering others. The police stated the letter also stated about his will of properties to his children.

However, can a printed letter without his own handwriting can be taken as evidence of a person's suicide? An assassin can send text messages by snatching the victim’s phone. Why didn’t his brother get alerted about the text message he received last night? There are many unresolved doubts. Therefore, it is the responsibility of the police to reveal the truth without a doubt through a proper autopsy, is a suicide or a planned murder.