Sri Lanka And The US: A Pogrom And A Black Death At The Hands Of A White Policeman: Salutary Lessons 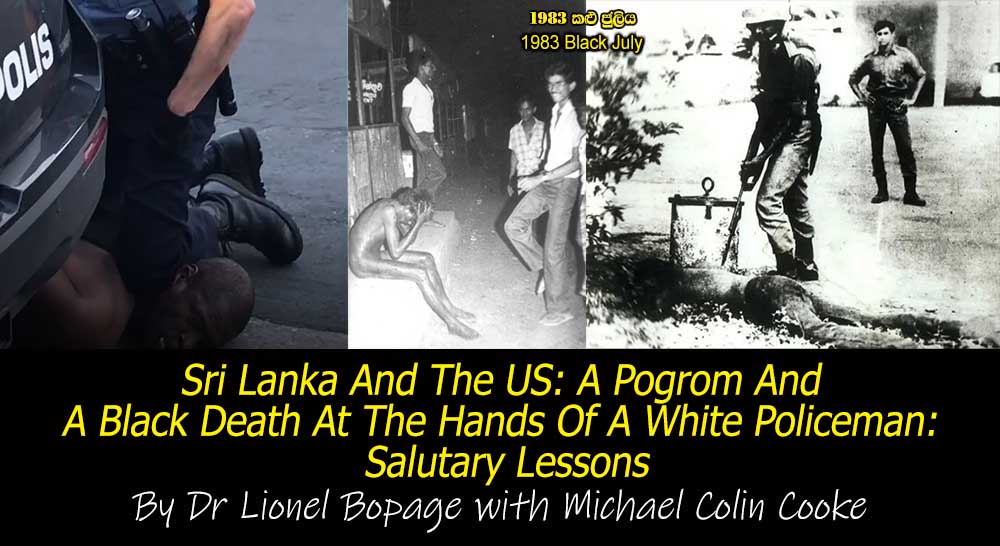 The morning of July the 25th 1983 is etched in my brain. I saw a group of people running or walking very fast away from the environs of Colombo. On enquiring I found they had shut up their shops and were escaping the riots that were taking place. Later in the day I saw the suburbs of Borella and Maradana ablaze. I witnessed mobs looting and burning properties belonging to Tamils and assaulting the inhabitants of those properties with impunity. Lorries and cars were being set ablaze and the passengers and drivers were being set upon. Many of the bystanders were gleefully applauding the activities of the frenzied mob.

I was saddened and shocked to see many of these thugs were enjoying their sadistic and murderous activities. I saw security personnel who instead of intervening were just bystanders to the carnage and barbarity taking place. Whilst driving along Kiribathgoda Mawaramandiya road, I was forced to stop by a mob roaming on a CTB depot service truck. They approached me shouting obscenities, brandishing swords and crowbars. I yelled back in Sinhalese asking them if they had gone mad. On hearing my fluency in the language, they left me alone.

Fast forward to May 25, 2020. In the city of Minneapolis, a black man arrested for allegedly passing a counterfeit $20 bill at a grocery store. His death at the hands of a white police officer was captured live, with his three colleagues looking on. George Floyd was handcuffed and was lying face down on the street. Floyd was completely compliant and pleaded for his life, said he could not breathe and called for his mother. Passers-by also pleaded to Derek Chauvin, the officer in question, to take his knee off the dying man’s neck, to no avail. Chauvin had his knee on Floyd even after the breath of his life had been extinguished. This was one of the latest in a long list of extra-judicial murders of black people, who are statistically more likely to be arrested, jailed and harassed by the police – reflecting a long history of discrimination against Afro-Americans since the advent of slavery in the 1600s to the present day.

There was no outcry within the country or internationally on the complicity of the J R Jayewardene government and the indifference and participation of the security forces in the Pogrom. The immediate result of this Black July pogrom was a full-blown civil war that lasted for over a quarter of a century.

Floyd’s murder brought together tens of thousands of people, black and white in hundreds of cities across the United States. Anger spread across the globe, including Colombo and especially in the mother of colonialism, the United Kingdom.

The government of the day in Sri Lanka in 1983, headed by the creator of the executive presidency, J R Jayewardene, and his coterie of senior ministers, blamed the victims for their plight and air-brushed away their nefarious role in the killings, lootings, rapes and the torching of properties, falsely accusing their political opponents, including me, who had no role in the Pogrom. The movement for democratic rights of the Tamil people had started off peacefully but was met by a series of riots and repressive measures state - sponsored. Further curtailment of their rights and pogrom scaled up their peaceful agitations into a full-blown civil war, that lasted 26 years. Meanwhile in the South the JVP was forced to go clandestine. It escalated the JVP’s political paranoia against the state and resuscitated and reinforced their politically futile and deadly insurrectionist tendency. This situation developed into an armed uprising which engulfed the south six years later, resulting in tens of thousands of illegal executions committed by both the state and the JVP; the great majority of those executions committed by the security forces, whose activities were subsequently rewarded.

In 2020, we have more of the same. A President who, instead of tackling the looming economic crisis and the corruption that permeates every layer of society (many belonging or related to the political class and some of the bureaucrats being alleged to be major beneficiaries), is busily deflecting attention. President Gotabaya Rajapaksa, like J R Jayewardene, is finding convenient scapegoats under the guise of nationalism: minorities, journalists, human right activists and the political formations that are critical of his activities. Like all authoritarian leaders, he is busily making himself less accountable by militarisation of the bureaucracy, securitification of society and sidelining the parliament.

The United States have a President Donald Trump, whose attention span is less than that of a gnat and who seemingly spends all his waking hours twittering his prejudices, when not watching Fox News and basking in the praise of his followers and those whose livelihoods depend on him. Meanwhile in the country he presides over, the number of those infected by COVID-19 and dying of it is the largest in the world. In his parallel universe, he is actually presiding over the most successful program against the pandemic. Inconvenient facts are blamed on his Democratic opponents, the World Health Organisation and China. So, it comes as no surprise that, just as in Sri Lanka, the victims of systematic racial abuse and police brutality are blamed, rather than the perpetrators of injustice.

There has been widespread condemnation of George Floyd’s death from all sides. Republican grandees like George Bush and Mitt Romney, Democratic representatives, Governors of many states, countless grassroots organisations – all have come together in an attempt to change the political debate on race. It is too soon to tell how it will play out, but the signs look good.

In Sri Lanka there is hardly any discussion about the 1983 pogrom, apart from a few brave individuals and community groups across the communal divide and some in the international community. The same is true of the two insurrections in the South and the long civil war mainly in the North and East. Nobody of the state apparatus has yet been brought to book for their crimes, and no compensation has been offered to victims. And the institutions involved - the security apparatus and the political establishment – have not been reformed.

After George Floyd’s death, the demand for equity and reform of policing methods became loud and clear. Numerous statues and monuments, honouring figures from the white majority community, associated with colonisation or slavery are being defaced or removed. Prominence was given to the right of minorities to be brought back from the margins of history, to the chagrin of supporters of the Confederacy and British Imperialism, and especially when the statues and legacy of Winston Churchill were called into question.

The ’83 pogrom and George Floyd’s murder offer us a sobering political lesson. The initial protest movement for the rights of the Tamils in Sri Lanka started off peacefully but resulted in a number of riots and a pogrom against the Tamil community, leading to a full-scale civil war. On the 9th of June a peaceful protest in Colombo held by the Frontline Socialist Party in support of the demands of fairness and equality of the black people in the US and to condemn the discriminatory policies implemented against them was brutally broken up by the police. This was done on the pretext that the protestors were not observing social distancing regulations. The participants and witnesses refute the “pretext” the regime has offered. This ruthless action of the Gotabaya Rajapaksa regime is nothing but an expression of sympathy towards the discriminatory policies of the Trump presidency and past US regimes in their treatment of minorities.

In the United States, many in the white community have come out in support of their black comrades. Nothing equivalent has happened in the majority community in Sri Lanka. In the US, more racist elements amongst the whites have been emboldened, with a resurgence of neo-Nazi groups and the Ku Klux Clan. In Sri Lanka also, we can see similar social media and mainstream media manipulations by militant Sinhala ultra nationalist groups. They continue to slander the Muslim community, helped by the complicity or indifference of the authorities, with tragic consequences to the social cohesion and national unity of Sri Lanka.

Progressive people around the world have become aware that not to protest has ethical and political consequences. George Floyd is serving as a catalyst to question racism, slavery and colonialism. We should remember not only Floyd’s needless death but also the lessons from Sri Lanka’s own blood-stained past. We hope it can also serve as a political trigger for the masses to question the scapegoating of minorities and the persecution of the government’s opponents, journalists, civil society actors, human rights activists and the Trade Union Movement. We can do no less.