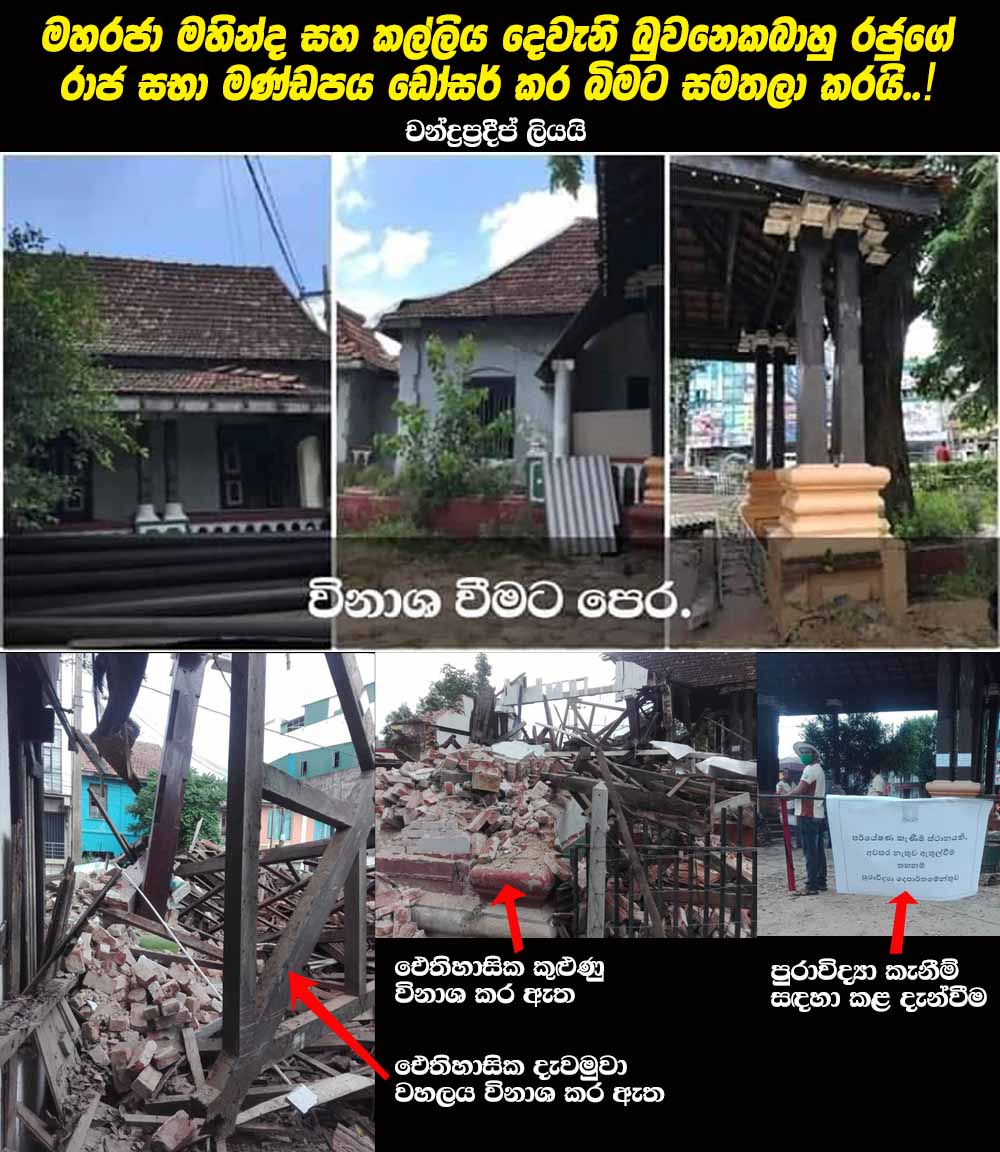 Why Mahinda is responsible directly?

The root of the criminal..

The crime was committed by Thushara Sanjeewa Vitharana, the Mayor of Kurunegala, the right hand man of Minister Johnston Fernando, the district leader of Prime Minister Mahinda Rajapaksa. He is a former remand prisoner for a still pending charge of extorting money for threatening a person with a firearm. He is an incompetent man who initially drove three-wheelers and then extorted money from three-wheel drivers. Later, he joined hands with Johnston Fernando, a political bully in the province, and become the mayor of Kurunegala in the last local government election.

The root of the crime..

The 700-year-old wooden house of King Bhuvanekabahu II's royal court was located in Kurunegala. Following King Bhuvanekabahu II, the original building was time to time renovated by the kings and it was still in good condition. According to Sri Lankan law, every building built before 1815 and every building more than 100 years old was gazetted by the Minister of Culture as antiquities. That is to say, this building was also a building which must come under the supervision of the Department of Archeology.

However the owner of this building was the Kurunegala Municipal Council. It was run as a hotel that provided accommodation and food for the people. Prior to the arrival of the current mayor, the city council had been calling this building for tenders every year and leased out to private entrepreneurs and the rent was taken by the municipal council. Finally it was run by a businessman named Chandare.

When Thushara Sanjeewa became the mayor of Kurunegala he has said Chandra to pay a ransom of Rs. 20 million in order to continue the hotel. When Chandare refused to pay such an amount as he was not making such a profit, Thushara chased him and took over the historical building again to the municipal council and the latter was running a business till now.

Archaeological excavations of the building were scheduled to take place last Wednesday 15th from the Archaeological Department for an inspection. On Tuesday night the culprit Thushara Saneewa after everyone had fall sleep has dozed the historical archeological structure to the ground in order to build a hotel.

How can the criminal be free?

Following the media coverage of the incident, the mayor has stated various reasons. He told the media yesterday 16th that the building was bulldozed as the Urban Development Authority had urged the municipal council to demolish the building to widen the nearby road. Yesterday 17th he said that the Road Development Authority urged him to bulldozed the building to widen it. If one probes who is behind these two institutions, can reveal who is behind this mayor.

Today, the Urban Development Authority belongs to Prime Minister Mahinda Rajapaksa. The Road Development Authority belongs to Johnston Fernando but both are silent. Moreover, the real owner of the site, Commissioner of Archeology Senarath Dissanayake, who should take immediate action regarding the crime, is also silent. (A separate article about Senarath Dissanayake will be published in e News) The OIC of the Kurunegala Police and the DIG of the police in charge has switched off their phones and remains silent. The set of 'patriotic' nuts with saffron robes who vociferated in the recent past is also silent. Perpetrator Thushara Sanjeewa who has committed an irreparable national crime is living with impunity.

According to the laws of Sri Lanka (as well as the Penal Code as well as the Public Property and Archaeological Ordinance) it is not a matter of bulldozing a place of archaeological value, but simply damaging such a place is a punishable offence with a fine and imprisonment for up to five years. Thushara Sanjeewa Vitharana, the cynic who committed such a crime, has not been arrested yet and not even questioned by the police. It is said that Mahinda Rajapaksa has appointed a committee to investigate the incident to escape public pressure. Apart from enforcing the law in the case of a direct crime, the appointment of committees to cover up also falls under the offense
of aiding and abetting a crime.

Now is the time for President Gotabhaya Rajapakse, who came to power with the consent of the 6.9 million people claiming that he is literally enforcing the law of the land and claiming to be the hero who protects the country, to show in action, not by various assurances, "I am not an American, I am a Sri Lankan but by literally enforcing the law against the cynics who bulldozed this valuable archeological monument marking the culture of human history in Sri Lanka, which has preserved the country's kings and people intact for 700 years. Gotabhaya must decide whether to sacrifice the heroic medals he loves to embed in his chest for an ignorant extortionist of a city council. If not, Gotabhaya will be taken care of by real men and women who love the country and the Sri Lankan nation.