Break the Vicious Cycle: Do Not Vote for Repression..! 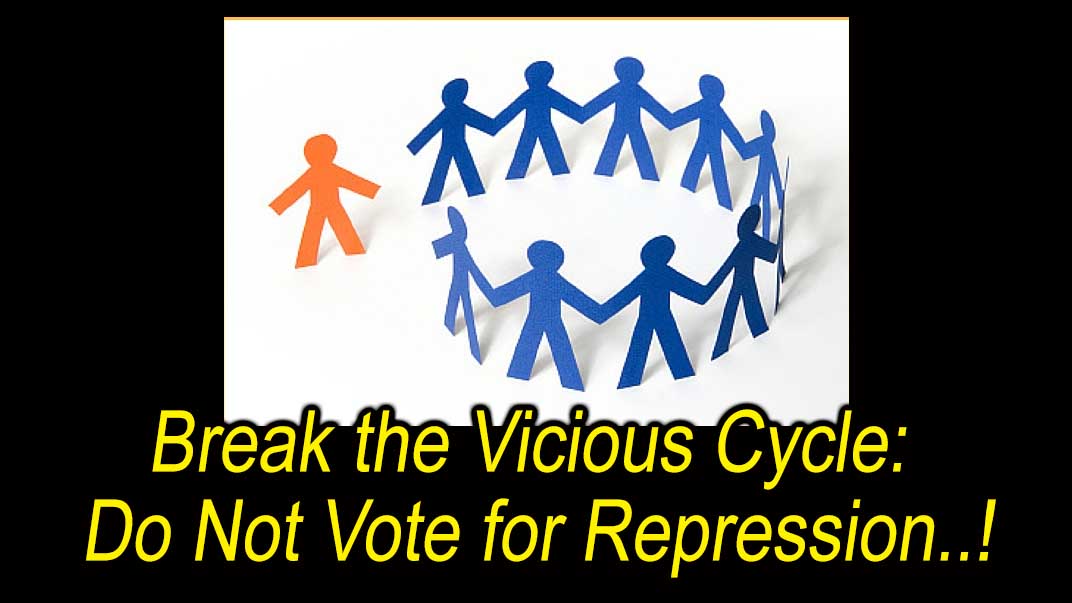 (Lanka-e-News- 03.Aug.2020, 11.20PM) Since independence in 1948, all Sri Lankan governments have presided over ever-increasing corrupt practices, failing to deliver a vibrant economy or a fair and just society. They have failed to improve the standard of living of the masses. It is worth remembering that during this period, three rebellions were launched by the youth of the country against the irrational mode of governance and they were brutally crushed. The dismal results are there for us to see - an increasingly disempowered society, fragmented by narrow and selfish nationalistic interests.

Governments in Sri Lanka have employed diverse repressive strategies against their political enemies and the general public when they proactively agitate for their rights to survive as human beings, or when they reactively rise up against the curtailment of such rights. The global experience shows that when such oppressive regimes or their accomplices acquire or are ‘elected’ to power - chances for justice, democracy, human rights and economic opportunities are diminished except for a select few. In power all they do is to corrupt the judicial and parliamentary process by obfuscation, ignoring their legislative responsibilities, and introduce repressive legislative and constitutional amendments, which disillusion the electorate who then elect the next lot in. This is unacceptable and we need to break this vicious cycle.

Such regimes strengthen their domestic electoral and repressive positions by becoming apologists for and minions of authoritarian led countries of various hues, by supporting their transnational corporations, directly or indirectly, and by receiving military assistance and trainings from them. Clearly the Philippines, Saudi Arabia and the Congo provide ample evidence for such autocratic, extremist, and fascistic regimes. Last week in Sri Lanka, several main campaigners of the Rajapaksa team openly declared that they would like to get two thirds majority at the general elections on August 5 and make Sri Lanka an authoritarian state! The new normal would be a president for life, making ministerial appointments bypassing parliament, and herald in an administration run by a cohort of ex-military personnel, thus make parliament a mere talk shop. In fact, Sri Lanka has already gone some way ahead in this regard.

The Australian government is also exposed on similar fronts like corruption, human rights violations and enaction of repressive legislation. And it continues to support corrupt and extreme right-wing governments all over the world. Australia has been reported to have covertly exporting arms to war-ravaged countries. It is alleged to have issued more than 80 weapons export permits to Sri Lanka, the United Arab Emirates and Saudi Arabia. Australia has exported a range of military hardware to the Philippines - the Filipino regime of Duterte is said to be responsible for the deaths of more than ten thousand people in their ‘war on drugs' campaign. One common theme that characterizes such repressive regimes is the existence of rulers and officers reliably accused of war crimes and crimes against humanity at the commanding levels of their security establishments. And Sri Lanka is exemplary in this regard.

Locally, discrimination based on every socio-economic and political division, and repression of opposition by intimidation, incarceration, torture, killings, forced disappearances and massacres, will become more common place with the attendant evils - lack of transparency, corruption, legal immunity, amongst others. Internationally, foreign interference in the internal affairs on a selective basis will intensify, with corruption reaching higher levels. Resources that belong to the people will be sold off to overseas transnationals who would profit from our indebted economy and vulnerable situation.

The lack of the rule of law in the country is a result of not applying the law equally to all citizens. While law is enforced against the powerless and minority communities in a discriminatory manner, the regime turns a blind eye to some belonging to the majority community and faith - sometimes threatening and abusing the officers who enforce the law. By suspending, transferring, punishing, sacking and arresting officers who have done their duty according to the law, the regime has provided incentives and moral support to those wanting to continue to force the skewed application of the rule of law.

If re-elected, the Government devoid of consultative policy frameworks, will continue to function without a pragmatic vision for the future. Lack of leadership in guiding the country forward will destabilise the rule of law even further, while erosion of democratic rights will continue. Human rights abuses will be the new norm. Those battling for democracy and social justice will be branded enemies of people. They could even be subject to death and disappearance, if we believe what the present Defence Secretary once stated in public. Legislations will be introduced and strengthened to serve a few, while leaving many in abject poverty without a secure roof over their head. People on insecure employment, the underpaid and the overworked, will increase.

Social justice and economic equality are essential for social progress and cannot be realised without challenging the existing inequalities of power and wealth. Only the involvement of the whole of society with a bottom-up engagement will address the prevailing issues that hinder social cohesion and equity. Then only the opportunity will arise to creating a rule-based society that will value individual life and treat everyone with dignity and respect. Inequalities can only be overcome by empowering people and ensuring that all will have a guaranteed minimum standard of living, well-being, and an equal opportunity to develop their full potential.

There are maestros in deception scheming, wizards in misinformation, fake guardians, masterminds, and irrational fear mongers. They make use of the ignorance of the people to deceive them to follow the same old route. We need to cast our vote to get rid of those who lead such campaigns and those who support them. Similarly, we need to identify those candidates who are vulnerable and could be forced to become minions when cowed by their leaders to follow their parties into unacceptable coalitions and undemocratic and corrupt practices. We should not elect such spineless people as our representatives. And only we, the people, can apply pressure against the misleading diversions, and corrupt and anti-democratic measures.

More importantly, a fair, just, and prosperous Sri Lanka cannot be achieved by electing authoritarians to power. No one can expect things to change by voting for those with a track record of deceit and corruption. They wish to continue the same old way with the existing system unchanged. Our youth deserve better, and their future must be brighter and fairer. We must, therefore, fairly and squarely reject the dishonest and corrupt candidates.
Those who are concerned about the erosion of democracy and the worsening economic and inter-communal situation have the chance to cast their votes on August 5 to say enough is enough. Time has come to stand up, speak out, and speak up with your VOTE.

At local level, you would know the candidates who have good character and known for serving the people in the area. Those who are not corrupt, not committed human rights violations, and not taken part in any criminal activities against people; those who have stood by people and their just demands regardless of their ethnicity or religious background; candidates capable of developing policies working consensually, offering alternative ways of involving in healthy political discourse. Elect them as your representatives.

We need to have the courage and determination to undertake this important task. This is long overdue, and we need to change so that a decent and fairer society can emerge from this and coming generations. Identify good parties and groups that comprise candidates who have political backbone to stand up for just principles and say enough is enough.

So, please go to the polls and cast your votes for such people and their parties at the earliest possible time on the election day. That way, you will avoid someone else casting your vote to elect somebody whom you would not want to be your representative.

It is time to exercise that precious right once again - wisely, responsibly and proudly. Your vote matters.