Shani Abeysekere imprisoned but Ravi Waidyalankara out; The future of Sri Lanka police which destroy their own officers..! 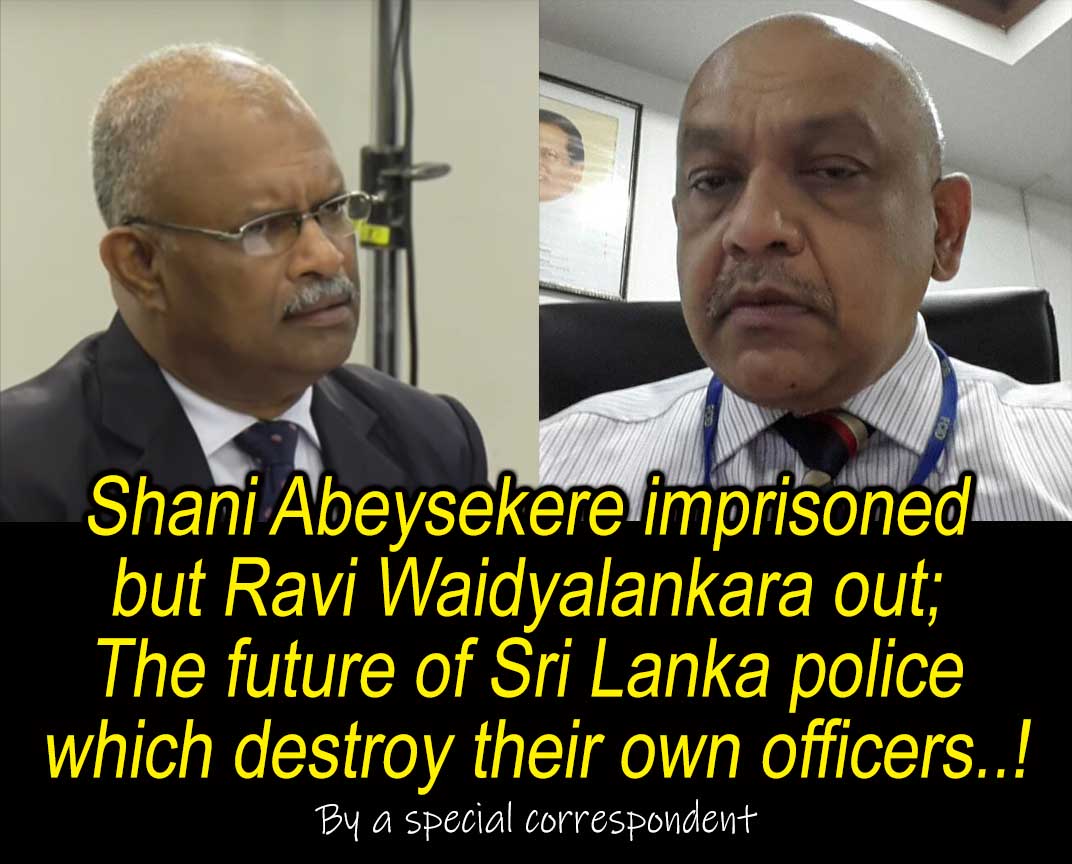 (Lanka-e-News- 04.Aug.2020, 3.40PM) Former Director of the CID Shani Abeysekera has been remanded. It is based on an allegation that the evidence in a case proved in 2013 was fabricated. It is said that several CID officers have also given evidence in this regard.

If this is the case, what will happen to the cases filed by the CID so far and the cases in which the accused have been convicted? If the police officers prosecuting convicted criminals are jailed after many years, who would prosecute the criminals connected for crimes in the future? This has happened to the former director of the CID, who has a distinguished history of handling criminal cases in Sri Lanka.

Shani Abeysekera is an efficient police officer who successfully investigated Chandrika Bandaranaike assassination attempt, Sarath Fonseka assassination attempt, Angulana assassination, Royal Park assassination, Bharatha Lakshman Premachandra assassination and prosecuted criminals before the judiciary. Shani Abeysekera is one of the outstanding crime detective in the CID, became its director and led a series of investigations into many mysterious deaths of Wasim Thajudeen, the disappearance of Prageeth Eknaligoda, the assassination of journalist Lasantha Wickrematunge, the abduction and killing of 11 Tamil youths led by the Navy, the killing of the Welikada prison inmates and the abduction of journalist Keith Noyar at Welikada Prison. What is special is that all these crimes are many years old involving politicians in various ways. These are very difficult obstacles faced by police investigators. The statement 'number of enemies to a police officer is a mirror of his commitment and skill' is absolutely true to an officer like Shani Abeysekara. His sharp investigations had made him to make a number of politically and economically powerful enemies. He arrested former DIG Anura Senanayake, Lalith Jayasinghe, Vass Gunawardena, Prasanna Nanayakkara, former Chief of Defense Staff Ravindra Wijegunawardena and MP Duminda Silva. Hundreds of drug dealers, racketeers and underworld criminals are among them. In fact, his investigations posed serious threats to Gotabhaya Rajapaksa, Namal Rajapaksa and Yoshitha Rajapaksa. It is also worth stating that Shani Abeysekera 's CID at the time was able to arrest all the suspects in the Easter attack in as little as a month and uncover the network.

How did Prasanna become the director of the CID who hid evidence?

What is the status of the CID providing witnesses to the Colombo Crimes Division against Shani Abeysekara today? As soon as the current government came to power Shani Abeysekera was appointed as the DIG's personal assistant in Galle and was replaced by SSP Tilakaratne stating that it was due to the need for duty. The need for this officer, who was promoted on special cabinet decisions made by Mahinda Rajapaksa, who had no training or experience in criminal investigations, to be the director of CID, was not a problem for the Independent Police Commission either. However, Tilakaratne soon left the CID and went to the Ministerial Security Division, reluctantly realizing that whatever the director of the CID, he could not stay there without the knowledge of investigations. Following that, its director was Prasanna Alwis. He was promoted from ASP to SSP as soon as the present government came to power. The promotion message stated that it was based on a Supreme Court decision, but in fact the Supreme Court case had ended in 2014 with the withdrawal of that case. The case was filed in 2008 by Prasanna Alwis, Mano Ranagala and Anuruddha Bandaranaike. They were promoted to the rank of SSP in 2020 based on a withdrawal case. However, about 50 SSPs have so far filed a fundamental rights case in the Supreme Court against those promotions. Tragically, Shani Abeysekera had reported to the Mount Lavinia Magistrate's Court that Prasanna Alwis had concealed evidence of the Lasantha Wickrematunge murder investigation while he was the OIC of the Terrorism Investigation Unit at the time. Ahimsa Wickrematunge, daughter of Lasantha Wickrematunge, has also lodged a complaint with the Independent Police Commission against the appointment of Prasanna Alwis as the Director of the CID

An investigation against Prasanna has also been conducted under FCID Investigation 13/2017, which has become a unit of the CID in order to dilute the FCID investigation against Prasanna. The complaint has been lodged by the suspended DIG Nalaka Silva. According to the allegation, Prasanna Alwis, the then OIC of the Terrorism Investigation Division, had carried out an investigation into the money of the LTTE which was in custody of a person named Narendra Ratnasabhapathi in 2011. He had credited a sum of US $ 400,000 which was in their custody to the government, but no action has been taken against him for another $ 1.4 million possessed by him. It has been reported to the court that no legal action should be taken against Rathnasabhapathi on the instructions of Suhada Gamlath attached to the Attorney General's Department. Nalaka Silva has complained that the original file pertaining to this is not in the Terrorism Investigation Division. However, it is strange that suddenly Ravi Vaidyalankara was appointed to inquire into this complaint. Ravi Waidyalankara who made this a biggest scam sent an incomplete investigation report to the attorney general. The most important but what was not done in that investigation was to not investigating the US $ 1.4 million had with Rathnasabapathi. Another important point to note is that the current Director of State Intelligence, Suresh Saley, was also involved in the investigation and the latter had gone abroad with Prasanna Alwis for this investigation. The matter has been reported to the Fort Magistrate's Court under 6683/2017.

The law applied to Shani Abeysekara has not yet been implemented to Ravi Vaidyalankara. The Bribery Commission, the CID and the FCID did nothing to investigate Ravi Waidyalankara. Meantime a company named Soorya International was formed between Punya Priyanthi Menike the wife of Rienzy Edward who was alleged for a financial crime in the US and the wife of Ravi Waidyalankara Mary Basilica at a house situated at Monach residency owned by Talos Management Consultant. The owner of the house was Asela Vaidyalankara, the son of Ravi Vaidyalankara, who had bought this house for Rs. 52 million. He stated that the way he found the money to buy the house was to export gems obtained from a gem merchant which could not be found until now for a higher price. Mary Basilica had stated that she was not aware of the activities of the Soorya Company but she came to know Poonya Menike at a salon and signed some papers. However this is yet another fairy tale for Ravi Waidyalankara who was inspired by Daisy grandmothers gem stories. Son Asela Waidyalankara does not know that his mother is a director of a company and he doesn’t know his house address is used for a company address. What is amazing of this story is that the father does not know any of this.

Recently Sajin Vaas Gunawardena revealed another fraudulent transaction of Ravi Vaidyalankara. The matter has been reported in the Kaduwela Magistrate's Court under 9823/15. Ravi Vaidyalankara has flown to Singapore to take an affidavit from Chidambaram Subbu of from a company named TPL-Inter, which has sent money to Yoshitha Rajapaksa's CSN and Nimal Perera. Subbu claims that he received US $ 5 million from a company called Haliard, a subsidiary of Shangri-la, and a part of it was sent on the instructions of Namal Rajapaksa. However the FCID has not been able to obtain a statement from Chidambaram Subbu until now. Meantime such an affidavit cannot be used in a local court case. The Attorney General has no problem with the law under which how someone can go to Singapore and obtain an affidavit from a citizen of that country. The problem is that still the people are not clear why a company affiliated with Shangri-La pays US $ 5 million to a company run by Namal.

The future of the police which destroy its own officers..

Shani Abeysekara has been imprisoned. What would happen to the investigation conducted by Shani and his team would be cleared when the Defense Secretary appointing a military team to oversee the investigations. FCID officials who investigated money laundering are nowhere to find. From the commission appointed to investigate the easter day attack revealed how the Ampara SSP and other officers who were investigating the Easter attack was transferred. The Ampara SSP who was transferred to the Colombo South Division has been transferred back to Moneragala. The Colombo South Division, which is usually staffed by a senior officer, has been handed over to a Superintendent of Police. It is not surprising that Senior DIG Deshabandu, who has the least seniority, should lead the Western Province which should be operated by a senior officer. What is wondering here is what would be the future of the police destroying their own officers and what the future holds in a lawless country.