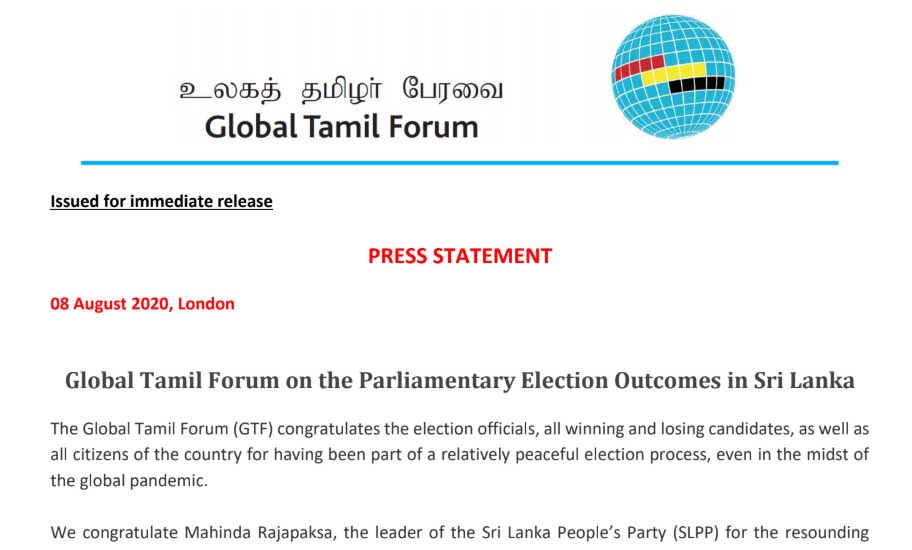 (Lanka-e-News -08.Aug.2020, 3.45PM) The Global Tamil Forum (GTF) congratulates the election officials, all winning and losing candidates, as well as all citizens of the country for having been part of a relatively peaceful election process, even in the midst of the global pandemic.

We congratulate Mahinda Rajapaksa, the leader of the Sri Lanka People’s Party (SLPP) for the resounding victory at this election. Mahinda is a highly experienced politician with immense popularity among the Sinhala Buddhist constituents, and he is uniquely placed to address some of the fundamental problems that afflicted this country for decades, including addressing the apprehensions and aspirations of the Tamil and other minority communities. Mahinda Rajapaksa’s rule in the past have often been characterised by an unbridled sense of triumphalism, but presently at the peak of his power and stature, there is a golden opportunity to imprint ‘generosity towards all citizens’ as his enduring mark on the country.

Eleven years after the end of the war, the Tamil political landscape is changing. Tamil National Alliance’s (TNA) Parliamentary representation has reduced to 10 from the 16 it had won in 2015, though it unquestionably remains the predominant political party that represents Tamil national interests throughout the Northern and Eastern provinces.

Clearly TNA’s power has eroded on two fronts – TNA could not deliver on the expectation of the electorate despite participating fully in the system of Governance dominated by the Southern parties, both with regards to the aspirations of the Tamils for autonomy as well as their need for economic upliftment. The effect of imposed demographic changes on the electoral outcomes, and the differences on the political dynamics between the Northern and Eastern Provinces are also becoming more apparent.

These are serious challenges to the political parties that base Tamil communities’ political aspirations as their defining identity. While it is important that they do all that is possible to collaborate among them (perhaps as a single block) and also engage with other political parties in the new Parliament to protect and foster Tamil interests, it is crucial that Tamil parties strive to articulate a long term vision and action plan that should comprehensively address Tamil peoples political, economic, educational and cultural aspirations in a principled and pragmatic manner.

This is perhaps the most important takeaway from this election for all Tamil parties. Not properly heeding to this powerful message the election has eloquently conveyed could lead to decay and decimation of Tamil nationalistic politics in Sri Lanka.

GTF congratulates newly elected MPs Mr. Gajendrakumar Ponnambalam and Mr. C.V. Vigneswaran who have been ardent champions of Tamil cause and to TNA which remains the leading Tamil political party for the Tamils with Mr. Sampanthan at its helm. We also welcome TNA spokesperson Mr. M.A. Sumanthiran’s acknowledgement of the electoral setback and their preparedness to address the causes expeditiously, and his call for all Tamil parties to work together in the larger interests of Tamil people.

On our part, GTF would like to reiterate its commitment to work with all elected Parliamentarians and other relevant stakeholders to achieve equality, justice, peace, respect and prosperity for all.