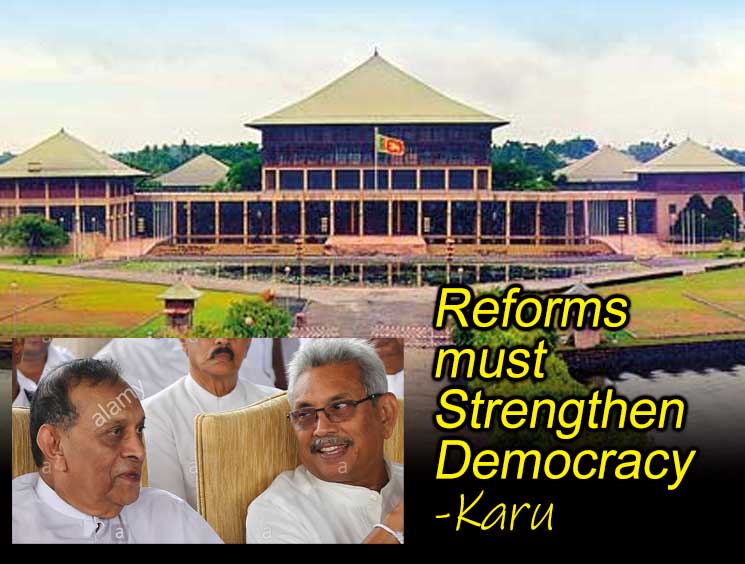 (Lanka-e-News- 23.Aug.2020, 11.30PM) It is my pleasure to send good wishes to the 9th Parliament that was declared open yesterday (August 20th). The new Parliament embodies the strong mandate given to the government. It is also welcome that more than a third of the Parliamentarians are first-time members, reflecting the people’s wish for a fresh start.

The observations made here in good faith are based on the 2/3 mandate sought and received by the Government at the Parliamentary elections held this month.

As person who has dedicated the whole political career to the cause of strengthening Sri Lanka’s democracy, I would like to draw the attention of H.E. President Gotabhaya Rajapaksa, Hon. Prime Minister Mahinda Rajapaksa and the government to the need to protect and enhance the essence of democracy embedded in the 19th Amendment.

The 17th amendment was born as a result of the public outcry during the famous Wayamba Elections where several malpractices, killings, arson and harassment took place.  Members of the clergy of all faiths, academics and members of the opposition, civil society and professionals voluntarily formed in to a ‘citizens committee’ that drafted the first document. The committee was chaired by me when I served as the Mayor of Colombo.  The JVP agreed to support the then PA/SLFP government on the basis that 17th Amendment was introduced.  Although independent commissions were formed the Elections Commission did not function due to the disagreement with regard to the Chair.  Then President was not agreeable to appoint the suggested name.  The Elections Commission was established in 2015.

As envisioned by Most Venerable Maduluwawe Sobitha thero, the 19th Amendment could build on that and strengthened the Parliament, reduced excessive powers accumulated in Presidency, re-introduced independent commission to ensure that critical institutes of the country such as public service, judiciary, electoral system, human rights and Police etc. are protected from political influence. It also introduced the Constitutional Council, with the membership of the government, Opposition, and the civil society to have a process by which appointments to important positions and independent commissions are made with a national consensus.

In the spirit of the 19th Amendment, it is welcoming to note that the President appointed 26 Ministers to the Cabinet, thereby following the 30-member limit introduced under 19A. Further, the Right to Information act, which is considered as one of the best in the world, has been integrated into the 19A, by way of recognizing Right to Information as a fundamental right. This is the only improvement to the fundamental rights introduced under the 1978 constitution.

These reforms have been enacted after wide consultation and negotiation within the Parliament and the civil society. In fact, the majority of the approving votes came from the UPFA members, led by President Maithripala Sirisena in 2015. Besides, even the present Parliament consists of a majority of members who have voted for the 19th Amendment.

In this situation, if the government abolishes the 19th Amendment, and a new Constitution is passed, that must be done after wide consultation with all stakeholders, including all political parties, citizens’ organizations, and eminent individuals and general public.

Democracy is a much-valued legacy of Sri Lanka and people treasure the freedoms they have. 19th Amendment symbolizes this democratic spirit. I request H.E. President Gotabhaya Rajapaksa and Hon. Prime Minister Mahinda Rajapaksa to undertake to properly analyze and evaluate any technical shortcomings of the 19th Amendment while respecting and upholding the essence of the 19th Amendment to the Constitution in future reforms. As the proverb goes, one should not ‘throw the baby away with the bath water’. As such, respect for democracy and rule of law is mandatory for us to rise as a proud nation in the world.

As a responsible and concerned citizen, I wish good luck to the new government and the proposed constitution-making process, with the sincere hope that it will strengthen Sri Lanka’s democracy and provide an inclusive platform for the country to achieve prosperity for all.