A country without a defense Minister..! -Dr. Nihal Jayawickrama 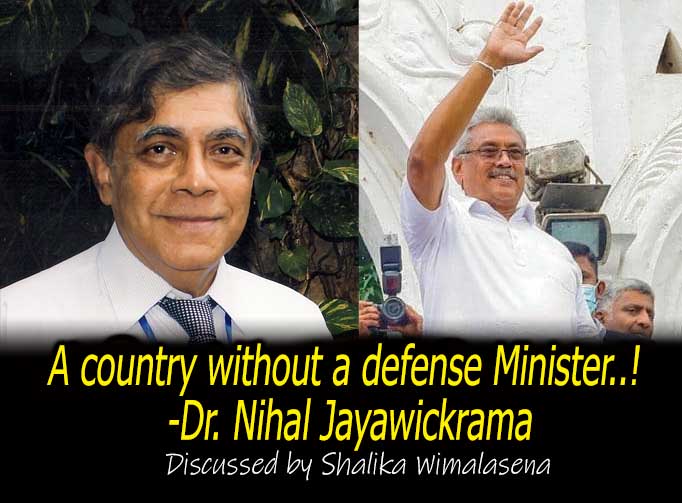 (Lanka-e-News -27.Aug.2020, 9.45PM) Once again there is no Defense Minister in the country. During and after the appointment of the Cabinet, the official government media reported that the defense ministry would be held by the President. But the gazette notification issued later did not say so. The gazette notification is the final document be officially accepted. Is the defense minister post so unreliable? Or is there another psychological problem?

This is a conversation I had with Dr. Nihal Jayawickrema, a renowned constitutional scholar.

1.      One of the issues that arose with the swearing of the Cabinet was that it was unconstitutional to keep the post of Defense Minister under the President. Is that true?

When the cabinet was appointed there was a discussion about this. However in a weekend English newspaper there was a description about the gazette notification on ministers and subjects.

According to that there is no Defense Minister at present. Although originally it was like that but now the new situation is also the same. Whatever was said at the time of appointment, it is the Gazette what we have to accept because that is the official document. I looked into it. That report is correct. It was like that when this government came in November. There was no defense minister.

2.      What does the constitution say, Can you explain that?

3.      A news websites reported that the President could hold ministerial posts on the recommendation of the Prime Minister or in such a situation?

No. That cannot be done. According to the constitution, the President can decide what ministries are and how they are divided. That can be done in consultation with the Prime Minister or it can be done alone. Once that is done, ministers can be appointed only from among the Members of Parliament. Not anybody else.

4.      However, a group of lawyers had said, there is room for that under Article 4 of the Constitution?

What is being pointed out here is the fact that the President has the executive power of the people in Article 4 of the Constitution. It is clear that all three security forces are included. However what we need to understand here is that the defense force is formed to save the country. This is a situation like a war, under the influence of another country.  The president has the power to declare war or peace. That's right. But being a minister is different. A minister has to go and sit in Parliament. He must be accountable; he has to answer questions raised by the opposition. The President has been given security powers in another way. For example, the President has the power to impose a state of emergency under the Public Security Act. It does not need anyone's advice. Bearing a ministry is another responsibility.

Such a situation has been created constitutionally in democratic countries. For example, the Queen of England is Commander-in-Chief or the Commander of all armed forces. It will not be given to military or military leaders.  That is an accepted norm. It is the same is in Sri Lanka.

6.      As you say, keeping a ministerial post as well as a state institution under the President is a problem.

For example, if the Telecommunications Regulatory Commission raises an issue in Parliament, if there a situation there is no one to answer in the parliament.

Even during the presidency of Maithripala Sirisena it was in the office of the President. It was the same before. Parliament should allocate money for these institutions. That power is vested only to the parliament. Only a ministry can allocate money from Parliament. It is the Ministry that distributes funds to the institutions under it. That's not correct. I remember during the last government, Harin Fernando had told the media that he had no institution. The Telecom was under the then President's brother. The President had taken over the Telecommunications Regulatory Commission. This is an unacceptable situation. However, the President has the ability to remove these obstacles through techniques such as establishing a new ministry. It
is not possible to run an institution alone. There should be a ministry secretary responsible for that. The Public Finance Committee should be responsible. Any government institution should fall into a ministry.

7.      Can’t a head of the relevant institution like the Chairman or the Director General. Can't he or she bear this responsibility?

It cannot be done. According to the Constitution, all state institutions should be placed under a Ministry. That is the administrative structure. The chairman cannot do that. A minister in parliament should have these institutions. If not the President can go to Parliament to answer those questions. All Members of Parliament can say at any time that I have to ask these questions from the Minister of Defense. Then the President has to go to Parliament to answer it.

8.      What about appointing state ministers, Are those techniques not successful ?

Yes, it is a technique. There is no such thing as a state minister. It has been said that it is a non-cabinet minister. They can be empowered. It can be done by the Cabinet Minister in charge of the relevant subject as well as the President. I think it's well done this time. Although there is no cinnamon and turmeric there is a Minister in Parliament who is responsible for those commodities.

9.      There is a discussion regarding the abolition of the 19th amendment to the constitution. Matters relevant to this have also taken place at the Cabinet meeting. What is your opinion about the abolition of this amendment which is widely discussed in the society today?

Now there is no such notion as the 19th Amendment. An amendment was brought to the constitution and it is in the constitution now. If you wish to change, you can bring another amendment and change it. Then there will be no discussion of 19th, it would be a change in the constitution. We do not yet know exactly what they will amend in the current situation. That's why it's hard to predict anything now. It would be good if some things change that way. For example, the number of members of the Election Commission is three. The forum is also three. Those need to change. See the constitutional council. It is an endorsement or rejection to a name sent by the President. That is not correct. Members may not even know who this appointee is. At least there is no methodology to select the appointed person. There are many issues in the form of function of this.

10.     However, the empowerment of these independent commissions is a better situation. Despite shortcomings, a situation where they do not exist would be more problematic, wouldn't it?

My personal opinion is that this government will not go for such a decision. It would be more disadvantageous for them than politically. Independent commissions are a good sign to show that the government is more democratic.

11.     Making a change in the constitution is a bit complicated. Although nothing happened, we have seen in the recent past that public opinion is being called for a new constitution. Are those mandatory...?

No, the government can do that. During the tenure of JR Jayewardene the constitution was changed 16 times by simply bringing a bill. The government has that power. It should be published in the Gazette. If there is a problem anyone can go to the court. There is no need to consult the public. If the government does that it will be a better situation. My view is that if a new constitution is to be drafted, it should be done by getting the views of the people. However, the government has the opportunity to do this by a two-thirds majority in Parliament except in a few crucial cases.

A letter from Lanka Newspaper