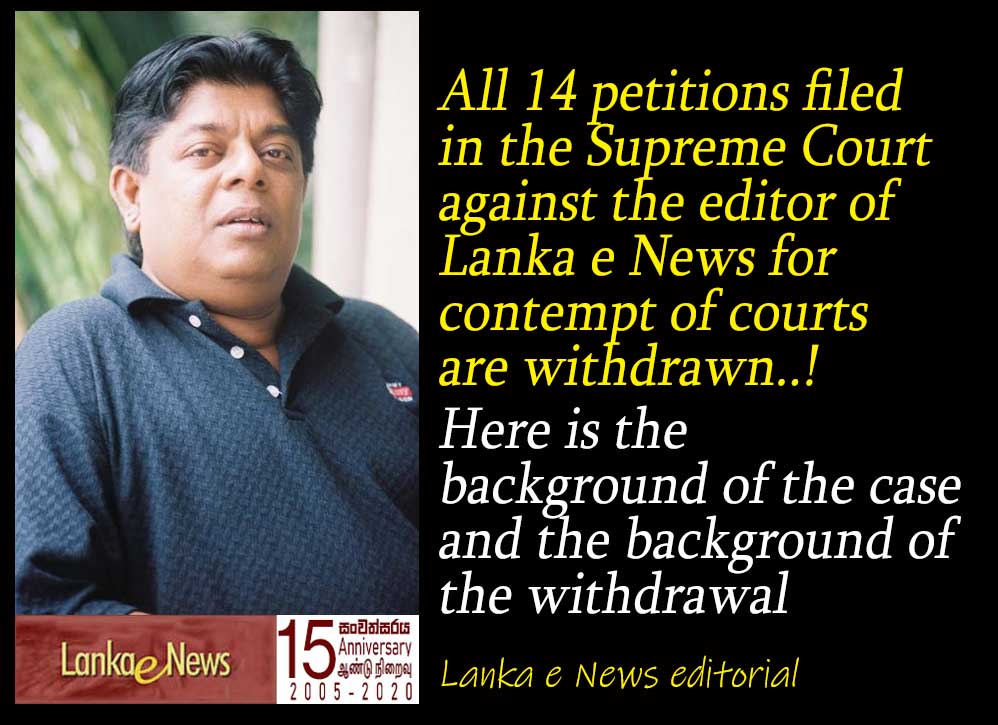 (Lanka-e-News - 27.Aug.2020, 11.30PM) All 14 petitions filed against Lanka e News editor Sandaruwan Senadheera in the Supreme Court for contempt of court were withdrawn by petitioner Ovitigalage Madura Vithana (current PJP MP) when the case was called on Monday 25th. At the outset of the case, the three Supreme Court judges ended the case when the plaintiffs informed the court that they would withdraw the petitions. The case was taken up by the Supreme Court judges L.T.B Dehideniya, Yasantha Kodagoda and E.A.G.R. Amarasekera.

The editor of Lanka e News Sandaruwan Senadheera, Chandrasiri Seneviratne, Attorney-at-Law, and the Bar Association of Sri Lanka has been named as the main defendants in the case. Attorney-at-Law Upul Kumarapperuma appeared for the respondents who received the notice. The case, which was filed on November 23, 2016, could not be called unable to give the summons to the Lanka e News editor for nearly four years until day before yesterday when the case was adjourned time to time. Cases of contempt of court cannot be heard without giving notice to the respondents. An attorney could not appear for Lanka e News due to the lack of submission of the notice.

It is difficult to prove even when the case is heard However, we believe that even if the case is heard, it cannot be proved that Lanka e News has insulted the court because all the above 14 petitions contained criticisms of the conduct of several judges, citing Lanka e News. It is true that these criticisms are harsh, but at the end of each article, it was stated that the misconduct of these judges would damage the country's judiciary and undermine public confidence in the judiciary. Therefore, they cannot be considered as contempt of court. They are criticisms made in good faith for the need of a healthy judiciary in a country. If necessary, each judge could file a personal defamation suit against Lanka e News. However, not a single judge filed a civil case against Lanka e News or its editor as they cannot prove the courts that they had been insulted due to their misconduct.

Who is behind this case?

However, Madura Vithanage, who filed the case, cannot be considered as someone who had a real need to file the case. He was just a pawn used by powers who hated Lanka e News. Maithripala Sirisena and Killy Maharaja, the world's foremost disgusted leaders, were among those who hated Lanka e news at that time. Madura Vithanage, the then Deputy Mayor of the Kotte Municipal Council, was a batch mate of Shiral Lakthilaka, a lawyer who was Sirisena's senior adviser and coordinating secretary at the time. Hemantha Warnakulasuriya, Attorney-at-Law, took up the case on behalf of Kili Maharaja as his own work. But after the case was filed, he succumbed to cancer. Hemantha Warnakulasuriya's animosity with Lanka e News was due to the exposure made by e News about his fraudulent collection of money for the 'Api Wenuwen Api' fund during his tenure as Ambassador to Italy. The CID launched an investigation into the fraud, but it was thwarted by his political machinations.

By November 23, 2016, when the case was filed, Sirisena launched a massive attack on Lanka e News. November 18, 2016, on the instructions of Sirisena, then Minister of Justice Wijedasa Rajapaksa, made a statement in Parliament against Lanka e news stating that its editor is causing serious damage to the independent judiciary in Sri Lanka and that it was a national danger and He would take an international warrant against its editor and he would be brought to Sri Lanka from anywhere in the world and prosecute. The case was filed on the 23rd and on the 25th Magistrate Kavindra Nanayakkara, who was severely criticized by Lanka e News, issued a red warrant for the arrest of the Lanka e News editor on the charge of contempt of court. The CID was ordered to execute the red warrant with the assistance of Interpol. It was the same Hemantha Warnakulasuriya also intervened for the case. The CID later told the court that an Interpol warrant cannot be obtained without a criminal charge. Accordingly, the Interpol warrant was dropped. Following that it was only the 14 petitions that were left by Madura Vithanage which was withdrawn on Monday.

What was the hatred with Lanka e News?

Sirisena and Killy Maharaja were angry with Lanka e News for no other reason than Lanka e News exposed and foiled the 'Russian warship deal' that the two struck together. Sirisena’s commission was not small but a chunk of USD 10 million. At that time Sirisena had given a license to Kili Maharajah to import arms. Due to the intervention of Lanka e news, Sirisena failed to achieve the warship deal as they planned to send Kili Maharaha’s director Shevan Daniel to Russia. Following that both started this hatred mission against Lanka e news and wasted the precious time of the judiciary.

Now Sirisena has become a piece of shit. Hemantha Warnakulasooriya is in the afterlife. Kili Maharajjah cannot make any arms deal with the current president because Gotabhaya has plenty of people to do so. As long as Dilith Jayaweera is in power, Killy Maharaja will not be allowed to approach Gotabhaya. So who would help Madura Vithanage? He will not be liked to drag a case of another against Lanka e News.

Finally, we express our condolences to Attorney-at-Law Chandrasiri Seneviratne, who had to go back and forth to the courts for four years for writing a letter to Lanka e News. We thank Attorney-at-Law Upul Kumarapperuma, who appeared for him free of charge and President's Counsel J.C. Weliamuna.

Self degrading Wijedasa’s rabble rousing speech : LeN replies and asks him to substantiate his allegations