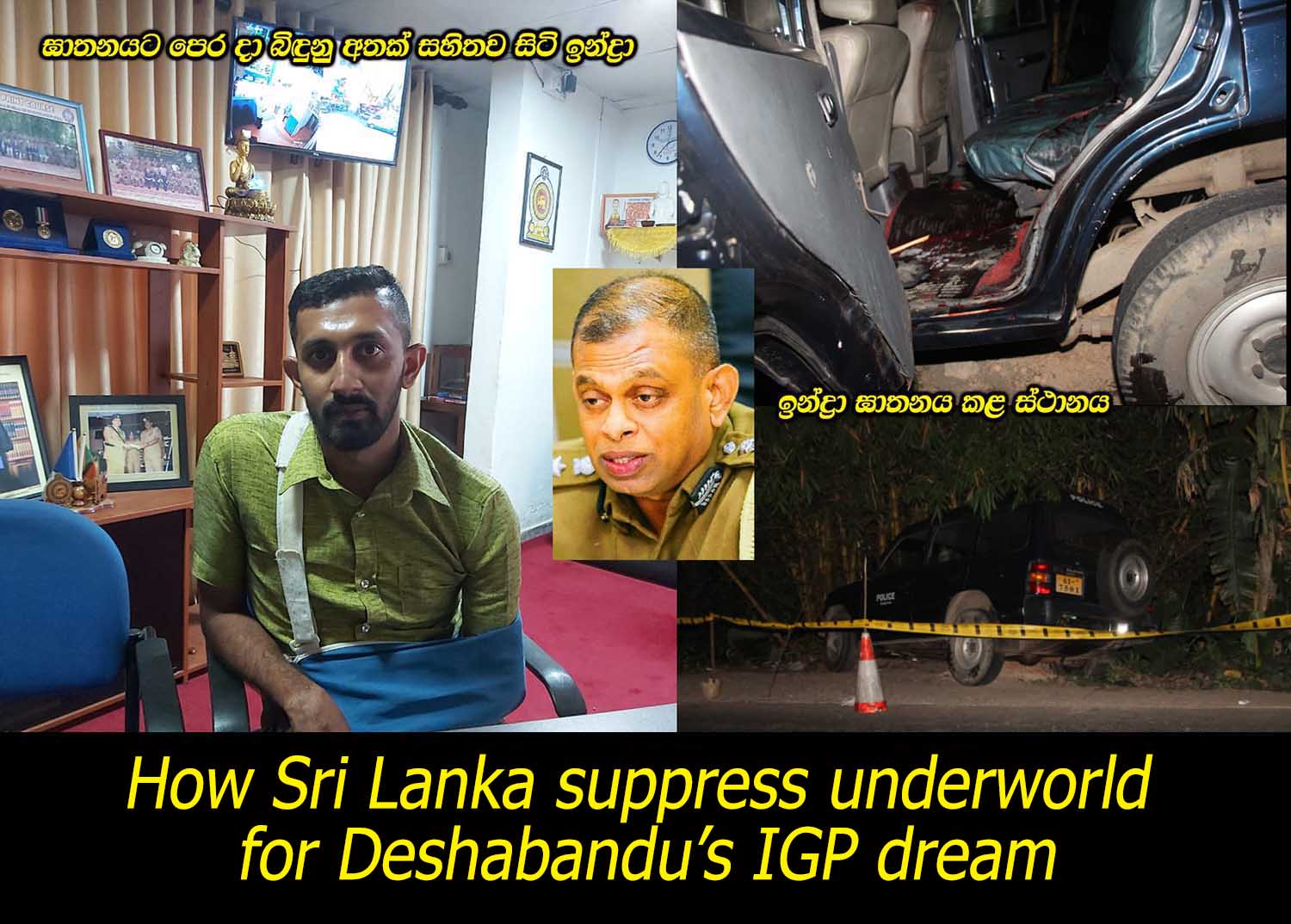 (Lanka-e-News -03.Sep.2020, 10.45PM) Since Gotabhaya took over the presidency, about seven people linked to the underworld and the drug mafia has been taken to the police station to show the infamous weapons and shot dead by unknown gunmen. Only God knows how many has been sent to heaven in the history of Sri Lanka especially during 2005 – 2015 when the country’s rule of law fell from frying pan to the fire.

How did the broken arm man can squeeze a neck?

Indrajith Vajira Kumara alias 'Indra', an underworld gangster was arrested on the 28th by the police.   His left arm was broken in an assault made by police after his arrest. The following photograph was taken at the Navagamuwa Police Station after his arrest and assault. After he was killed by the police, the police said that Indra was shot by the police when the latter tried to strangle the driver while he was being taken away in a police jeep. Until then his left arm was broken. How did a man with a broken left arm can squeeze the driver's neck?

Many information and conspiracies of those murders and murderers would be concealed by murdering the arrested underworld gangsters. Deshabandu and Meryl Ranjan Lamahewala have replaced Anura Senanayake and Vass Gunawardena of those days. While people are sleeping in rajapaksa mania, human rights activists, including civil society organizations too are asleep. If that is so, the day is not far away when the shooting of Ladiya, Chamiya, and Indra would be directed at ordinary civilians, journalists and civil society activists in the future.

Prior to that, it is the duty of the law abiding police podda to write down what he sees.

From the day “sir” came to the presidency, like everywhere else, the big bosses of the police were in the process of scoring points. Among them, Senior DIG Deshabandu Tennakoon in charge of the Western province, who has the dream of becoming an IGP, has taken a leading position. Deshabandu, who disrobed his monk and was a master of transcendental and worldly intrigues, supernatural and secular machinations, wanted to capture the mind of the underworld and the drug mafia and killed several suspects because Deshabandu believed that the more he kill, the more he could win his “sirs” heart.

How Deshabandu inflicted the STF..

Initially, the biggest obstacle was the then Commanding Officer of the Police Special Task Force, retired Senior DIG MR. Mr. Latheef. Mr. Latheef said that leading STF officers were making a positive move against drugs and the underworld in accordance with the law. With Latheef's retirement, his successor was DIG Lionel Goonetileke. Lionel Goonetileke, who was trying to carry on Latheef’s work without noise and smoke, had to face Deshabandu's hindrances. Deshabandu pressured STF officers to kill Kanjipani Imran’s disciple in connection with a murder in the Maligawatta area. Deshabandu has publicly leveled absurd allegations against DIG Lionel Goonetileke, who has vehemently denied killing a suspect illegally in custody. Due to that DIG Lionel Goonetileke lost his STF seat as a result of a conspiracy made by Deshabandu with a group of STF officers whom Latheef kept away from drugs and underworld operations due to various corruption allegations.

Subsequently, DIG Waruna Jayasundara, who called Deshabandu "Sir", became the Commander of the STF. For the first time in its history, the STF, which has been a paramilitary force of the Sri Lanka Police since its inception in 1983, came under the command of a Deputy Commander-in-Chief of the Western province police.

Although Waruna Jayasundera had earned a reputation as a talented officer, he had to please Deshabandu due to the possession of a file of Waruna’s madame. Waruna Jayasundara should not become so lowly. The police little podda know where Deshabandu's hidden files are on the police shelf. When Deshabandu was the police inspector at the Nugegoda police, he used an official vehicle of the police for his personal use and damaged the vehicle which incurred a loss of Rs. 900.000. which is still an unresolved issue.

Due to Deshabandu's arbitrary intervention, the Police Special Task Force has collapsed like never before in history.

Some skilled officers are tired and some officers has split into groups and conspiring against each other. Fearing that the true situation of the STF would be revealed, Waruna Jayasundera had recently addressed a group of journalists and requested them not to reveal the true facts regarding the STF. Waruna Jayasundara has done this on the instructions of Deshabandu.

In addition, Deshabandu advises Sisira Paranathanthri of Mawbima newspaper and Mahinda Ileperuma of Aruna newspaper on a daily basis on the 'headline’ news published.

A group of unidentified gunmen..

A group of STF officers whom the former DIG Latheef removed due to many corruption allegations has been called again by Deshabandu. The duty of these officers is to shoot and kill selected suspects more than apprehending them by law and add more human lives to Deshabandu’s dream IGP post. Police constables attached to the Peliyagoda Anti-Corruption Unit is responsible for the lives of the suspects who escape from the STF. In addition, a group of unknown gunmen' have come to the fore. It was that 'unknown set' that killed the SF Lokka in Anuradhapura recently.

Officers who commit murders and any other heinous act should take into account the fate of Anura Senanayake, Vass Gunawardena and STF ASP Sisira Kumara who played this game during vandalizing decade.

What is happening is creating a monopoly to Kudu Duminda..

Diving into the dream to become the IGP that will never come true, Deshabandu is handing over the monopoly of the underworld and the drug mafia to his long time friend Duminda "Sir" who is imprisoned for life. Deshabandu's killing list includes underworld criminals and drug traffickers against the "Catboy Cartel". He catches drugs only belong to Kudu Duminda’s competitors.

Apart the suspects killed so far “Harak kataa”, Potta Wajira’s group and Sumedha are on top of Deshabandu’s killing list. All those are underworld gangsters who are against Kudu dumindas Catboy Cartel

Drugs and the underworld mafia must be suppressed. This cannot be done by killing a selected group of underworld mafias but duly enforcing the law properly. Although there are adequate laws, the weakness lies with the officials and institutions that enforce them. Killing a select group of suspects can give a temporary fun', but the underworld and the drug mafia cannot be suppressed. If it is possible one cannot find a single underworld or a drug dealer for the amount of killings carroed out during the vandalizing decade.