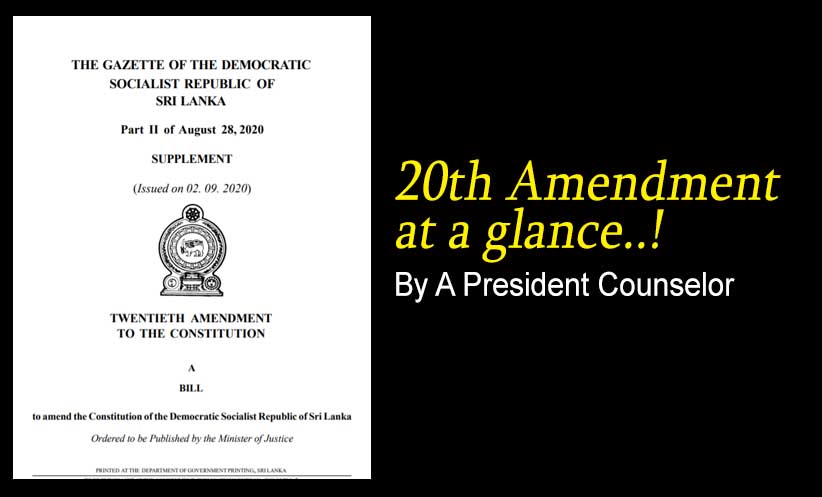 ⋆ Basically, brings back 18A, except the reduction of the terms of President and parliament to five years, 2-term limit for the President and right to information

⋆ Assignment of subjects and functions a matter for President; PM has no role

⋆ President can remove PM or any minister or deputy minister

⋆ President can hold ministries; any subject not assigned is for the President

⋆ No limit on the number of Ministers and deputy ministers

⋆ As R. Premadasa said PM will again be a ‘peon’ like he was under JR and DBW was under him; also like DM Jayaratne under MR

⋆ Full immunity for President for actions as President; not subject to fundamental rights jurisdiction of Supreme Court as under 19A

⋆ President only seeks observation of Parliamentary Council in making appointments to the judiciary, high posts and independent commissions

⋆ The rationale behind the Constitutional Council was that there would be a national consensus on such appointments; now President can make appointments at will

⋆ 19A fixed the retirement age of AG and IGP at 60 so that they need not go to the President for extensions after reaching 58 thus giving them much-needed independence; this is abolished

⋆ Parliament can be dissolved by President after one year; if the previous Parliament completed the full 5-year term, he can dissolve even before one year

⋆ 19A increased the period after which a Bill can be presented to Parliament after gazetting, to 2 weeks; this was done to give citizens enough time to study a Bill and challenge in the Supreme Court; this is reduced to one week;

⋆ 19A abolished urgent bills; 20A seeks to bring them back; the danger in urgent bills is that they are not published in the Gazette but sent direct to the Supreme Court; citizens do not get a chance to study Bills and challenge them; enough instances of Supreme Court missing obviously unconstitutional provisions; since we do not have post-enactment judicial review, such unconstitutional provisions cannot be challenged after the Bill is certified by the Speaker