Defend Constitutional Democracy in Sri Lanka: An Appeal to Parliamentarians of all Political Persuasions 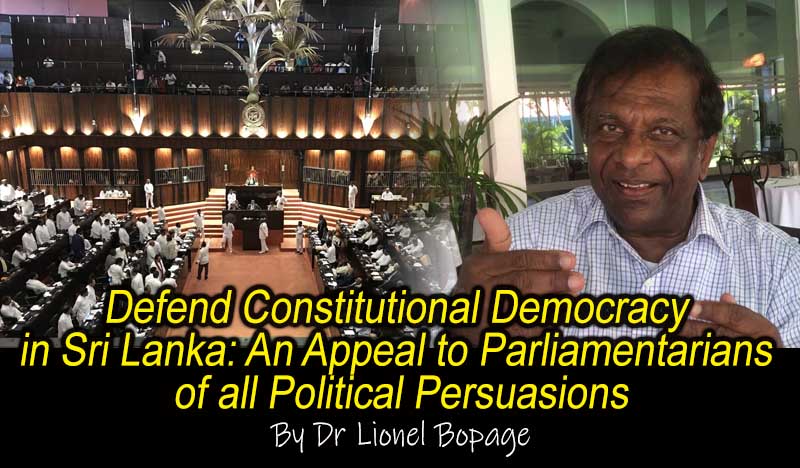 (Lanka-e-News -28-Sep.2020, 9.20PM) The Twentieth Amendment to the Constitution Bill introduced in Parliament early this week has drawn unprecedented opposition from various concerned citizens, intellectuals and civil society organisations. Even members and supporters of the Government have expressed grave concerns. And rightly so. The mandate given to the government at the August general elections ‘to get things done’, cannot be construed as an endorsement for an all-powerful Executive President above the law. In a democratic setting no rational citizen would want a President who is not answerable to the Parliament and Courts enjoying total immunity from prosecution. Besides, this matter was not put to the voters categorically before the election, thus the Bill is contrary to the mandate of the people. It not only reinstates the powers that were removed by the 19th Amendment but further extends towards autocracy.

The Bill contains several amendments that are detrimental to a participatory democracy of the country. Some of them are:

(a) Consolidation of power in the office of the Executive President and removal of all the checks and balances on presidential powers;
(b) Weakening/abolition of independent commissions such as the Election Commission, Audit Service Commission, National Procurement Commission and Bribery Commission;
(c) Granting President the authority to dissolve Parliament at his will any time after the first year of its term, and even within one year if the pervious Parliament had not been dissolved earlier;
(d) Taking away the fundamental right to challenge official acts of the President under the fundamental rights jurisdiction of the Supreme Court; and
(e) Removal of the Auditor General’s powers to audit government owned entities such as SriLankan Airlines, thus virtually emasculating the National Audit Commission.

These far-reaching changes will result in the erosion of constitutional safeguards available for ensuring accountability and transparency of the organs of government. The disempowerment of Parliament will effectively stifle the people’s voice, franchise and political discourse on matters of public importance, and enable the government to function with no accountability to the public.

More importantly, the proposed amendments, if adopted, will infringe the fundamental rights, freedoms and sovereignty of the people – violating the entrenched provisions of Article 83 of the Constitution, and therefore will have to be voted on by the people at a Referendum.

Further, with the President seemingly made above the law and with sweeping powers to appoint individuals to key institutions, the independence of the judiciary is at stake and the potential for abuse of executive power is greater than ever. If human rights, equality, justice and peace is to prevail in our country, it is absolutely fundamental to have an independent judiciary with Chief Justice and other justices appointed by an independent commission, constituted by both government and opposition parliamentarians and nationally respected and learned civil persons.

We, therefore, implore all Sri Lankan Parliamentarians that this is the time to be vigilant and show their integrity and foresightedness, and avert the formulation of a despotic state. You owe it to the people who elected you to serve – for they never foresaw the Twentieth Amendment would be coming in the present form.

We urge you, as law makers, not to let Sri Lanka down. Instead, put the voters first, reject the Bill in its present form, debate it thoroughly, make judicious amendments at the Committee Stage, and cast your votes according to your conscience.

If you fail to prevent the passage of this Bill, democracy, human rights and rule of law will soon come to an end, and development and prosperity would be doomed to failure.