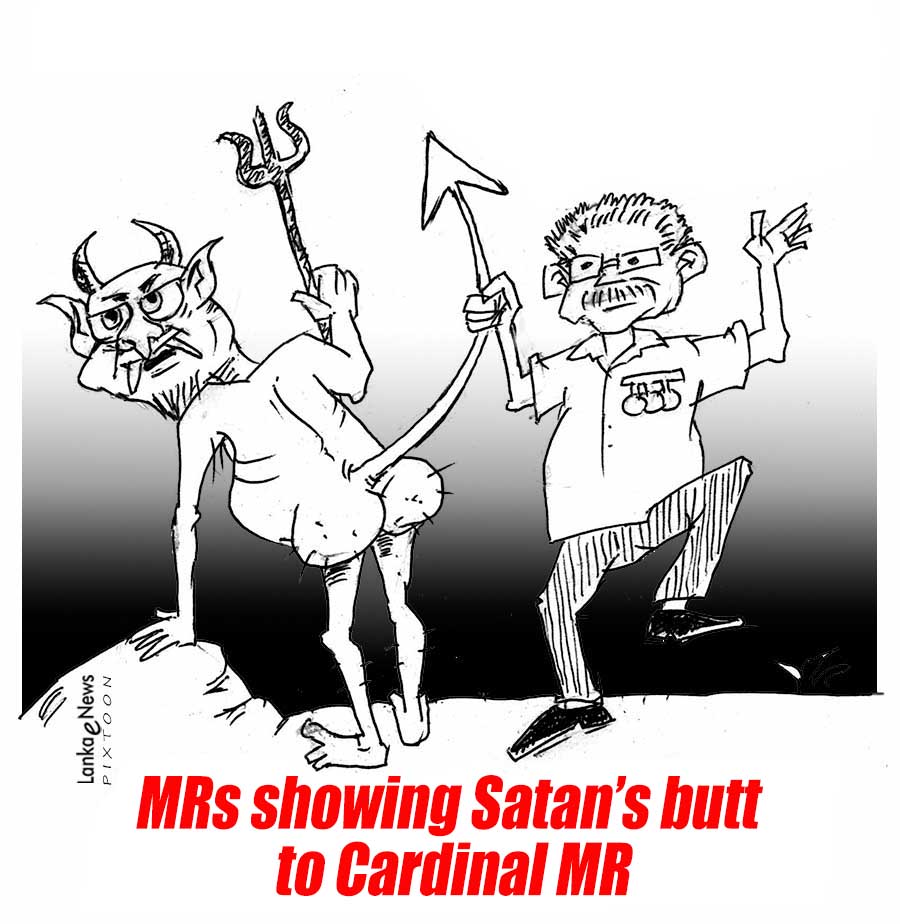 (Lanka-e-News -06.Oct.2020, 7.30AM) Cardinal Malcolm Ranjith showed his displeasure before the media when Medamulana Rajapaksas exposed Satan’s ass to him. That was none other than Riaj Bathiudeen, the brother of the former minister Rishad Bathiudeen, who was earlier arrested and detained by the Rajapaksa government for five months alleging serious evidence in connection to the Easter bombing but suddenly released in absence of evidence following a sudden meeting of Rishad bathiudeen and Chamal Rajapaksa.

Police spokesman who appeared before Dilith Jayaweera's sordid Derana media before the parliamentary election said there is strong evidence that Riaj had direct links with the Saharan. He said that in the immediate vicinity of the bombing, Riaj had talks with one of the bombers at a certain hotel, and a special welfare societies had been formed and worked with the bombers to hold official positions in those companies, and that the bombers had invested in those companies, police spokesman said this in front of the media at the time.

In addition, one  Director of State Intelligence in front of the GR's Presidential Commission for investigating the Easter attack, revealed more serious information about Riaj Bathiudeen last June. He said In 2017, a warrant was issued for Saharan, despite this Riaj Bathiudeen has helped Saharan to escape to India via Mannar. On March 22, 2019, a month before the bombing, the director had informed the then Secretary of Defense and the Chief of National Intelligence in writing about the danger of Riaj Bathiudeen helping a person on a warrant who could influence national security to leave the country. He revealed this at the commission.

How could the police suddenly lose all evidence about a person who had so much evidence?

A few days before Riaj’s release, Rishad Badurdeen and Chamal Rajapaksa had a very close conversation as both were chief guests for the opening ceremony of an auditorium in Mannar, where they saw the current Defense Secretary Kamal Gunaratne shaking hands with Rishad like a puppy, while the latter was waiting to apprehend Bathiudeen sometimes ago. Accordingly, rumors spread that Rishard and his party would support the government in the forthcoming 20th Amendment. At the same time, Rishard's brother, who had been on a detention order signed by Kamal Gunaratne for 5 months, was acquitted.

Every animal in the world without hooves and horns knows the politics of the Rajapaksas in Medamulana is a politics born full of lies, but God may have forgotten to inform Cardinal Malcolm Ranjith perhaps the God is aware the latter is an obiedient follower of MR Satan who gormandize their scraps and whitewashing them. At the same time, Rishard's brother, who had been on a detention order signed by Kamal Gunaratne for five months, was acquitted.

Thus, even before the blood of the Easter bombing dried up, there was no single doubt sparked in Cardinals  dumb brain when GR from abroad said 'I am running for the presidency' or to comprehend a possible link between the Easter bombing and the Medamulana. Instead Cardinal Malcom dumped all the impediments to the Good Governance. When the Rajapaksa came to power Malcolm cardinal thought the Rajapaksas would find the root cause of the Easter bombings and slay all the demons and took refuge in Medamulana and misled the catholic community.

Alas, with the release of Riaj Bathiudeen, Cardinal MR's eyes glazed over, he must have supposedly realized that the Rajapaksas in the Medamulana had shown him Satan's butt. Cardinal MR held a press conference on the 3rd and lamented before the people the anger of the Catholic community who have a brain and a soul in this country. From the press conference we can see Satan’s butt from Cardinals face which MR showed the Cardinal.

Below is the press conference of Cardinal Malcolm